‘The worst thing I’ve ever been through’ 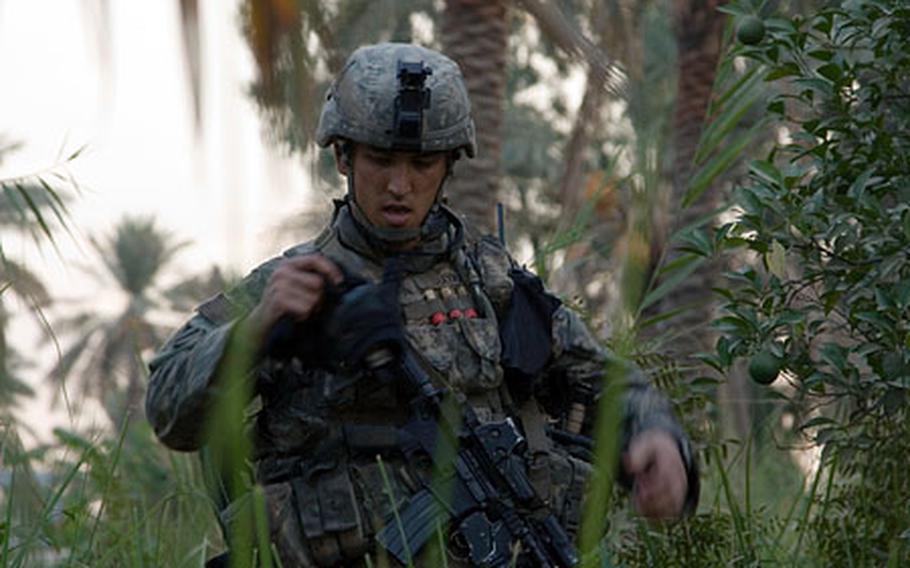 To view more images, scroll to the bottom of the page or . (Drew Brown / S&S)

At 2 a.m., three platoons from Company A, 1st Battalion, 30th Infantry Regiment, along with a detachment of military police, were to proceed in vehicles about a mile up the road, dismount, then move stealthily on foot to Abuwaitha, a predominately Sunni village on the Tigris River some 10 miles southeast of Baghdad.

By moving in darkness, the soldiers hoped to maintain the element of surprise. The target of the operation was one Dr. Ismail, a shadowy personality reputed to be the top al-Qaida figure in the region allegedly responsible for numerous attacks and enforcing strict Islamic rule on the local populace.

The soldiers already had pinpointed several houses where Dr. Ismail and his relatives reportedly lived. The plan was to isolate those objectives, search each one thoroughly, and question the inhabitants. Perhaps they would get lucky and uncover information that would eventually lead to Dr. Ismail&#8217;s capture. Maybe they would get really lucky and actually nab the guy.

Capt. Eric Melloh, Company A commander, figured that it would take a little more than an hour for his troops to cover the 1.5 kilometers to Abuwaitha on foot.

Instead, it took almost five hours.

While most of Iraq is sprawling cities or vast desert, the lush, irrigated farmlands along the Tigris and Euphrates rivers are thick with date palm groves, fruit tree orchards and fields teeming with corn, wheat, squash, sunflowers and other crops. The land is a patchwork of irrigation ditches, hedgerows, and tall, thick reeds.

It was in this environment that Company A found itself in the moonless hours before dawn Tuesday.

Stretched out in a long, single-file line, the troops set off down a dirt road flanked by a mud-brick wall on one side and a towering barrier of dense vegetation on the other.

They headed toward the river but soon turned off, heading cross-country, pushing through the undergrowth, hopping or splashing through irrigation ditches and wrenching their ankles in the furrows between towering cornstalks and sunflowers.

The terrain drew inevitable comparisons to the jungles of Vietnam 40 years ago. Stopping and kneeling for 10 to 20 minutes at a time, while the lead elements of the column encountered one obstacle after another, it was hard for many of them to believe that they were still in Iraq.

The night seemed to stretch on forever. At one point, 1st Lt. Ismail Khan, 27, of Houston, Texas, pitched forward down a slope, twisting his ankle along the way. He walked the rest of the way with a slight limp, toughing it out.

It was already close to 7 a.m. by the time the troops reached the first house. The family inside was up, readying breakfast.

Soldiers took the women and children to one side of the house, men to the other. Search parties looked for weapons and suspicious items.

They found a .22-caliber rifle and a rusty AK-47 with four magazines covered in thick layers of dust. Two of the magazines were taped together, raising eyebrows among the soldiers. A box of electronics parts also was hauled out, along with a spool of copper wire. The troops found a cell phone that appeared to have been stashed away. In a nearby shed, other soldiers found chlorine and various chemicals, plus a protective mask. The troops believed they&#8217;d stumbled on an insurgent bomb-making factory.

But the men of the house protested, offering various explanations for the items in their possession. The chlorine, they said, was used for purifying water, since the water treatment plant had shut down. The gas mask was for working with the chlorine.

Staff Sgt. Leroy Hosely, 28, of Redding, Calif., produced a curious item. A packet of AA batteries taped together and wired to a small switch of some kind. Hosely was convinced that the device was designed to be used as part of a suicide vest, but no such vest had been found.

One of the men offered up the location of a probable bomb buried in the road about 500 meters from the house. Sgt. 1st Class Michael Paul, 32, of Baton Rouge, La., asked if the man would be willing to show them the bomb&#8217;s location, but the man begged off, afraid neighbors would see him cooperating with U.S. troops.

At 7:30 a.m., a loud explosion rocked the village. A Buffalo mine-clearing vehicle had been struck by a hidden bomb. The vehicle was damaged, but a report soon came over the radio that the crew was OK.

And so the morning continued, with the soldiers clearing several more houses, questioning the residents, photographing and taking down the names of the men. But the target of the operation was nowhere to be found. Dr. Ismail, it seemed, had disappeared from the village six months earlier and no one had seen him since.

By 9:45 a.m., the sweep was over. Four men had been detained. Local villagers pointed out three hidden bombs.

The soldiers made their way back through the bush, this time by a slightly different route. They reached the vehicles about an hour later. By then, the sun was scorching, the temperature already well over 100 degrees.