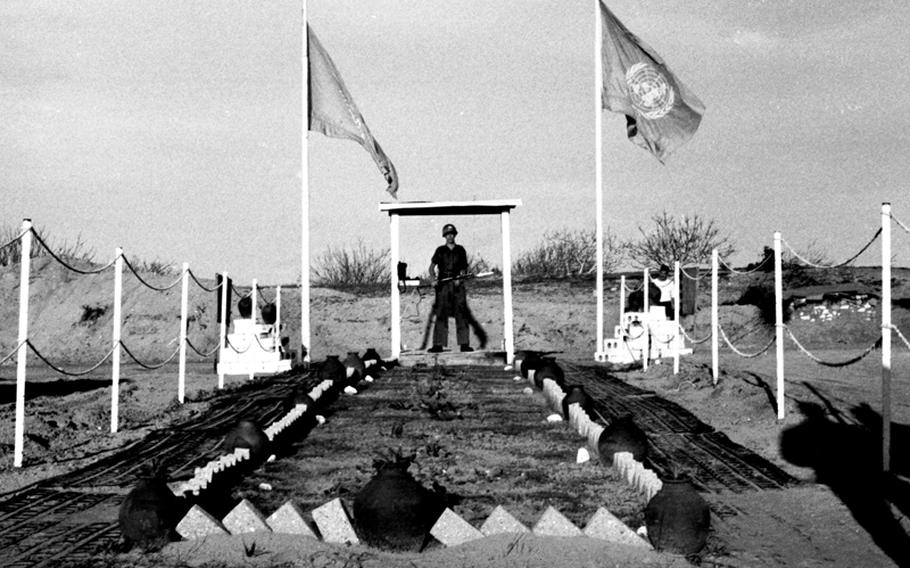 Buy Photo
A well-guarded U.N. border crossing on the Gaza Strip in 1958. (Merle Hunter/Stars and Stripes)

THE UNITED NATIONS Emergency Force (UNEF), keeping peace in the Gaza Strip and along the Israeli-Egyptian frontier, is undoubtedly the strangest army the world has ever seen.

Made up of 5,600 men of eight different nationalities, UNEF is the world's first international police force, described by UN Secretary General Dag Hammarskjold as a "unique and pioneering peace effort."

Hastily assembled and thrown into position between the embattled armies of Israel and Egypt 15 months ago, UNEF has proved its mettle and done its job - the force has kept the peace.

An "army of peace" - and a polyglot army at that - UNEF just doesn't do things the way an ordinary army does. The most startling differences are in the fields of intelligence and supply.

UNEF has doffed the military's traditional cloak of secrecy and plays its hand wide open. It seems to operate more on the premise that "it pays to advertise" - and judging from UNEF's record, it apparently does pay.

All UNEF outposts along the 25-mile long Gaza Strip and the 133-mile long Egyptian-Israeli frontier in the Sinai Desert are plainly marked and publicized, as are its positions in the 117-mile area to the south along the Gulf of Aqaba.

Wearing berets or helmets of distinctive UN blue besides, the troops man their lonely desert observation posts by day and walk the frontier at night to prevent border crossings by infiltrators or raiding parties of either side.

The sentries patrol only on the Egyptian side of the border since the Israelis have never consented to allow UNEF troops to set up operations on their side.

In daylight, farmers harvest their crops right up to the line on either side without fear of attack, but after sundown no one on the Gaza Strip is permitted to approach within 550 yards of the frontier.

By advertising the fact that they're in the area, UNEF has succeeded in preventing border crossings and has kept incidents in the former strife-torn Gaza Strip down to a minimum.

"We're here guarding a sort of picket line not to be crossed politically," Burns explained. "The people on both sides have come to realize that as long as they don't try to cross the line, things will remain quiet."

The Danes and the Norwegians must have their sardines and blue cheese; the Indians want curried rice, the Swedes get special rye crackers and the Colombians want spicy Spanish foods.

The man who parcels all this out is young Capt Harsharan Singh, a bearded blue-turbaned Indian Sikh who commands the big UNEF supply depot at Rafah on the southern end of the Gaza Strip.

The basic menu for all the troops, Singh explained, consists of U.S. Army five-in-one rations shipped out of Naples, meat from Australia and dairy products from Scandinavia.

In addition to knowing what the troops do want, Singh has to figure out what they do not want. The Indians, for example, shun beef, and the Indonesians, being Moslems, avoided pork when they were part of the force.

Despite differences in tastes, UNEF is still the best-fed army in the world, according to Singh. He pointed out that each UNEF soldier gets 6,000 calories per day, as against the U.S. Army's daily ration of 5,000 calories.

The Yugoslavs are the biggest eaters. Their daily potato ration is 24 ounces per man, double the average UNEF spud quota, and they consume four times as much fruit as any other contingent.

Besides getting supplies from all over the world, Singh has to deliver them to troops in 22 installations stretching across the desert to the southern tip of the Sinai Peninsula. Helping him keep things moving are three officers, 79 enlisted men and 30 local employees.

But the UNEF oddities don't end here. The 30-bed hospital at Rafah, staffed by Norwegians and Canadians, is probably the only jointly operated military hospital in the world.

And the UNEF official band is a rarity too. It's an authentic regimental band from the Indian Army and comprises 25 colorful Sikh bagpipers, plus a drum and bugle corps as well.

The language barrier has been broken by UNEF. Most of the officers speak either French or English in addition to the native tongue, and English has turned out to be the working language of the force.

Heading toward a border checkpoint to meet with a Swedish observer, Hipp called on his jeep radio and explained in a deep Southern drawl that he was on his way.

The Swede apparently heard the message, but being unfamiliar with the dialect responded with: "Please speak English and speak slowly."

The U.S. has no troops in UNEF proper, in line with the General Assembly provision at the outset that the force should not include personnel from the five nations which are permanent members the Security Council &mdash; the U.S., France, Britain, Russia and Nationalist China.

American civilians out of UN headquarters in New York, however, do work at UNEF's Gaza headquarters. Among them are John Rawson, UNEF information chief, who edits the weekly Sand Dune, "the Mideast's biggest little newspaper," and Joseph Noia, UNEF's civilian welfare officer.

The hard core of the force is made up of about 1,000 Canadians and 900 Indians, the only regular soldiers in UNEF and the only ones who have to put in a full year on the Strip before rotating. The other contingents are composed of national service recruits and serve six months only in UNEF.

All the men get per diem in addition to their regular pay and the morale of the force is generally high. Their bigger foe is boredom and of the 14 casualties UNEF has sustained since its inception, the majority have been the result of land mines or vehicular accidents.

The cost of maintaining the force last year was approximately $25 million. The U.S. paid roughly 30 per cent of this, plus making up the 1957 deficit of $12 million.

"Here is one area of the world where tensions have decreased," said Ambassador James Wadsworth in presenting the year-end check. "We owe a great deal to the force devotedly serving us all in this constructive and effective action for peace."