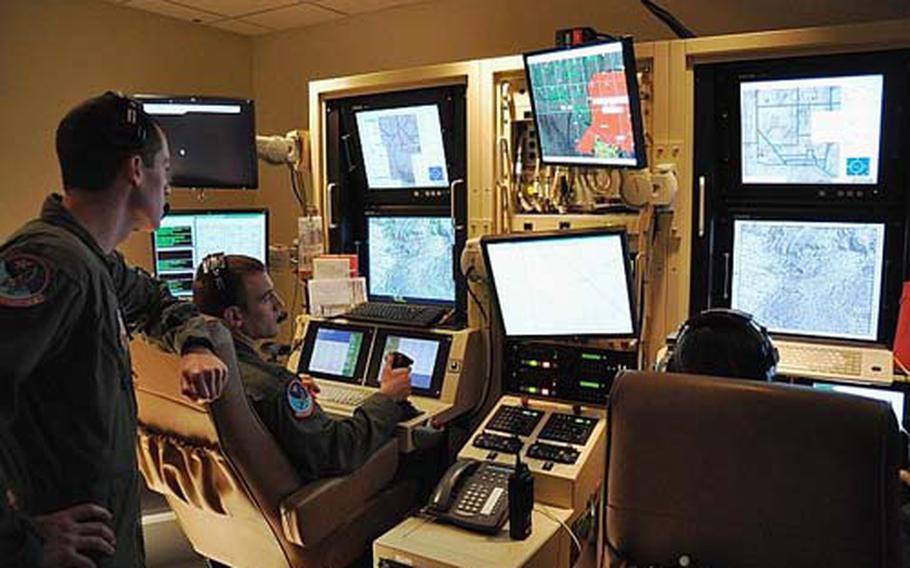 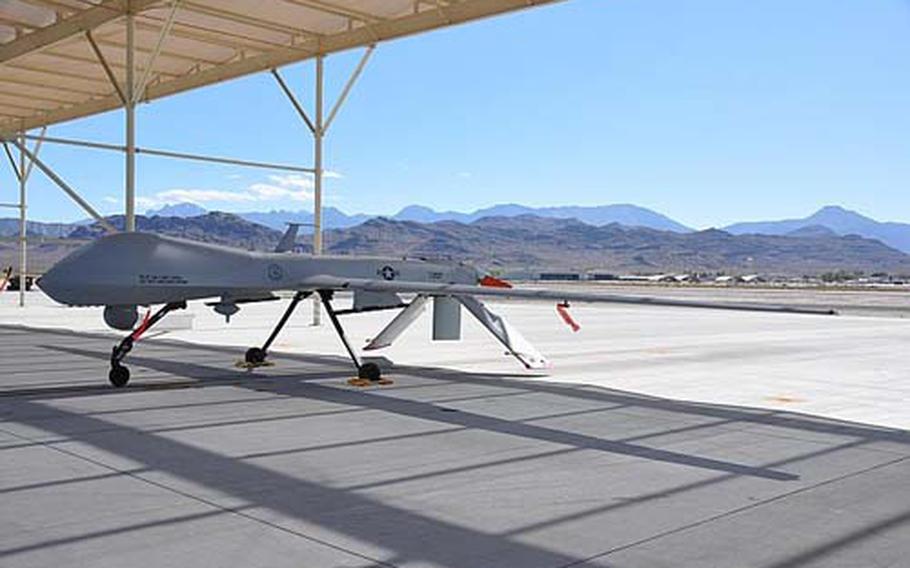 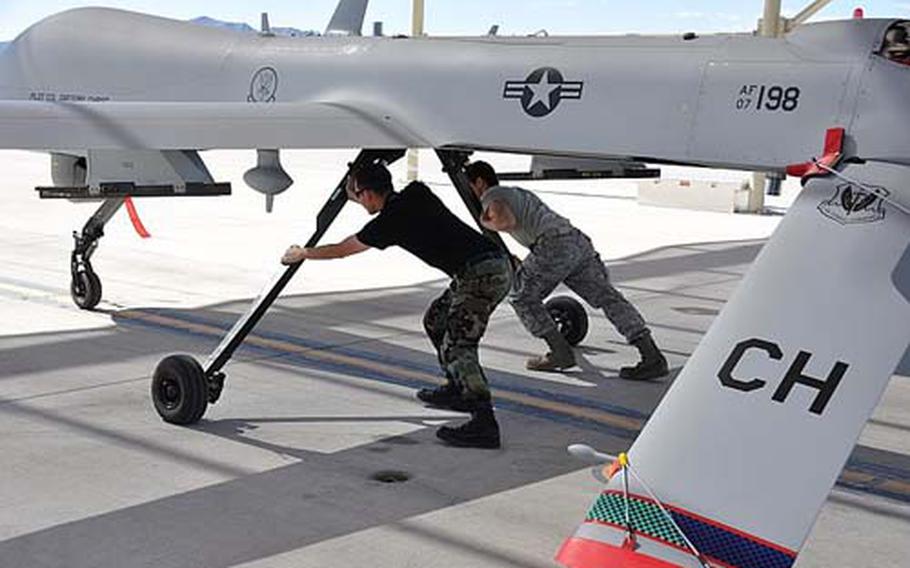 CREECH AIR FORCE BASE, Nev. &#8211; The daily work duties are arduous, involving close tracking of insurgents, patiently watching them dart in and out of shelters and, if the opportunity presents itself, occasionally raining missiles down on their heads.

But at the end of each day, the Air Force crews who control the Predator and Reaper drones circling high above the battlefields in Afghanistan and Iraq stand up from their Naugahyde chairs, emerge from their cramped trailers on this remote Nevada air base and climb into their cars for the drive home, arriving in time to tuck their kids into bed.

Call it combat as shift work, a new paradigm of commuter warfare that is blurring the historical understanding of what it means to go off to battle. And the strain of the daily whiplash transition between bombs and bedtime stories, coupled with the fast-increasing workload to meet relentlessly expanding demand, is leading to fatigue and burnout for the ground-based controllers who drive the drones.

Col. Pete Gersten, commander of the 432nd Air Expeditionary Wing at Creech, said that when he deployed as a fighter pilot to Iraq and Afghanistan, he would kiss his wife, hug his children and then emotionally detach.

Gersten wanted to focus on the fight and keep his home life out of it.

At Creech, &#8220;that same compartmentalization takes place but you have to change compartments more rapidly,&#8221; he said.

As in twice a day for years.

Having to balance being active in a war zone and fully present at home has stressed some marriages. The domestic issues prompted the previous commander to make a couples counseling program available.

Friction at home can stem from just that simple question upon walking through the door: &#8220;How was your day?&#8221;

&#8220;Combat is a very personal event,&#8221; Gersten said. Getting questions at home at the end of each shift means &#8220;that compartment is being breached to a degree.&#8221; Even for those willing to share that aspect of their lives with their spouse, they feel limited by the secret nature of their job.

The mission also requires hyper vigilance, an increased level of tension that doesn&#8217;t go over so well at home, Kent said.

Most pilots and sensor operators say the 40-minute drive between Las Vegas and Creech helps them flip the switch. The neon buzz of The Strip fades, the radio stations go fuzzy, and the buildings disappear. The physical change from bustling city to empty, barren desert is fitting.

Each has his own ritual and routine to mentally transition from spouse and parent to combat pilot, from home life to war.

Some pilots have been at Creech Air Force Base, where most of the drone operators are based, for six years. The tour lengths can be quite fluid and the mission is only growing.

Those who fly drones are sometimes derided as being part of the &#8220;Chair Force&#8221; and as being too distanced from the fight to really be a part of it.

The amount of time spent surveilling an area &#8212; sometimes hundreds of hours are devoted to a single mission &#8212; creates a greater sense of intimacy than with other aircraft, Mathewson said.

One of the great advantages of drones is the ability to loiter. But that also means crews spend a lot of time watching the destruction of war.

Unlike an F-16 pilot who would engage the enemy and then return to base, the drone crews do lengthy battle damage assessments, Gersten said.

The stress isn&#8217;t limited to the pilots. Sensor operators, many of them first-term airmen, control the drone&#8217;s camera and hold the guiding laser on a target, making them an integral part of the kill chain.

The mission was to scan the terrain ahead of a convoy for any improvised explosive devices or other danger. There was one noticeable spot along the route but it &#8220;didn&#8217;t look treacherous. It just looked muddy,&#8221; he said.

The first vehicle rolled over it fine. The second one blew up, killing five soldiers. On Grace&#8217;s screen, the vehicle was there and then it wasn&#8217;t.

He immediately started scanning the area for insurgents who might have remotely detonated the IED. Then he helped guide in the medevac, and as soon as the helicopter arrived, his shift was over.

The Air Force didn&#8217;t recognize the potential combat stress when the mission started. The pilot-centric service viewed combat stress as something that could be experienced only by a fighter or bomber pilot. Those flying drones at home in the States didn&#8217;t qualify and, as a result, &#8220;some of the senior leadership wasn&#8217;t giving them the support that they needed,&#8221; Singer said.

Now Creech offers counseling and has its own chaplain corps, and Gersten said he&#8217;s confident that the Air Force is taking steps to deal with new incarnations of combat stress, which he said haven&#8217;t reached alarming levels.

Most commanders think the fatigue stems from the tempo. The demand for drones is insatiable and the Air Force is struggling to keep up.

For those stationed at Creech, there seems to be an ever-receding finish line. The Air Force hits one target of production only to see it get bumped higher.

Air Force officials said they need to double the number of crews available to operate each drone, and are a year and half from being fully staffed.

The resulting shortage is keeping morale low, airmen said. Much of the grumbling comes from a sense that they are stuck at Creech forever, doing a mission they didn&#8217;t sign up for.

The majority of the pilots who fly drones were pulled from fighter jets, cargo planes and other aircraft.

Before drones became the dominant air request from ground commanders, the move was only temporary and pilots could expect to get back to their original aircraft after a short tour. That rarely happens these days.

&#8220;There&#8217;s really no faith left with Predator and Reaper drivers,&#8221; said Kent, who after leaving Creech the first time was abruptly pulled back for another year.

The crews rotate through day, swing and night shifts with few days off to keep the 24/7 mission going.

Singer said military experts consider that one of the challenges of remote warfare &#8212; not having cohesive units that deploy together, stay together and then come home together. Overall, Predator and Reaper crews tend to be &#8220;tired, disgruntled and disillusioned,&#8221; Kent said.

In 2006, a military study found Predator crews are at least as fatigued, if not more so, than pilots deployed downrange. Changes were made to the shifts, but a follow-up survey last year still showed &#8220;emotional exhaustion and burnout.&#8221;

The studies found many crew members are chronically fatigued, with about 40 percent reporting &#8220;a moderate to high likelihood of falling asleep in the [ground control station] while operating a weaponized, remotely piloted aircraft.&#8221;

Mathewson said conditions have improved, but sleep deprivation hasn&#8217;t stopped being an issue. Gersten said the fatigue is being &#8220;realized in vehicle accidents&#8221; on the drive home from base.