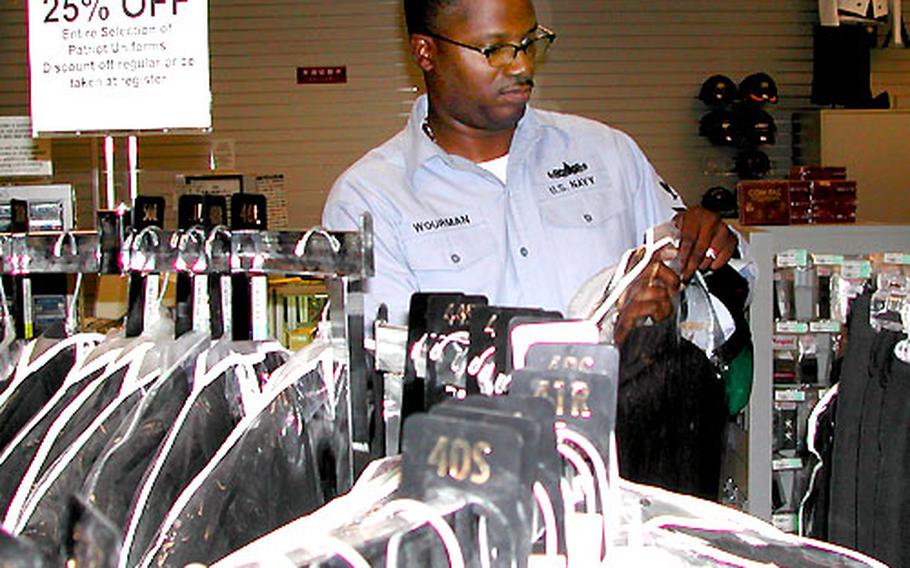 Petty Officer 1st Class Steven Long is weighed by Chief Petty Officer Will McClain at the Naples, Italy, base gym Wednesday. Long and about 30 other Naples-area first class petty officers were selected for advancement to chief petty officer and started their six-week transition period with the height, weight and body fat measurements. The transition will include a formal chief petty officer indoctrination course, almost daily physical fitness training sessions and refresher training on military drill. Long and the others will receive their chief’s anchors during a ceremony in mid-September. (Jason Chudy / S&S)

YOKOSUKA NAVAL BASE, Japan &#8212; The wait is finally over for first class petty officers here and around the Navy: The selection board has announced the results for promotion to E-7 &#8212; chief petty officer.

Sailors on ships and shore commands were given the news early Tuesday, ending a seven-month wait for thousands throughout the Navy.

Eligible for selection as chief this year: 18,965 sailors. Number of chief petty officer billets available, according to the U.S. Navy Bureau of Personnel: 4,323 &#8212; but filling all wasn&#8217;t a necessity. The Navy is expected to announce the total number of selectees Friday morning.

&#8220;I was shocked and ecstatic,&#8221; said the Arlington, Texas, native, referring to his reaction Tuesday upon hearing the announcement.

King has been in the Navy for 19 years, and this marked the third time he&#8217;d been eligible for selection as chief. Those selected must pass a chief&#8217;s exam, then be selected by a promotion board that includes master chief petty officers and commissioned officers.

&#8220;I am looking forward to initiation. This is just a stepping stone for me until I make master chief,&#8221; King said, half-jokingly.

Those responsible for the selectees&#8217; initiation were equally excited about Tuesday&#8217;s announcement.

&#8220;They take this process seriously by teaching the core competencies and challenging the selectees,&#8221; he said. &#8220;They have stuff they have to accomplish and figure out to prepare them for entering the mess, so that on Sept. 16, the day they will be pinned as chief petty officers, those anchors will have some meaning. Events in the world today call for chiefs to take the job of developing sailors seriously, and that&#8217;s what we plan to do.&#8221;

The selectees can expect a full plate of activities before Sept. 16, Knight said. &#8220;A very rigorous (physical training) program has been set up for them. It will be a jam-packed schedule, but it will get them ready for entering the mess.&#8221;

Among the Blue Ridge selectees anxious to join Knight&#8217;s CPO mess is Angel Tejada, a 16-year Navy veteran. The 35-year-old postal clerk from Puerto Rico said he was very surprised to hear his name announced.

According to the Defense Finance and Accounting Web site, Tejada is likely to see a jump in his basic pay of more than $400 a month due to the promotion. But for Tejada, it&#8217;s not about the money.