The Vipers return to briefings, paperwork 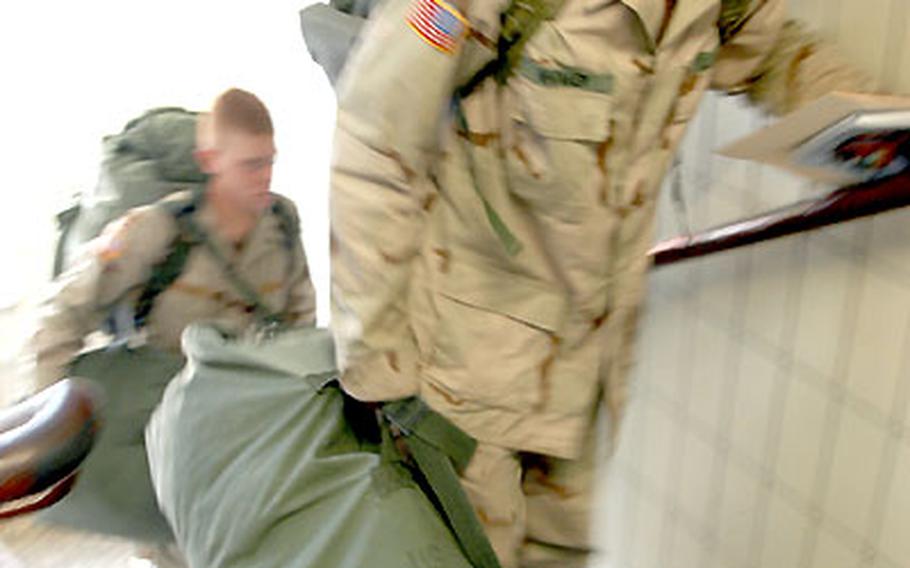 Pvt. Gabriel Whitaker, 21, of Patterson, N.J., climbs the stairs to his barracks room laden with gear from Iraq. Whitaker and comrades from Company B, 94th Engineer Battalion returned from Southwest Asia this past weekend to begin a week of mandatory half-days. (Rick Scavetta / S&S)

Pvt. Gabriel Whitaker, 21, of Patterson, N.J., climbs the stairs to his barracks room laden with gear from Iraq. Whitaker and comrades from Company B, 94th Engineer Battalion returned from Southwest Asia this past weekend to begin a week of mandatory half-days. (Rick Scavetta / S&S) 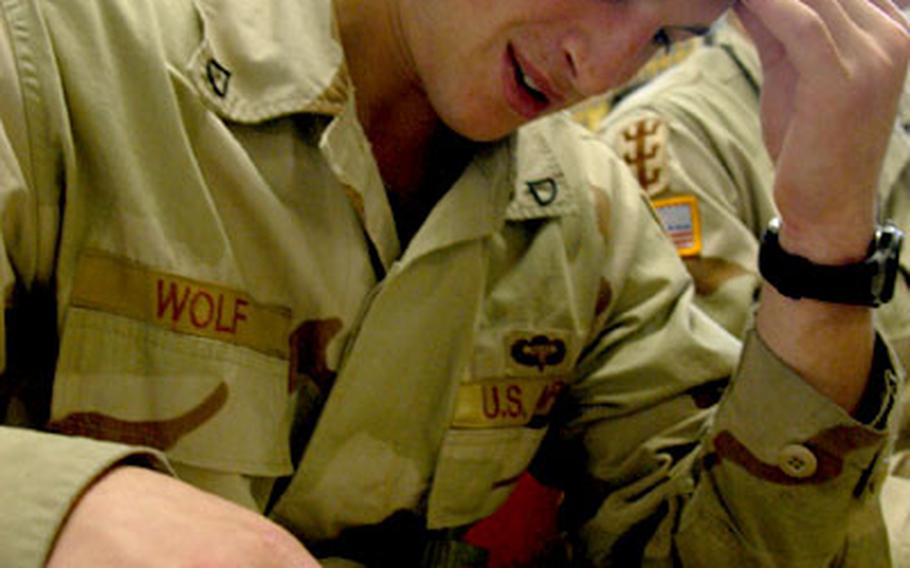 On the first day of U.S. Army Europe’s reintegration program, Pfc. Andrew Wolf, 20, of Etters, Pa., struggles to remember when he arrived in Iraq while filling out travel forms. (Rick Scavetta / S&S)

Editor&#8217;s note: Stars and Stripes reporter Rick Scavetta is embedded with the 94th Engineer Battalion, a Vilseck, Germany-based unit that has returned from Iraq following a yearlong deployment. This is the second in a series of articles on the soldiers&#8217; return to Germany.

The company, known as the Vipers, falls under the 94th Engineer Battalion, which returned this month from a yearlong tour in Southwest Asia.

About two dozen Company B troops, who remained in Kuwait to load vehicles onto ships, arrived at Rose Barracks this past weekend. Some Vipers are among the first U.S. troops to complete a full 365-day deployment.

During part of the initial half-day session, soldiers filled out travel vouchers in unison, one block at a time.

Experienced soldiers knew dates they left Germany, how long they stayed in Iraq, the dates of leave they took, and when they moved to Kuwait for the trip home. But younger troops, such Pfc. Andrew Wolf, of Etters, Pa., just shook their heads and put down their pens.

A buddy reminded Wolf that he left Vilseck in August. The 20-year-old carpenter joined the Army a year ago and met Company B in Baghdad. Since his return last weekend, he has spent much of his time drinking Icehouse beer and J&#228;germeister liqueur in the barracks. Before the partying continued that day, Wolf had to sort out his pay. Soldiers are compensated for travel expenses based on a per diem rate for certain countries.

Standing beside a hand-drawn sample of the Army form, Staff Sgt. Renee Orison reassured Wolf and his confused comrades.

Their first night in town began shortly after midnight when the soldiers&#8217; buses rolled through the gates of Rose Barracks.

Waiting for Coder was Spc. Robert Jones, aka &#8220;Punk Rock Bob,&#8221; a friend who returned from Iraq two weeks earlier. Spc. Craig Stasko and his wife, Sabina, also waited for Coder, who dropped his gear and changed into civilian clothes. Like many soldiers, he had no shoes to wear and hit the German streets wearing desert tan boots.

Coder, a lanky redhead who plays guitar, joined his friends for a beer at the Rose and Crown, a local hole-in-the-wall pub in Vilseck. Despite a selection of German beers, for his first brew in a year Coder chose a Budweiser and then lit a Marlboro. The party moved to Pegasus, another popular bar in town.

Coder&#8217;s friend, Spc. Anthony Cortese, is getting married soon and was having his bachelor party. Coder drank, laughed and shot pool. He and his friends closed the bar.

Meanwhile, gunfire from the nearby ranges at Grafenw&#246;hr reminded Coder of Baghdad.

He awoke to Bob&#8217;s kids, Miles, Logan and Ethan. He spent much of the morning playing with them.

Also, wearing civilian clothes and desert boots that first night, Utter ran to the 24-hour convenience store on base to pick up a midnight snack, chicken and vegetables instant noodle soup. The Wisconsin native also bought a six-pack of Miller Genuine Draft, but drinking was not on his mind.

Utter had begun a romance downrange with a female soldier, who also returned to Germany. When in Iraq they had little time to be close. Now in Vilseck, Utter longed to be with her.

That night he got his wish.

After a breakfast beer, Utter rushed back to his barracks to pick up his household goods. Unpacking his few things, Utter knew he had to go shopping. That day at the post exchange, he bought about $100 worth of clothes and $140 of essentials, a coffee pot, a trash can and an iron.

USAREUR&#8217;s reintegration program includes seven half-days designed to make sure troops complete a series of personal tasks while being monitored by their command.

The first day began slowly as a sergeant talked his way through a slide show, discussing the week of mandatory sessions. Troops signed their name to a roster to prove they attended.

While some troops completed a yearlong tour, others were replacements that met the unit in Iraq. In those cases, the soldiers saw little of Vilseck and knew just a few things about the post and their surroundings in Germany.

Now everyone had to begin adjusting to garrison life. Cars need to be registered and insured. German troops pull them over to inspect for bombs. Pond Security guards must sign in the soldiers&#8217; German girlfriends.

What most troops said they needed was free time to run errands, they said.

They&#8217;ve forgotten codes to their post office boxes. They need haircuts and new patches sewn onto uniforms. Most are planning vacations or trips to the States to visit relatives.

&#8220;The training is just a few hours each day, which should give ample time for personal business,&#8221; Orison said.