The verdict is in: Company C excelled in Iraq firefight 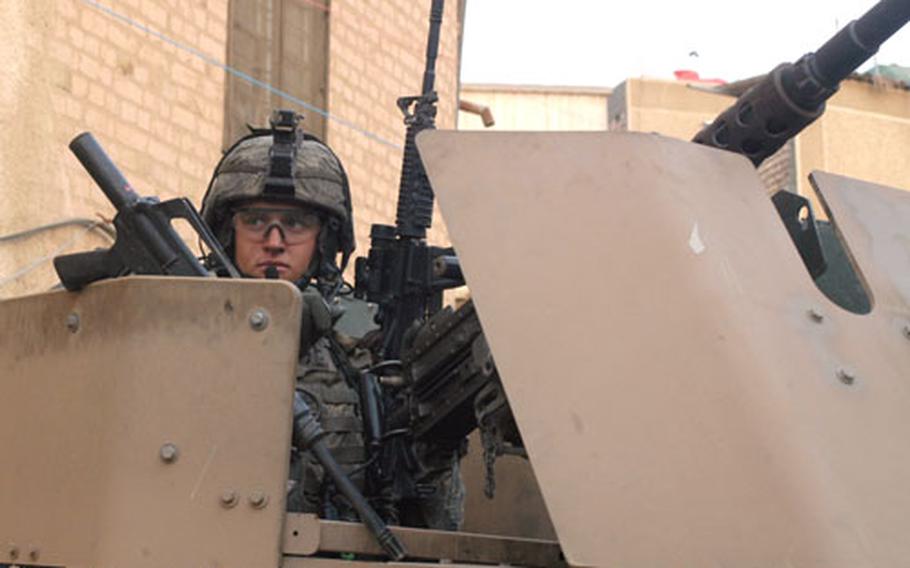 Pfc. Ross McGinnis from 1st Platoon, Company C, 1st Battalion, 26th Infantry Regiment, mans his weapons in the turret of a Humvee in the Adhamiyah neighborhood of Baghdad just days before the violence that followed the Saddam Hussein verdict Nov. 5. (Ben Murray / S&S)

Pfc. Ross McGinnis from 1st Platoon, Company C, 1st Battalion, 26th Infantry Regiment, mans his weapons in the turret of a Humvee in the Adhamiyah neighborhood of Baghdad just days before the violence that followed the Saddam Hussein verdict Nov. 5. (Ben Murray / S&S) 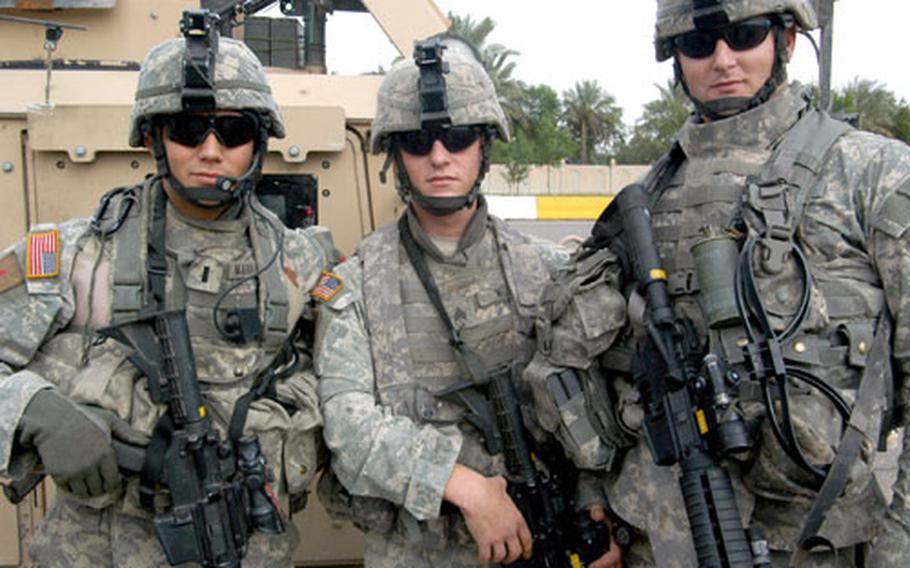 Soldiers from Company C, 1st Battalion, 26th Infantry Regiment based in Schweinfurt, Germany — left to right, 1st Lt. Ryan Marvilla, Sgt. Ryan Wood and Spc. Billy Fielder — are among those who took part in the major firefight on the day of the Saddam Hussein verdict earlier this month. (Ben Murray / S&S)

When Saddam Hussein was convicted and condemned to death Nov. 5 in Baghdad, the violence many feared would sweep through the city appeared never to materialize.

The media reported celebrations, demonstrations and a few isolated, deadly clashes between sectarian groups on a day most people heard was all but free of fighting.

Immediately after the verdict, the unit&#8217;s tiny, one-building headquarters at Patrol Base Apache came under fire, kicking off a two-hour engagement that would be one of the U.S. military&#8217;s most significant fights in the country that day.

By late afternoon, after an attack on the base and a rolling firefight against groups of men armed with machine guns, rocket-propelled grenades and hand grenades, members of the company had killed 38 insurgents without losing a single U.S. soldier.

&#8220;Pretty much as soon as we heard [the verdict] had happened, we started hearing gunfire,&#8221; one soldier recounted.

Around midday, while word of the death sentence was filtering through Baghdad, the tiny base on the banks of the Tigris received machine-gun fire from across the river, Company C commander Capt. Michael Baka said.

A direct attack on the base is rare, but the unit responded quickly with marksmen on the roof of the compound led by 1st Sgt. Kenneth Hendrix and fire from M2A2 Bradley fighting vehicles and Humvees stationed at Apache, Baka said. After a 10-minute fusillade, Baka said, the troops had killed five of the attackers and scattered the rest.

But that was just the beginning. Baka also found out mortar strikes had been reported in Adhamiyah, and things were heating up on the streets.

Company C&#8217;s 1st Platoon, led by 2nd Lt. Travis Atwood and accompanied by Baka, was already locked and loaded for a patrol through the city. They quickly rolled out to look for damage from the mortar rounds, but didn&#8217;t get far before the shooting started again.

Moving through an area called Antar Square, the convoy was fired upon by men with AK-47s, Baka said.

The men were armed and donning black masks, hoisting RPGs and other weapons. They scattered when they saw the Bradleys, Baka said, but it mattered little &#8212; after moving a little farther north, the soldiers encountered another large group and this time engaged them, killing several.

Minutes later, during a lull in the firing, one of the vehicles was hit by a roadside bomb, triggering a renewed hail of machine-gun and RPG fire from insurgents.

Soon, the Humvees broke off from the Bradleys to sweep through the narrow streets of the neighborhood, later joined by Company C&#8217;s 2nd Platoon, led by Sgt. 1st Class Tim Ybay, which also came under fire as it joined the fight.

&#8220;They were staging ambushes along the route,&#8221; said Sgt. Ryan Wood, a Bradley commander. Insurgents fired whatever they could, he said. There were &#8220;just insurgents running up and down the streets.&#8221;

With U.S. elements now roaming in several areas of Adhamiyah, the engagements kept piling up, Baka said, with insurgents throwing everything they had at the Americans. Humvee gunners such as Pfcs. Armando Cardenas and Joshua Almond took out insurgents with their .50-caliber and 7.62-mm machine guns, while others provided cover with M-4 rifles.

At one point, Baka had to order troops not to fire on several men as they ran into the mosque for cover, he said.

But much of the time, the insurgents had no chance; one man who fired an AK-47 at one of the fighting vehicles from a window immediately received a dose of the Bradley&#8217;s 25-mm high explosive rounds.

By about 2:30 p.m., after more than two hours of base defense and rolling gunbattles, the fighting was winding down. A conservative estimate on numbers of insurgents killed would later add up to 38, with another 10 wounded.

The fight went largely unnoticed, swallowed up in reports of general calm on Nov. 5.

But the men deserved credit, he said, for what he described as an exercise in professional soldiering, a show of both effective force and dutiful restraint.

For troops often targeted by roadside bombs and snipers, it was a rare chance to fight the enemy in the open and take advantage of superior firepower.