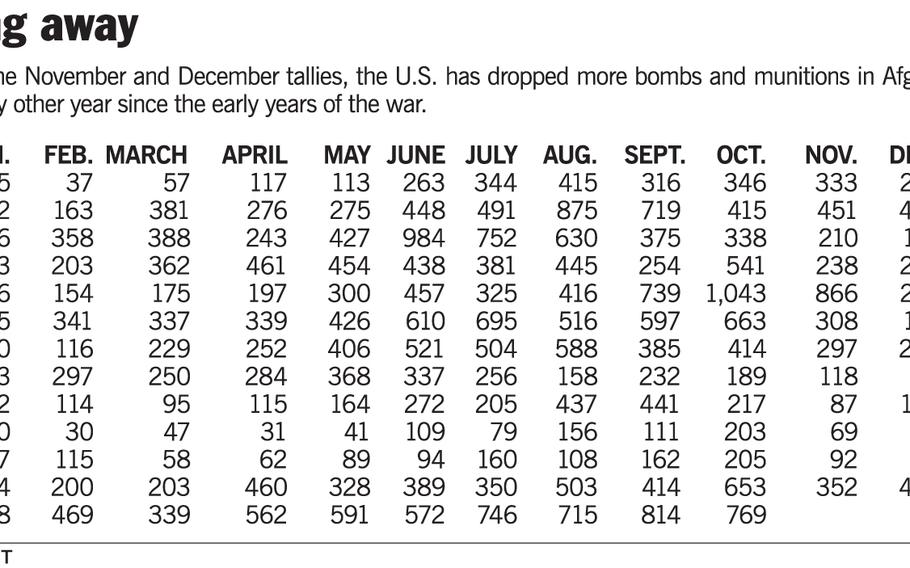 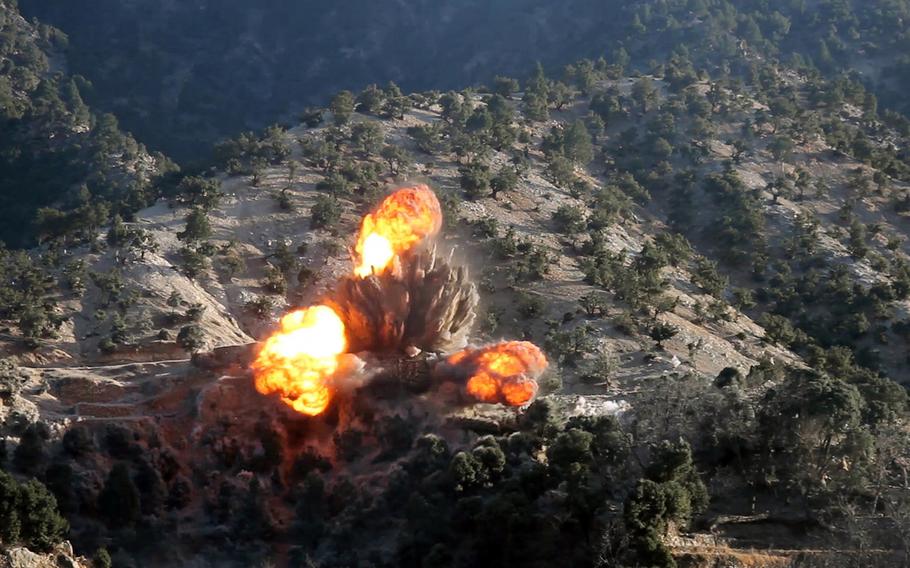 Two coalition airstrikes eliminated Islamic State fighters and facilities in the Nangarhar and Jowzjan provinces of Afghanistan, Feb. 6, 2018. The U.S. dropped more bombs and other munitions in Afghanistan during the first ten months 2018 than in any other full year since at least 2006, when documentation began. (Jacob Krone/U.S. Army) 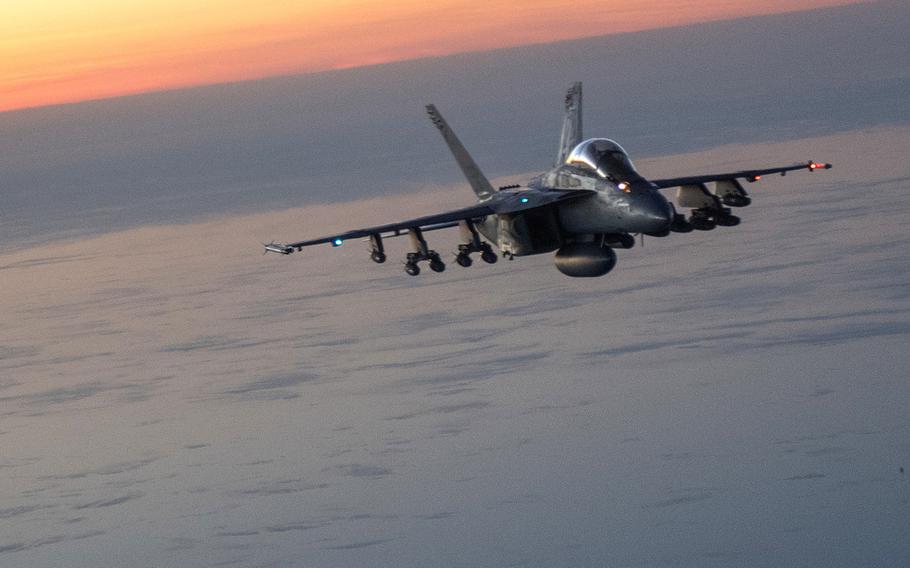 A U.S. Navy F/A-18E/F Super Hornet flies over Afghanistan in December 2017. The U.S. dropped more bombs and other munitions in Afghanistan during the first ten months 2018 than in any other full year since at least 2006, when documentation began. (Jeff Parkinson/U.S. Air Force) 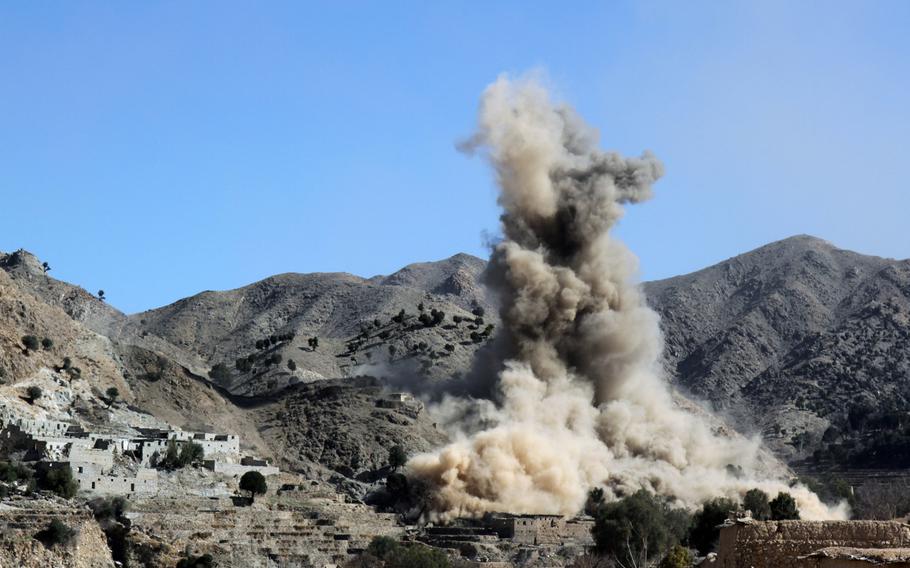 An airstrike supports Afghan commandos clearing out Islamic State fighters and fighting positions in Pekha Valley, Achin district, Nangarhar province, Afghanistan, Feb. 17, 2018. The U.S. dropped more bombs and other munitions in Afghanistan during the first ten months 2018 than in any other full year since at least 2006, when documentation began. ()

KABUL, Afghanistan — The United States dropped more bombs and other munitions in Afghanistan during the first ten months of 2018 than in any other full year since documentation began, new Air Force data shows.

Between the start of the year and the end of October, U.S. forces released 5,982 munitions in Afghanistan, said the latest monthly report by U.S. Air Forces Central Command. Coalition aircraft flew nearly 6,600 sorties, about 12 percent of which carried out strikes during that period.

The latest figures surpass the previous annual record of about 5,400 recorded in 2011 at the height of the U.S. troop surge. AFCENT’s figures include both bomb and missile strikes, 105mm shells fired by AC-130 gunships and strafing fire from 20mm cannons and up.

A ramped-up bombing campaign has been part of the Trump administration’s strategy for pushing the Taliban to the negotiating table. But the Kabul government has been unable to win territory back from the insurgents and the bombing has corresponded with a record number of civilian casualties caused by airstrikes, according to United Nations statistics.

On Wednesday, just a day before the latest Air Force data was released, the military said it was investigating claims that about two dozen civilians were killed by a U.S. strike in southern Helmand province.

In addition to targeting the Taliban and other militant fighters, munitions this year have been used for “terrain denial” strikes — bombings intended to destroy positions and routes used by insurgents — and to target Taliban drug labs, military officials said.

It’s difficult to know to what extent the bombings have prevented insurgents from controlling more areas than would otherwise have been the case. Despite the uptick in airstrikes, the Taliban hold more territory than at any time since the war began in 2001, according to U.S. military data.

“The challenge is that ultimately this is a ground war, so air power is only useful to the degree that it helps support ground forces,” said Seth Jones, a counterinsurgency expert at the Center for Strategic and International Studies.

Afghan ground forces have suffered heavy casualties in recent months. Since 2015, when local troops took over combat operations from the U.S. and NATO, nearly 30,000 Afghan soldiers and policemen have been killed, President Ashraf Ghani recently revealed.

U.S. and Afghan air power does appear to be confining insurgent control to rural areas and keeping it away from major population centers, a success touted by the international coalition.

“The airstrikes constrain the Taliban’s reach in the country, they know they’re not going to be able to take over the major cities, and, therefore, there’s a stalemate,” said Kamran Bokhari, a foreign policy expert at the University of Ottawa.

“I do think it’s a good strategy to increase U.S. airstrikes because there are no other good alternatives,” Bokhari said. “You don’t want the Taliban to feel as if they have the upper hand and then drive a hard bargain at the negotiating table.”

The U.S. and the Taliban have held direct talks this year aimed at promoting a negotiated peace settlement. While both sides say they would like to continue the dialogue process, the Taliban have shown no sign that they are serious about ending their insurgency, said Afghan Chief Executive Abdullah Abdullah, who holds a position roughly equivalent to prime minister.

Omar Samad, a senior fellow at the Atlantic Council and former Afghan ambassador to Canada and France, said he did not believe the bombing surge had pushed the Taliban into the preliminary talks.

Since 2011, the insurgents have participated in several rounds of talks with the government, the U.S. and international mediators.

“If you look at the trend for the past few years, it’s coincidence,” Samad said. “But it’s very much tied to the fact that the military is clear on pursuing the military option simultaneous to the political process.”

Airstrikes have caused more noncombatant deaths and injuries in the first nine months of the year than during any similar period since the U.N. began documenting them in 2009. Casualties included 313 dead and 336 wounded, a 39 percent increase from the same period last year, said a U.N. report in October.

The U.N. attributed just over half of the airstrike casualties to international forces — namely the U.S., which is the only foreign country officially conducting strikes — while Afghan forces were blamed for 38 percent. Another 11 percent were undetermined.

On Thursday, the mission said preliminary findings indicated that as many as 23 civilians, mostly women and children, were killed in an airstrike on Tuesday in Helmand province’s Garmsir district.

The U.S. needs to do everything it can to prevent its munitions from killing or injuring civilians, Samad said.

“One of the consequences of trigger-happy bombings over time has been to move part of the population towards the militants,” he said. “So, we need to be very mindful of the fact that we do not want communities to shift allegiance.”