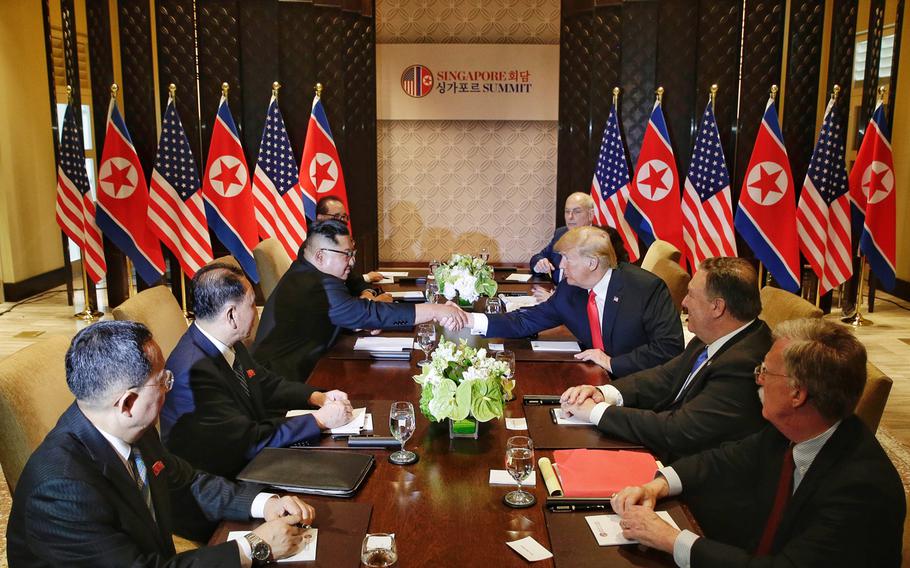 President Donald Trump and North Korean leader Kim Jong Un, along with diplomats from both the United States and North Korea, meet in Singapore on June 12, 2018. (Kevin Lim/The Straits Times)

Following the June 12 summit in Singapore, Trump stunned U.S. lawmakers, allies and Pentagon officials with plans to halt military exercises with U.S. ally South Korea and by Tuesday officially announced the cancellation of the exercises slated for August.

“The United States got a bad deal in Singapore,” Abraham Denmark, who was U.S. deputy assistant secretary of defense for East Asia under former President Barack Obama, told the House Foreign Affairs Committee subpanel on Asia and Pacific issues. “The most geopolitically significant outcome of the summit was to set the U.S.-[North Korean] relationship onto a diplomatic track. Additionally, the president suspended major …joint military exercises, this gave away a major piece of leverage while over time weakening the capabilities of our forces stationed in Korea for no appreciable gain.”

The United States and South Korea conduct two major sets of military exercises each year — Foal Eagle and Key Resolve in the spring and Ulchi Freedom Guardian, which was slated for August. They also hold smaller training exercises throughout the year.

“All of us who work on Asia were confused or disturbed by the president’s abrupt cancellation of U.S. joint military exercises,” said Michael J. Green, a former adviser to former President George W. Bush and who is now senior vice president at the Center for Strategic and International Studies, a Washington think tank.

However, a new poll from The Associated Press-NORC Center for Public Affairs Research released Thursday finds that 55 percent of Americans approve of Trump’s diplomacy with North Korea, up from 42 percent in March and 34 percent last October.

The survey was conducted immediately after Trump concluded a one-day meeting with Kim, the first between a U.S. and North Korean leader in six decades of hostility, at which they agreed North Korea would work toward denuclearization in exchange for U.S. security guarantees.

“This was not a unilateral decision, if you are Japan or Korea or Australia,” said Green, who is also director of Asian studies at Georgetown University’s School of Foreign Service. “This was a bilateral decision between North Korea and the United States proposed by China and Russia with no consultation with our closest allies, compounded by the president’s statements that someday he would like to get out of Korea altogether.”

The United States has about 28,500 servicemembers in South Korea as part of the longstanding alliance between the two countries that fought together in the Korean War, which lasted from 1950 to 1953.

Trump said he has no plans to decrease the number of U.S. troops in the South as part of security assurances for the North, but has left open the possibility to do so in the future.

Denmark, who left the Defense Department in 2017 and is now director of the Asia Program at the Woodrow Wilson International Center for Scholars, said he has yet to see any indication that Kim wants to pursue denuclearization or disarmament, and instead appears to be solely interested in engaging the world as a nuclear power. Kim wants to enter into arms control negotiations, Denmark suspects.

As a result, it will be difficult for negotiations to move forward with different objectives in mind by the United States and North Korea, Denmark warned.

“The question people are asking is whether this was a win-win or a Kim-win,” said Rep. Brad Sherman, D-Calif., ranking Democrat for the House subcommittee. “I think it’s clear this a Kim-win, but this is just the first inning. It is possible as this goes forward, it could be a win-win situation.”

Some lawmakers and experts said the North received a major concession – reversing decades of U.S. military posture in the region, with joint exercises at the heart of readiness efforts against the rogue regime – while the United States seemingly receiving nothing in return. The drills infuriate North Korea, which considers them a rehearsal for an invasion.

“The summit was heavy on pomp and circumstance, but light on substance,” said Bruce Klingner, senior research fellow at the Asian Studies Center for The Heritage Foundation, a conservative think tank. “There was nothing new in the Singapore communique… each of the four major components was in previous accords with North Korea and were stronger or more encompassing in the previous iterations.”

Several lawmakers have expressed alarm with plans to halt military exercises. The troops and joint exercises were not mentioned in the final summit document, which focused on security guarantees and a general commitment to denuclearization.

“While North Korea agreed to nothing new, the United States took the unprecedented step to indefinitely suspend our joint military exercises with our ally,” said Rep. Ted Yoho, R-Fla., chairman of the House Foreign Affairs Committee subpanel on Asia and Pacific issues. “There’s been widespread disappointment regardless of party and affiliation that the United States would make these concessions when North Korea‘s only track record is cheating and double-dealing.”

Stars and Stripes reporter Kim Gamel contributed to this report