‘The type of guy that runs to the sound of gunfire’ 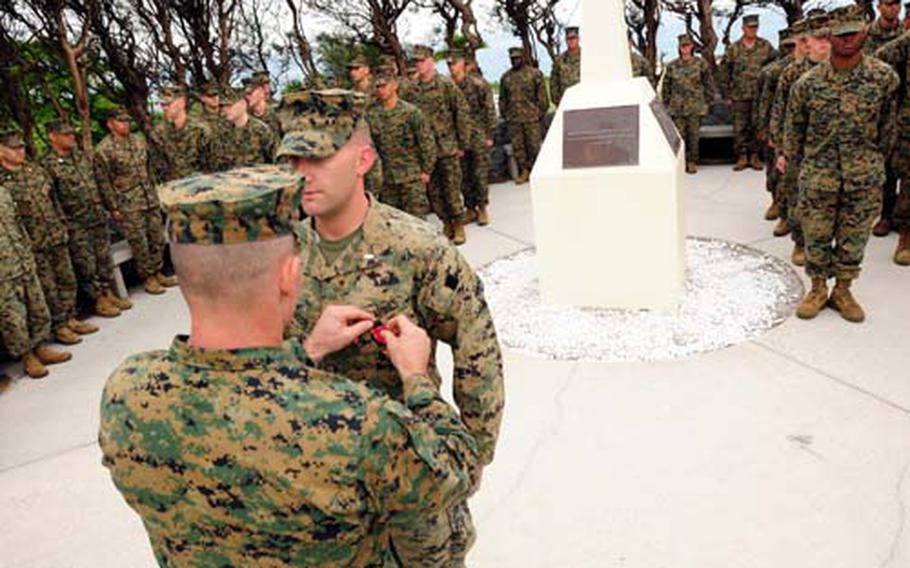 CAMP COURTNEY, Okinawa &#8212; It happened suddenly, if not unexpectedly.

The village of Mirdesh had not been patrolled by Afghan or coalition troops in 10 months, and it was a known safe haven for enemy fighters.

First Lt. Colin P. Boynton, two fellow Marines and the 30 Afghan soldiers they were embedded with knew this as they made their way last Christmas Eve by foot toward their command post after a meeting with Mirdesh elders.

They were on a trail along a river, about a mile from their post. Steep mountains flanked the trail. And when machine-gun fire erupted, Boynton and 13 others in the rear were separated from the pack.

Boynton &#8212; at the time a training team leader embedded with 1st Infantry Company, 2nd Kandak, 2nd Brigade, 201st Corps, Afghan National Army &#8212; had been in firefights before, but never while out on patrol.

"The enemy were very patient and waited till we were in a vulnerable location, where most of the patrol had turned a bend in the trail," Boynton said before receiving the Bronze Star Medal with "V" for valor during a ceremony Friday at Camp Courtney. "We were stuck in a kill zone."

Raked by gunfire, the troops took cover behind rocks and trees.

One Afghan soldier was hit immediately through the knee. Within two minutes, three others were wounded.

The enemy fire was coming from huts at the edge of the village about 250 yards away, Boynton said.

"I just had to get everyone out of there, including the casualties," he said.

He coordinated fire support with coalition helicopters overhead and the front of the patrol before helping get out the wounded Afgan soldiers. They would all survive the firefight.

The Afghan troops "provided outstanding fire support during the entire attack, allowing us to get out of the kill zone," Boynton said. At least one enemy fighter was killed.

Lt. Col. Ted Adams, Boynton&#8217;s commander in Afghanistan, presented the award Friday. He called Boynton "the type of guy that runs to the sound of gunfire."