The steps before deployment 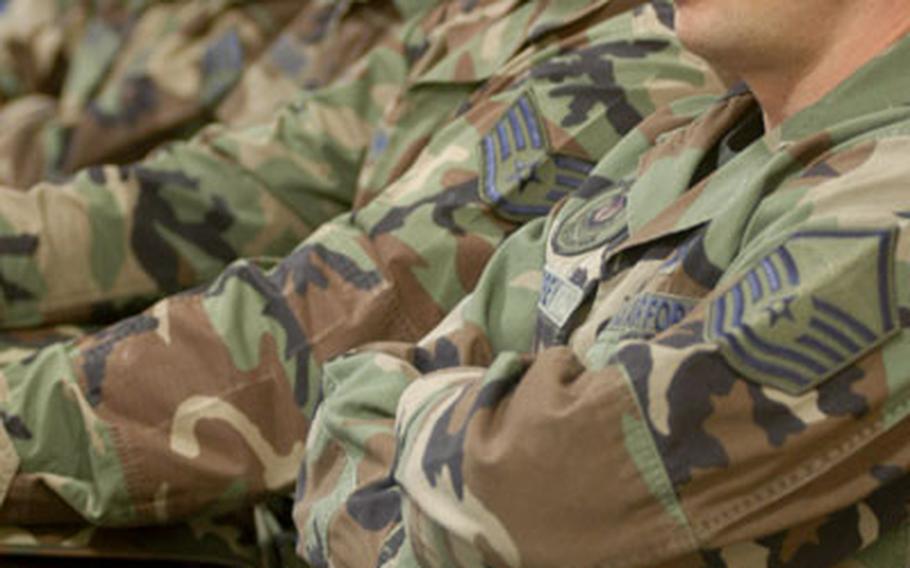 Master Sgt. Ralph Corey, right, from the 48th Equipment Maintenance Squadron at RAF Lakenheath, listens to a deployment briefing last Wednesday before heading out with the ongoing expeditionary rotation. About 800 airmen with the 48th Fighter Wing are deploying to Iraq, Afghanistan and surrounding nations. (Ben Murray / S&S)

Master Sgt. Ralph Corey, right, from the 48th Equipment Maintenance Squadron at RAF Lakenheath, listens to a deployment briefing last Wednesday before heading out with the ongoing expeditionary rotation. About 800 airmen with the 48th Fighter Wing are deploying to Iraq, Afghanistan and surrounding nations. (Ben Murray / S&S) 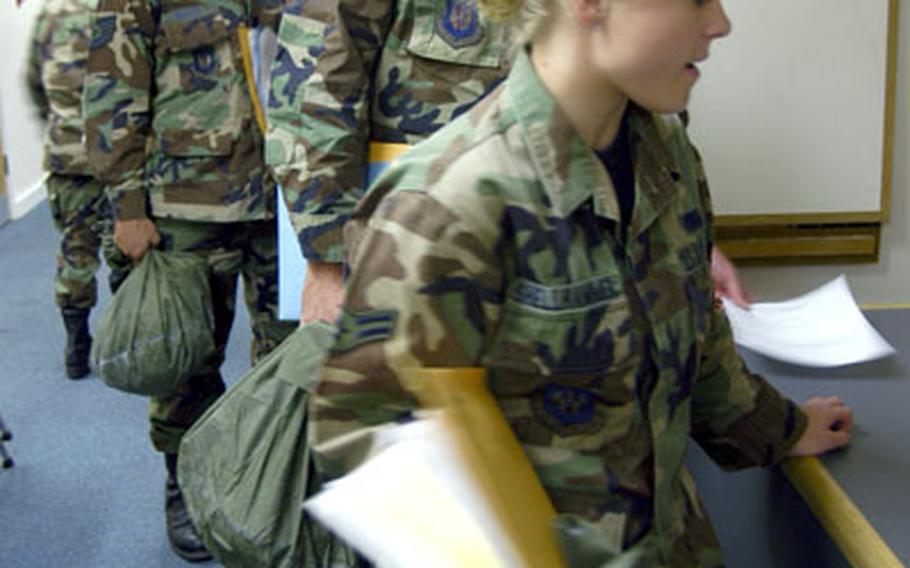 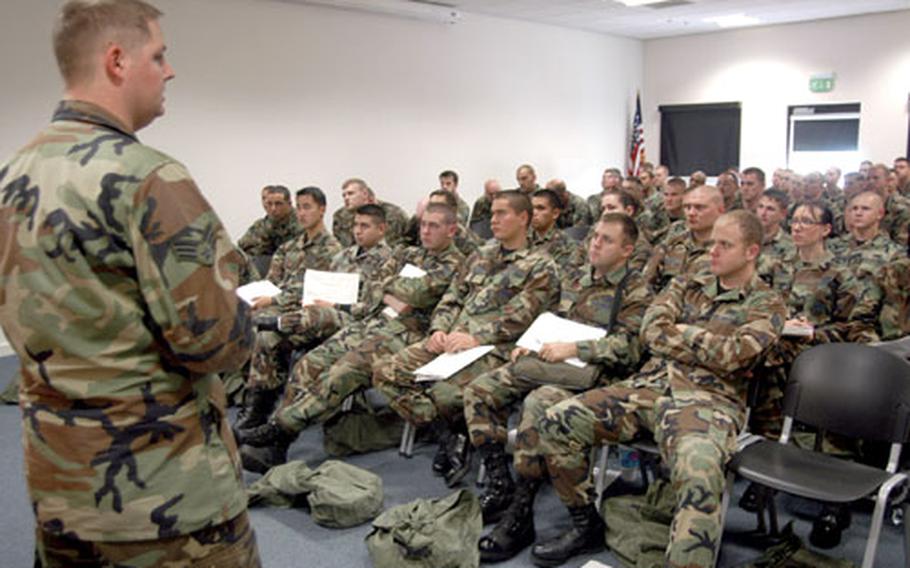 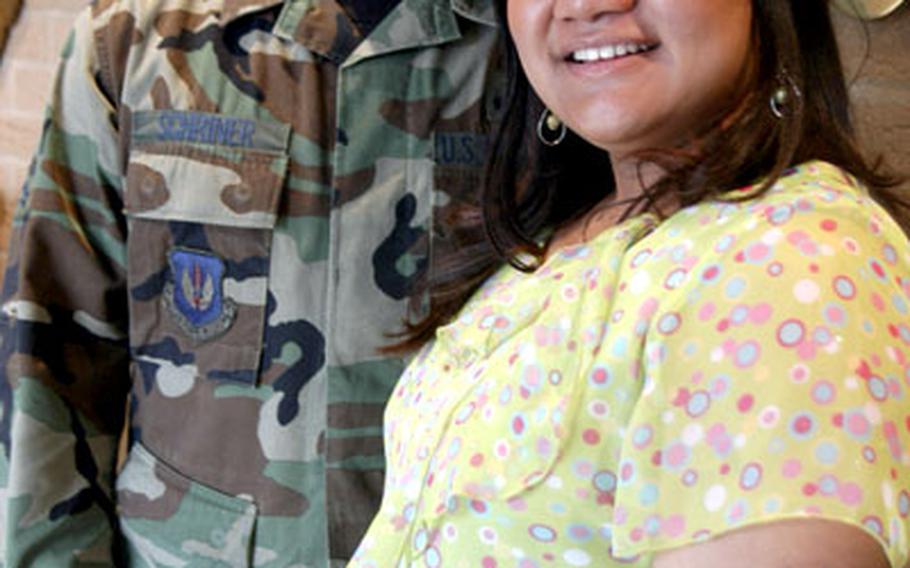 Senior Airman Travis Schriner and wife Aileen, who is pregnant with their first son, Brayden, due to be delivered just weeks after the airman deploys with his unit. (Ben Murray / S&S)

RAF LAKENHEATH &#8212; Like a lot of Air Force couples at RAF Lakenheath this fall, Senior Airman Travis Schriner from the 48th Equipment Maintenance Squadron and his wife, Aileen, have many details to sort out before he deploys for several months with elements of the 48th Fighter Wing.

There are bills to pay, powers of attorney to set up and work around the house to be done, with one room in the couple&#8217;s home getting particular attention lately: the new baby room.

In an empathy-inspiring set of circumstances, Aileen is due to have the couple&#8217;s first baby about three weeks after Travis deploys.

It&#8217;s a less-than-ideal situation for the Schriners, but it&#8217;s one of a long list of issues many families at Lakenheath are dealing with as hundreds of airmen head out for a deployment that will span the holiday season.

In all, about 800 airmen with the 48th Fighter Wing are deploying to Iraq, Afghanistan and surrounding nations to take part in an Air and Space Expeditionary Force rotation that has seen local forces leaving in small detachments for several weeks.

Of those, the largest portion is a group of about 360 pilots, maintainers and support crew of the 494th Fighter Squadron, which is sending some of its F-15E fighter jets to the Middle East.

Along with the rush on medical, dental, financial, legal and other offices around Lakenheath pushing to take care of airmen before they leave, the mission has meant a boom in business for the Airman and Family Readiness Center, charged with assisting the Lakenheath community through the process.

Tech. Sgt. Merlin Choice, Readiness noncommissioned officer, said the office has been busy helping airmen make sure they have all their prep work done &#8212; from updating passwords and personal identification numbers to writing wills and making sure families left behind know how to turn the heat on when winter sets in.

Things are a bit more complicated for the Schriners. Aside from setting up a new room for their baby boy, to be named Brayden, and stocking up on diapers and infant&#8217;s clothes, they&#8217;ve been trying to arrange for her mother to come from the Philippines to help her in the months after the birth, the expectant mother said.

The couple has had lots of support, they said, but the separation will still be hard. Brayden will be Aileen Schriner&#8217;s first child, and the prospect of going through labor and birth without her husband is frightening, she said.

Other families have similarly daunting obstacles: Single parents sending children back to the States, one woman due to have twins while her husband is gone, and double spouse deployments.

For Master Sgt. Floyd Kirkland from the 48th Contracting Squadron, who is deploying at the same time as his wife, Tech. Sgt. Renee Kirkland, the decision on what to do with their teenage daughter was straightforward &#8212; find a way for her to stay in England.

To keep her at Lakenheath High School, the Kirklands are bringing over his mother to stay for several months &#8212; a process that comes with myriad procedures of its own, he said. Along with sorting out extended base access and visa requirements, he also has to teach her to drive on the left, and help her get comfortable in England, Kirkland said.