The Spirit of Panmunjom is frosty 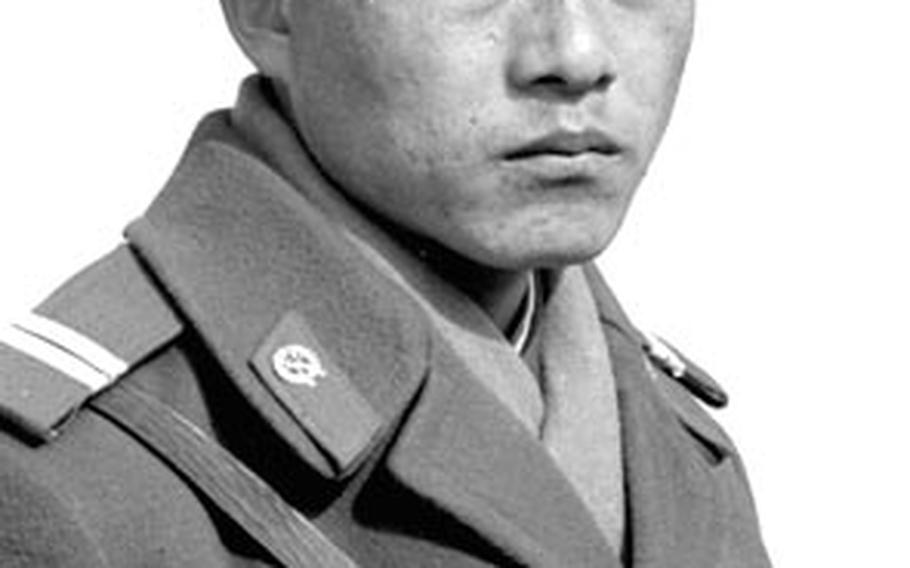 Buy Photo
A North Korean soldier on guard duty during the 417th meeting of the Military Armistice Commission glares across the border in February, 1983. (Harold China/Stars and Stripes)

It is face-off time at Panmunjom.

"Everything good?" asks the captain, just on the south side of the military demarcation line.

"That's a trip," mutters the soldier.

And here come the North Koreans wearing their red armbands and overcoats and furry, red-starred hats, their arms swinging high and boots banging the pavement, looking about as tough as they can get their faces screwed up to look.

They stomp on up to guard their side of the line that splits the center of the demilitarized zone outside the little blue building where the 417th meeting of the Military Armistice Commission is commencing.

That goosestepping may be the most pompously ugly step ever devised by man or goose seems not to overly concern the young men of the People's Army.

What obviously concerns them are those other young men. Just a few yards &mdash; and a whole world &mdash; away across the thin concrete strip that is "the" line, are the Americans and their fellow United Nations Command policers of their side of the joint security area.

Inside the conference room, opening statements are being read with frosty formality.

Outside, the wind chill factor is minus eight.

But the negative eye contact going on between the young men of the free world, and the young men from perhaps the most closed society on earth, seems a lot lower than that.

No one would think of blinking. No one permits a shiver.

One of their young men, not even born when great battles were thundering through the hills north and south of here, turns his mouth so fiercely downward his lips whiten under cheekbones like brown rocks and hard little spider eyes that look colder than the icicles hanging from the roof of the little blue building.

One of our young men, meanwhile, grits his teeth.

Their young men stand with feet close together, arms rather rigidly down at their sides.

Our young men favor the wide-footed stance, arms a bit out, as though ready for anything, just anything their young men might take it in their heads to do. Some of their young men have done several things, including the 1976 ax murdering of our young men in the DMZ, since this armistice talking started 30 years ago.

Their young men may think they are so tough because they have been taught that they won the Korean War by throwing the imperialist invaders off their soil, say veteran observers of these meetings.

Indeed, the North's revised history books fail to mention that North Korea invaded and got thrown out of South Korea first. These and other historical oversights tend to muddy the waters of communication between the old enemies, observers note.

Inside the narrow conference room older men, separated by a green felt-covered table running the width of the room wall to wall &mdash; the line they don't cross &mdash; are trying to straighten out not only history but the future as well.

Each year as the well-advertised-in-advance Team Spirit military exercises begin in South Korea, a drumbeat of preparing for war occurs in the North. Troops are alerted. Rallies are held urging the people to fulfill their quotas and gird themselves to defend the fatherland from the imperialist hordes.

Observers say the play is acted out to the final curtain each year and, as the American contingent of Team Spirit troops depart on schedule, Communist spokesmen trumpet to the people that the would-be invaders have been cowed by the iron might and will of the great leader, Kim Il Sung, and his heroic people, and once again been forced to tuck their tails between their legs and slink away.

Already Team Spirit '83, still in the deployment stage, has been labeled "provocative," "perverted," a "heinous maneuver" and a "cover-up for war."

But the purpose of this 417th meeting, it is explained to the Communists by Rear Adm. James G. Storms, III, senior member of the UN Command delegation, is to gain agreement for each side to notify the other in advance when large scale military maneuvers like Team Spirit are to be held, in order to help reduce tensions and prevent miscalculations by the opposing armies.

Virtually everybody &mdash; including members of the frozen press. standing outside peering in through the 11 windows on each side of the building, some of them open &mdash; expects the Communists to respond with a propaganda barrage, and everybody is right.

In so many words the Communist side, led by Major Gen. Han Ju-Kyung, tells the UN side to take their Team Spirit and their troops and vacate Korea now.

"The simple answer to that," replies Admiral Storms patiently, "is no."

After two hours of this, Gen. Han's shaky left hand begins to shake so noticeably that he has trouble finding his mouth with a cigarette.

The fact is, none of the Communist old men look all that well. The representative of the Chinese People's Volunteers, for one, seems asleep with his eyes open, and is nudged by a comrade. From then on he searches the ceiling with his eyes, peers back at the frozen press and twiddles his thumbs.

In the strained history of these meetings, there have been less subtle, occurrences. Though the UN side has tried to play it straight, observers say it has not been easy.

Besides the battle of the eyeballs, there was once the battle of the flags, which finally ended when the North Koreans tried to engulf the room with what looked like a 30-foot one; the battle of the bladders, when which side could outlast the other, without calling for recess, became the pressing issue of the day.

Outside, the North Korean guard has changed again. Spider Eyes has been replaced by someone whose face is less made of stone. Indeed, this fellow seems scarcely able to keep from smiling no matter what he is looking at.

Rather than smile directly at the Americans,, however, he forces himself to look down and smile at his feet, or up at the clouds, or he grins at the icicles, or other inanimate objects. Someone times him, and rarely does two minutes elapse before his iron discipline flakes away, and there he is again, smiling at space.

But when a photographer tries to snap his picture smiling, he does an instant about face and smiles the other way.

Now, the 417th meeting of the longest military armistice in the world is ending. Inside and outside it has been two hours and 28 minutes of earnest effort, disagreement, incomprehension, stares, scowls, yawns, psych games, posturings, propaganda, and one poor deviationist goosestepper who can't order his mouth to stop committing unfierce acts like smiling.