'The smartest guy in Company B' 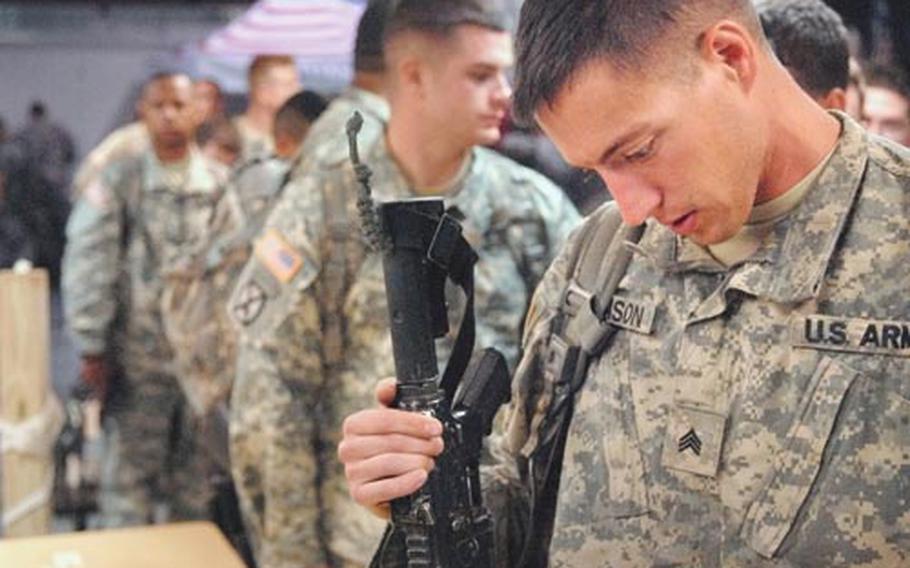 The smartest guy in Company B? He&rsquo;s not even a staff sergeant.

Sgt. David Johnson of Rutgers School of Law in Camden, N.J., who started college at 16 and passed the Washington state bar shortly before enlisting, was universally acknowledged as the brains of Bravo.

Johnson, according to most people in his unit, was the man most responsible for whatever good Company B did in its corner of Kirkuk province.

In some ways, he was just another soldier in the Army&rsquo;s five-year-plus effort to stabilize Iraq. He suffered like the others, laughed hard at their sophomoric, obscene and often hilarious jokes, did as he was ordered.

But in other ways, he was far from the average Joe.

His perceptions were more acute, his judgments more critical. And his future, free from the military, couldn&rsquo;t arrive soon enough.

Johnson went everywhere with the company commander &mdash; did all the "chai ops," the meetings, the tea drinking. He wrote the reports to higher headquarters. He kept the records, he took the phone calls, he devised the reconciliation plan with the area&rsquo;s Sunni extremists, he handled the multimillion-dollar payouts.

He did all that despite opposing the Iraq war, from its start, through his enlistment, while he was there twice, and now as he prepares to get out. He did it even though the Army stop-lossed him for more than a year &mdash; through a second Iraq deployment &mdash; and prevented him from returning home to a secure, lucrative life.

"It was difficult for me to go through life, every day saying, &lsquo;The country is at war. There&rsquo;s a bunch of 18-year-olds serving and dying, while I&rsquo;m here living it up in Spokane,&rsquo; " Johnson said. "At a time of war, it&rsquo;s important to serve, regardless of your political beliefs."

And there was also a personal sort of quest.

"I wanted to be on the line," he said. "I wanted a soldier experience."

His first deployment was to Baghdad; he&rsquo;d served and he thought he was done. Instead, Johnson was notified that the only place he was going was back to Iraq. A month later, he deployed with the Triple Deuce.

He wasn&rsquo;t happy. He did some legal research.

"The way the recent case law reads," he said, "the Army can do whatever it wants."

More than 10,000 soldiers are now being kept in the Army on stop loss, what&rsquo;s been called a backdoor draft. That&rsquo;s almost 10 percent of soldiers deployed to Iraq, Johnson noted.

He&rsquo;s never heard of anyone being stop-lossed twice.

He&rsquo;ll join the family business, a commercial roofing company in Spokane, Wash., started by his father and in recent years a very prosperous venture. His twin brother, Jack, cleared a half-million dollars there last year, Johnson said, while he toiled in the Iraq heat, dust, roadside bombs and one suicide truck bombing for $2,600 a month.

"It&rsquo;s cost me a lot financially," he said. "But who&rsquo;s to say? Money&rsquo;s not the biggest thing in the world."

Johnson was also known in the unit as being the only soldier offered the hand in marriage of a top insurgent&rsquo;s daughter.

It happened this way: After initiating the reconciliation process to persuade Sunni insurgents to stop attacking American soldiers, Johnson reached out to the No. 4 crime boss in the region, a man named Salim Khalil Awad.

"He was on the run, constantly on the run," Johnson said, "and it was likely he was going to die. We were going to catch him."

Johnson put out the word that if Awad came in to talk &mdash; about stopping his terrorist activities in return for life, stability and a paycheck from the Americans &mdash; he wouldn&rsquo;t be arrested.

"We don&rsquo;t arrest him," Johnson said. "The next thing we know, we have 20 more begging to come in."

Before long, he said, roadside bombs were down 80 percent. And Awad had offered Johnson his daughter.

"Who knows if he was serious," Johnson said.

Johnson declined. He is single; the soldier experience did in his two-year relationship with a nurse.

"When I got back I saw her once and that was it," he said. "We had just grown apart."

Johnson has always backed the war in Afghanistan and had hoped to be deployed there. "But you don&rsquo;t get to choose," he said.

The smartest man in Company B believes that the amount of good Americans have done in Iraq, despite all the billions of dollars spent and the thousands of American lives given, is modest, at best.

"With the reduction in IEDs, we may have saved some lives," he said. "But I don&rsquo;t think the Americans did a service. Five million displaced refugees, 100,000 dead Iraqis, a million injured. &hellip; In the end, I think we will have done a disservice to our national security."

The war has changed him, he said.

"Coming to grips with your own mortality, you think, &lsquo;I could be dead tomorrow.&rsquo; You think a lot about the suicide bombing and how the hell someone could do that."

"I know Salim cut people&rsquo;s heads off. I was having conversations with him and eating with him," Johnson said.

He said he&rsquo;s learned that "people are always going to be loyal to themselves first and their families. They&rsquo;re not going to switch over."

After he gets home and gets settled in as general counsel with the family roofing company, Johnson said, he also hopes to start a small law practice.

And with the soldier experience under his belt, the smartest man in Company B plans to become a war protester.

"War is not close to what it&rsquo;s cracked up to be in movies, at all," he said. "All we were there were the victims of crime."

Yet he wouldn&rsquo;t trade his experiences there.

"The friendships I&rsquo;ve made &mdash; you can&rsquo;t beat that. There aren&rsquo;t many lawyers with a Bronze Star," he said.