The sacrifice at home: Military spouses bear economic burden in service to their country 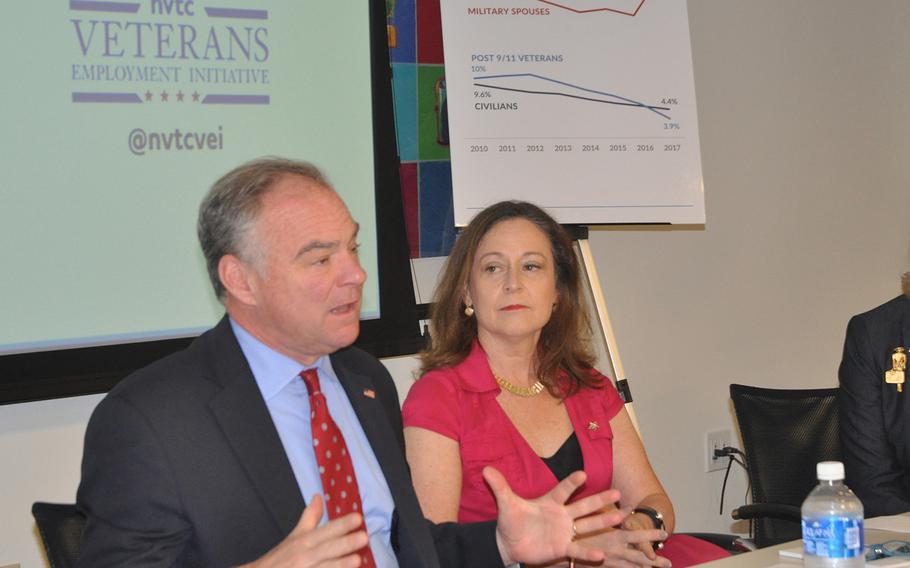 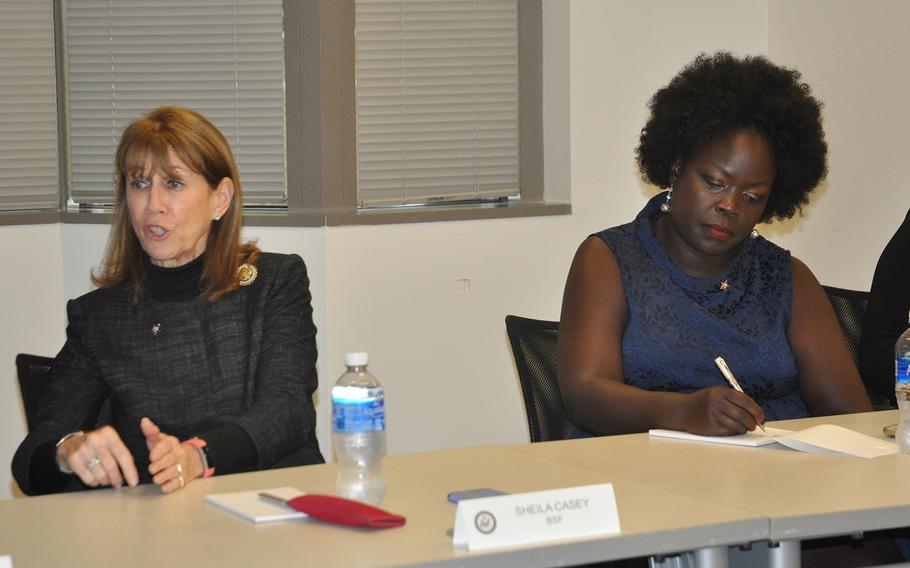 Buy Photo
Sheila Casey, COO of the publication The Hill and chair of the board at Blue Star Families, speaks during a summit on military spouse unempoloyment on Oct. 23 in Arlington, VA. To her right, military spouse and caregiver Patricia Ochan, a lawyer with a masters in cyber security, takes notes. (Dianna Cahn/Stars and Stripes) 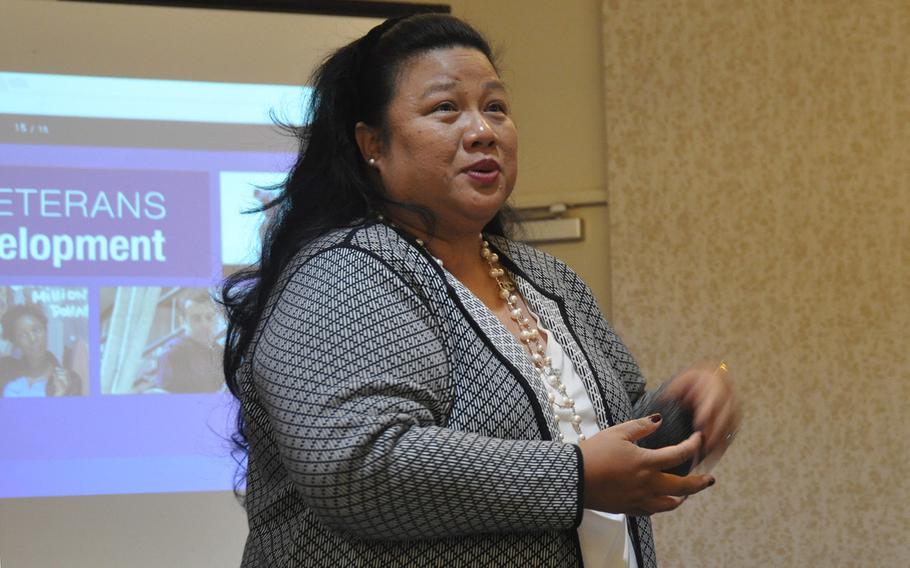 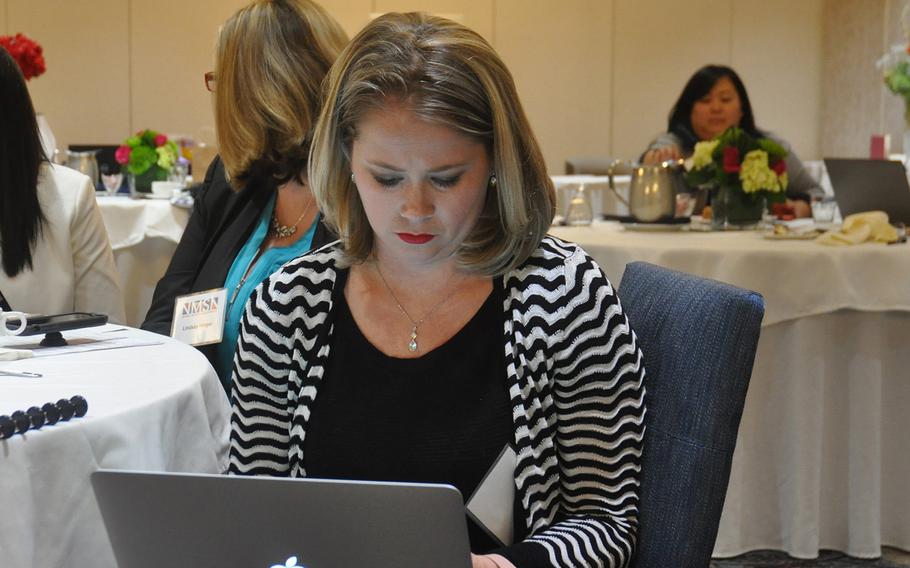 Buy Photo
Cyndi Meadows, a graphic artist and virtual assistant who is married to a Navy Explosive Ordnance Disposal technician, takes notes during a business development conference for military spouses on Oct. 13 in Springfield, VA. (Dianna Cahn/Stars and Stripes) 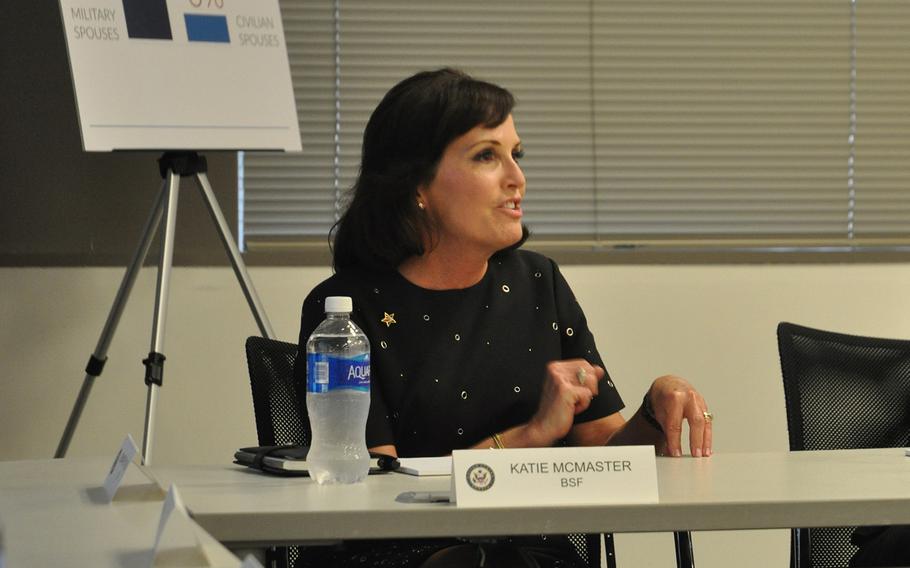 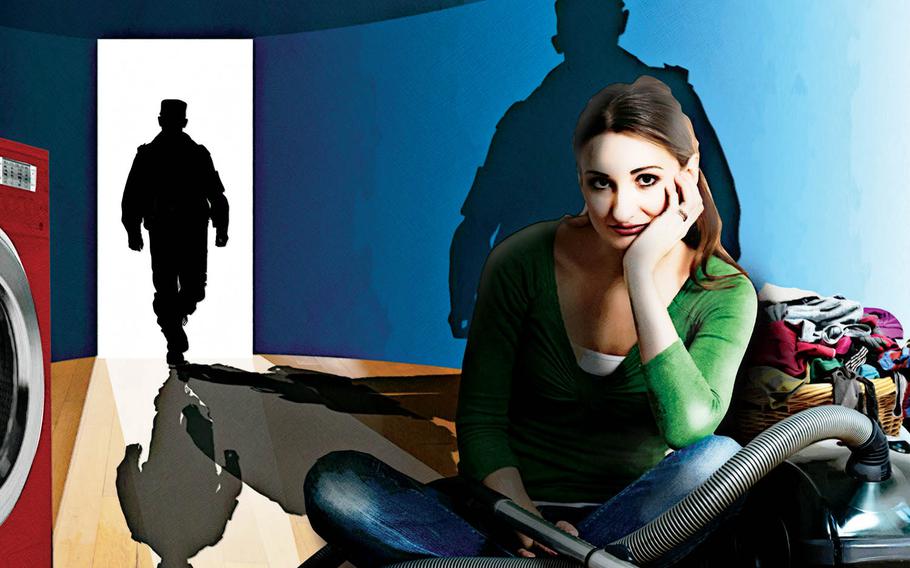 ARLINGTON, Va. — After her husband was medically retired from the Marine Corps in 2015, Patricia Ochan set aside her career as a lawyer with a cybersecurity degree to become a full-time caregiver to her husband while raising their young child.

She arranged for treatment for his physical and mental injuries and handled his doctors and his care at three hospitals as he transitioned from active duty to veteran. And, as healing began to take hold, she persuaded him to bite the bullet and go back to school.

It became a rewarding journey for both of them, watching him succeed and start sharing his war stories. “Those are the joys of my life,” she said.

But when she tried to return to the workforce part time, Patricia Ochan hit a wall. She said she would have great interviews but potential employers wouldn’t call back. Or she was told she was overqualified or they didn’t want someone to work part time.

Her biggest challenge was explaining the gaps in her resume.

“They look at your resume and see ‘caregiver’ and they assume you will be consumed outside,” Ochan, who is enrolled in a doctorate program for homeland security, said during a summit on military spouse employment. She has yet to convince a prospective employer that she can work from 7 a.m. to 1 p.m., get home to care for her husband and child, and be fully present in each role. “It’s really very frustrating,” she said.

Military families are far more likely to be struggling on a single income than other American families, with 43 percent of military spouses unemployed, compared with 25.5 percent of civilian spouses, according to a 2016 survey by the nonprofit Blue Star Families.

These trends are “having a crippling effect on military families — not just the spouses but the families as a whole,” said Blue Star Families CEO Kathy Roth-Douquet. Douquet, along with Sen. Tim Kaine, D-Va., led the Oct. 23 summit that brought together military family experts, nonprofits, spouses and business leaders to examine the issue.

The biggest challenge for military families is their frequent moves — many go every two years — making it difficult for spouses to build careers. They need portable work or flexible jobs they can do remotely. In addition, there are frequent deployments or time apart that sometimes demands gaps in employment. For many spouses, those challenges lead them to give up seeking employment, the survey found.

The Blue Star Families survey found that while 51 percent of unemployed spouses said they would like to work, that number jumped to 64 percent after learning child care was available and 79 percent when they were told the job in their field would be flexible — in other words, it would fit into their military lifestyle.

Katy Mills left her own military career as a transportation officer after she and her husband, also on active duty, spent four of their first five years of marriage apart. She became a yoga instructor but she found that moving so frequently made it difficult to sustain that work, she said. Each new place meant building new clientele. The high cost of child care creates an added, and sometimes insurmountable, obstacle.

Long-term military spouses tend to be highly educated and skilled, the survey found, and they’ve learned from their unique journeys. But they often don’t see a way to translate their skills for prospective employers.

Ochan described her work as a caregiver as similar to being a project manager — navigating her husband’s complex medical care in the military, at Walter Reed National Military Medical Center and the Department of Veterans Affairs, while being a mother, a wife, a student and a job-seeker.

Kaine, after listening to her story, agreed.

“Juggling what you juggle, that is a job skill,” he told her. “I don’t know how you put that on a resume, but if you think what it takes to be successful in the workplace, being able to juggle these multiple things you’ve done … that’s going to be a skill set that will be helpful in the workforce.”

Under the radar A decade into the post-9/11 wars, data began emerging about servicemembers coming home unable to find work. Veterans’ organizations took notice and got to work educating employers and troops about translating their skills to the civilian workforce.

The veteran unemployment rate has dropped below the civilian rate, according to Blue Star Families. Kaine, who spent much of his time on the Senate Armed Services Committee working on that issue, wants to turn the lens to the spouses.

They’ve been along on this journey that is now more than halfway through a second decade at war, but still remain under the radar. They are also often unaware of just how much burden they carry, Roth-Douquet said.

“Military spouses, being humble people who are service-oriented, experience each of these problems as, ‘This is my problem, there is something wrong with me that I am not able to solve this. And it’s my failing that I am not having my career and I am not supporting my family the way I want to and I am not having the future I want to,’ ” she said. “But it’s not. It is not because of you.”

Sue Hoppin, founder and president of the National Military Spouse Network, said spouses don’t realize that they don’t have to “wait their turn.”

“Statistics aside, it’s a lot of psychology — of feeling they are worth it,” she said at a business development conference she ran in Springfield, Va., earlier this month. “It’s OK to want something.”

Hoppin began working with military spouses seven years ago after recognizing that the traditional business boundaries that kept them out of the workplace were changing. Millennials often change jobs every few years, and with the advances in technology, telecommuting and portable jobs are becoming more common.

In addition, she realized that spouses who managed to translate their skills and experiences into jobs and businesses created a built-in network for the others. As she began matching spouses to opportunities, that sense of community grew, she said.

“We attract all kinds of women — people who come year after year, people who found a tribe,” she said.

They realize they are “here to talk about my business goals, not about deployments. Nobody had ever made them the center of a professional development conference geared toward spouses.”

Cyndi Meadows, a graphic artist whose husband is a Navy explosive ordnance disposal tech, said she never thought to turn her skills into a virtual assistant and social media business until she met Hoppin. Now, she has a portable and profitable business that she’s moved four times.

The first step, she said, was recognizing that she could be a supportive military wife and run a business.

“I think it takes a lot, especially for a military spouse, to recognize that their career is as important as their husband’s — even if it is not as big,” she said.

An issue of readiness This problem is having an impact on more than individual families, experts say. It is affecting servicemembers and that, in turn, affects their missions, said Lt. Gen. Gwen Bingham, assistant chief of staff of installation management in the Army.

It’s also a retention issue, said Katie McMaster, whose husband of more than 30 years is National Security Adviser H.R. McMaster. She’s moved more than 20 times, she said. Spouses will not wait forever to start careers, and if they can’t work while their partners are in the service, there will be pressure for them to get out.

“You keep a spouse happy, you’ll keep a soldier happy,” she said.

Hoppin agrees. “Decisions to stay in and get out are made around the kitchen table,” she said. “If a spouse can make more money and not have deployments and moves, that’s tough to compete with.”

Sheila Casey, chief operating officer at The Hill website and chairwoman of the board at Blue Star Families, told the summit she was “one of the lucky ones” who maintained a career despite 25 moves.

“If I had given up my career at some point and waited until (he) retired, it would have been impossible for me to begin today and have the career I am having,” she said.

Solutions Translating spouses’ skills and lifestyle into sustainable careers will require changes. But some major technology and defense companies are recognizing the value.

Representatives from technology, defense and management giants such as Sprint, Samsung, CACI, Northrop Grumman, Booz Allen Hamilton and others who attended the Kaine and Blue Star Families summit described ways in which they made their companies veteran- and military-friendly. Many said hiring spouses was a new area for them — and could open opportunities for technology companies facing a shortage of good workers.

“We are all fighting tooth and nail for the same talent,” said Jerry Calhoun, of Vencore, an information solutions, engineering and analytics company. “This is a new pool for us.”

Eddy Mentzer, associate director for family readiness and well-being in the Department of Defense, said he runs a spouse educational career program, but he’s the spouse of an Air Force colonel transitioning to senior command next year. They likely will be moving again, he said. So, even as he runs the program encouraging flexible work opportunities for spouses, he expects to be looking for a job again next year.

Mentzer said some companies were sharing good employees with rivals in the industry when they move. One military spouse, a Verizon recruiter, could not get a job with her company where she was moving in Mexico, so Verizon got her a job with AT&T, he said.

“If we can get Verizon talking to AT&T — no matter what phone they are on — we are making headway,” he said. “And that’s where the opportunities lie.”

Roth-Douquet said there are 25,000 to 35,000 unemployed military spouses in Virginia alone. “They are excellent workers and (there are) companies with need, but they are not the right shape to fit in the holes you’ve got,” she said.

“We need to do some creative work. It’s really super solvable. It can be done.”