'The Rock' is ready if needed in Fallujah 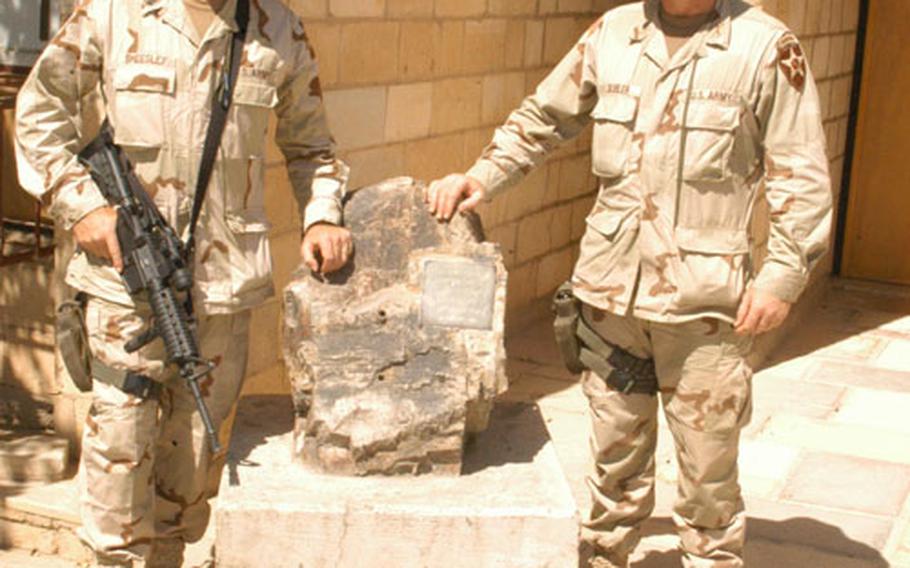 The unit, which arrived at Camp Habbaniyah two weeks ago, is already operating on the outskirts of Fallujah. Its area of operations includes territory southwest of the city. It splits responsibility for Fallujah with Marines from the 1st Marine Expeditionary Force stationed to the east, Gubler said.

Earlier this month the U.S. land forces commander, Army Lt. Gen. Thomas F. Metz, said assaults on Fallujah, Ramadi and Baghdad&#8217;s Sadr City suburb were likely in the next four months as the Iraqi election in January draws near. Last week, 1-503 was part of an assault on Ramadi that met only limited resistance.

The unit has conducted several patrols on the outskirts of Fallujah, including a Sept. 8 mission that resulted in the death of Pfc. Jason Lee Sparks, 19, of Monroeville, Ohio, during a firefight with insurgents.

&#8220;It [Fallujah] is considered one of the most dangerous parts of Iraq. There is no doubt that operations concerning Fallujah will probably involve us,&#8221; Gubler said.

The mission in the 1-503&#8217;s area of operations is to allow Iraq&#8217;s provisional government to establish government utilities and services, &#8220;and then, come January, the Iraqi people to decide in their elections who they would like to lead their nation,&#8221; Gubler said.

That will involve defeating anti-Coalition forces in the area, he said.

&#8220;The enemy here is very complex and divided into a number of factions,&#8221; he said. &#8220;Some are very [against] a democratic Iraqi government; some are anti-Coalition and some are Islamic Jihadists. They are here in the Sunni Triangle mixing. Sometimes they help each other out, sometimes they don&#8217;t.&#8221;

The 1-503 soldiers &#8212; deployed to Iraq from Camp Casey, South Korea &#8212; are proud to be involved in such an important assignment, Gubler added. The unit has one of the strongest fighting records in the U.S. Army.

It was christened &#8220;The Rock&#8221; after soldiers from the 503rd parachuted onto Corrigador Island, which guards the entrance to Manila Harbor in the Philippines, during World War II. The 503rd killed or captured thousands of Japanese defenders, paving the way for U.S. Army Gen. Douglas MacArthur&#8217;s triumphant return to the islands.

A 5,000-pound rock from Corrigador, which traveled to Iraq with the unit from South Korea, sits outside 1-503&#8217;s tactical operations center at Camp Habbaniyah to remind soldiers of the victory.

Living conditions at the base, which 1-503 shares with 1st Battalion, 506th Infantry Regiment, are Spartan, but the environment is one of the most pleasant in Iraq because of the large number of trees and plants on post.

The tempo of missions run by 1-503 will remain high as long as there is an enemy threat, he said.

So far, the major threat to 1-503 soldiers has been improvised explosive devices, which have damaged several Humvees operated by the unit, he said. Insurgents have also attacked 1-503 soldiers with direct fire on all of their missions so far, he said.

The training soldiers did in South Korea prepared them well for Iraq but was no substitute for field experience, he said.

&#8220;Unless they have been here before, it is hard for the average soldier to imagine the terrain, the culture, the people. Now the soldiers are coming together as teams. They are adapting and working through all their problems and they will be experts within a month,&#8221; he said.

Company C, 1-503 soldier Sgt. Dale Rogers, 36, of Winston Salem, N.C., said he is eager to take the fight to the enemy and not even slightly apprehensive about going into Fallujah.

The insurgents prefer to attack and then run away, he said.