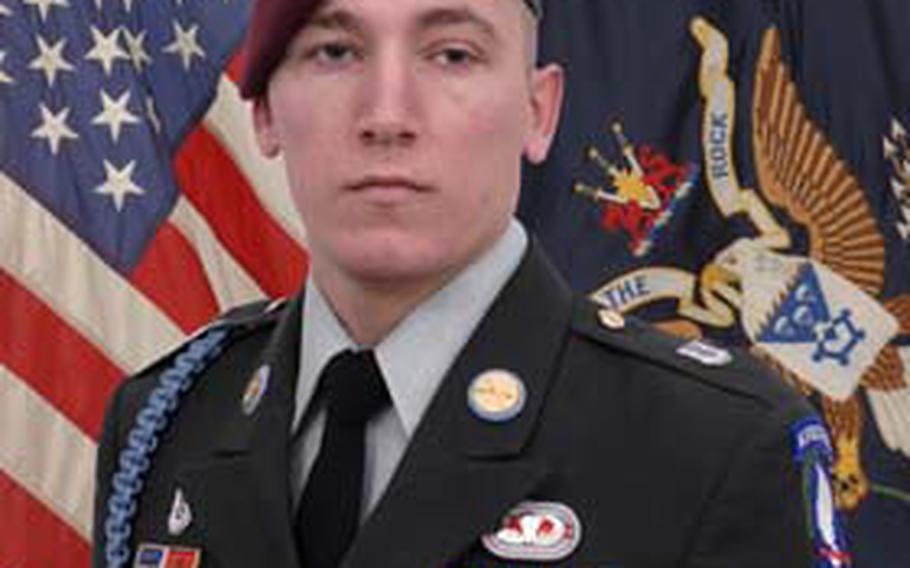 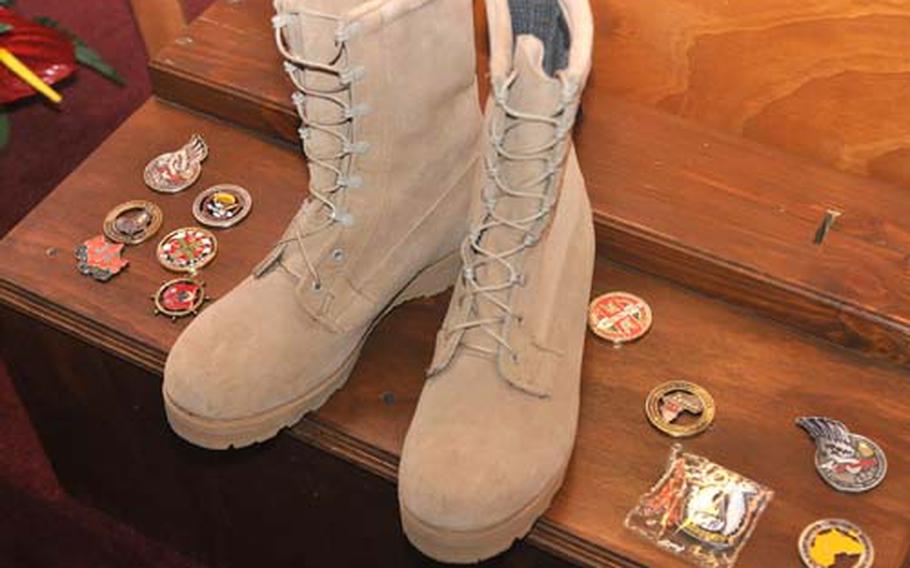 Buy Photo
Soldiers from a variety of organizations based at Caserma Ederle in Vicenza, Italy, left commanders coins as a tribute to Pfc. Nicholas Scott Cook, who was killed in Afghanistan on March 7. The community remembered Cook in a memorial service Tuesday. (Kent Harris/Stars and Stripes)

VICENZA, Italy &#8212; Pfc. Nicholas Cook was a member of 2nd Battalion, 503rd Infantry Regiment for only about six months. But that was more than enough time for him to leave his mark on "The Rock."

Cook was remembered Tuesday during a memorial service at Caserma Ederle. The 19-year-old soldier was killed March 7 when his unit came under attack in Kunar province. There also will be a memorial for Cook on Thursday, at 1 p.m., at the Warner Barracks chapel in Bamberg, Germany.

Cook, a machine-gunner for 3rd Platoon, Company B, and other elements of his company were trying to clear enemy fighting positions along a supply route between forward operating bases when the attack occurred.

In letters read at the service, Capt. Benjamin Nagy and 2nd Lt. Kevin McDonald wrote that during the assault, Cook&#8217;s unit was pinned down. Cook, already under attack, moved from cover to a less-secure location to provide better support for his comrades.

"You selflessly exposed yourself," wrote McDonald, the platoon leader. "Many of us here today simply would not be here" without Cook&#8217;s action.

Cook, who was posthumously promoted and nominated for the Bronze Star Medal, was also remembered for quieter times.

Nagy described him as "one of those soldiers you could always find doing the right thing all the time."

Pvt. Michael Bennett described his friend as a calming influence on base, forays around Italy and in the field. He wrote that he had other friends whom he had known much longer, but "you made the biggest impact on my life."

Nagy wrote that Cook always seemed to have a smile on his face. And he recalled talking to him about similarities between Afghanistan and his native Montana. Several recalled Cook&#8217;s love of snowboarding and that he had the opportunity to test the Alps before the unit deployed.

Cook was raised in Montana and enlisted in the Army in April. He is the second soldier from the battalion killed since it deployed to Afghanistan in December.