The Remagen bridge, six years after 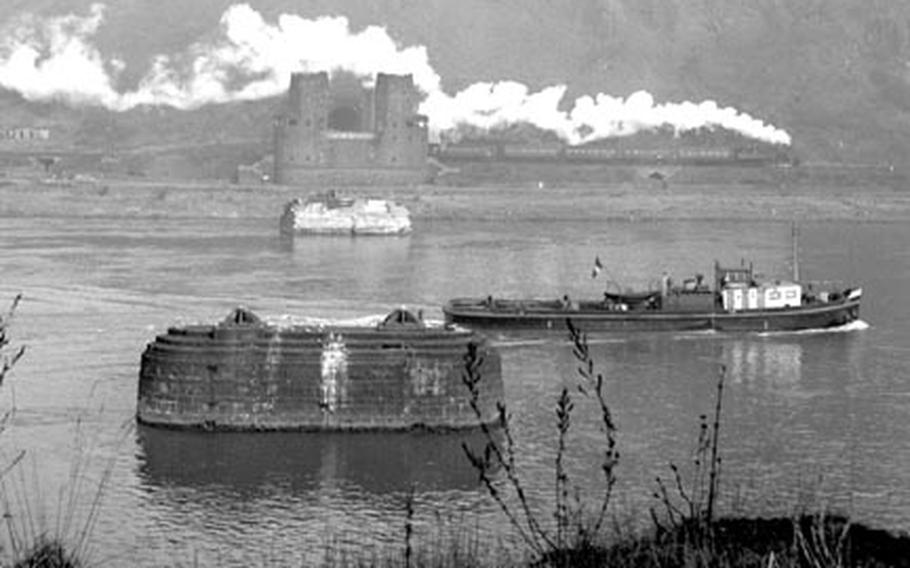 Buy Photo
A boat moves down the Rhine, past the remnants of the Remagen bridge. (Gerald Waller/Stars and Stripes)

Buy Photo
A boat moves down the Rhine, past the remnants of the Remagen bridge. (Gerald Waller/Stars and Stripes) 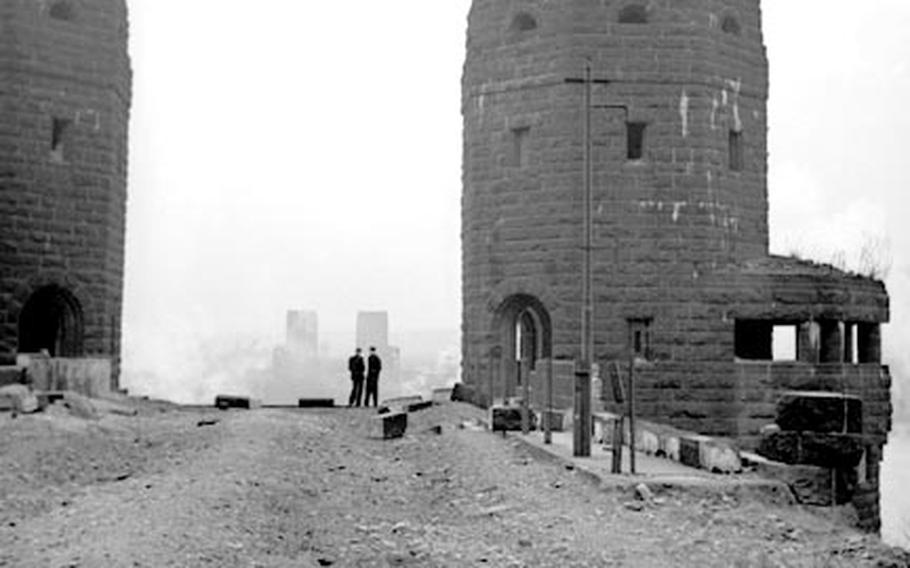 Buy Photo
Six years after the battle, only the stone portions of the bridge remained. (Gerald Waller/Stars and Stripes) 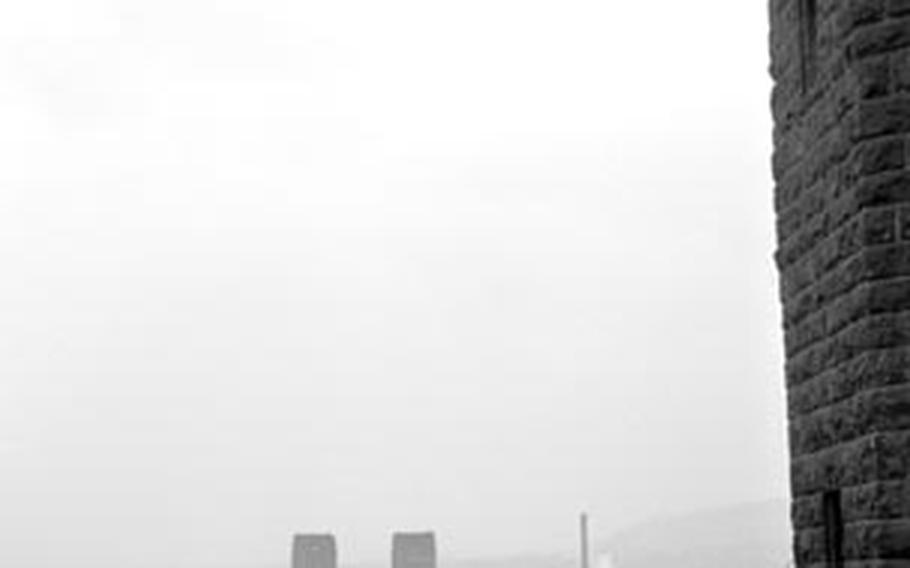 Buy Photo
The view across the Rhine at Remagen in 1951. (Gerald Waller/Stars and Stripes) 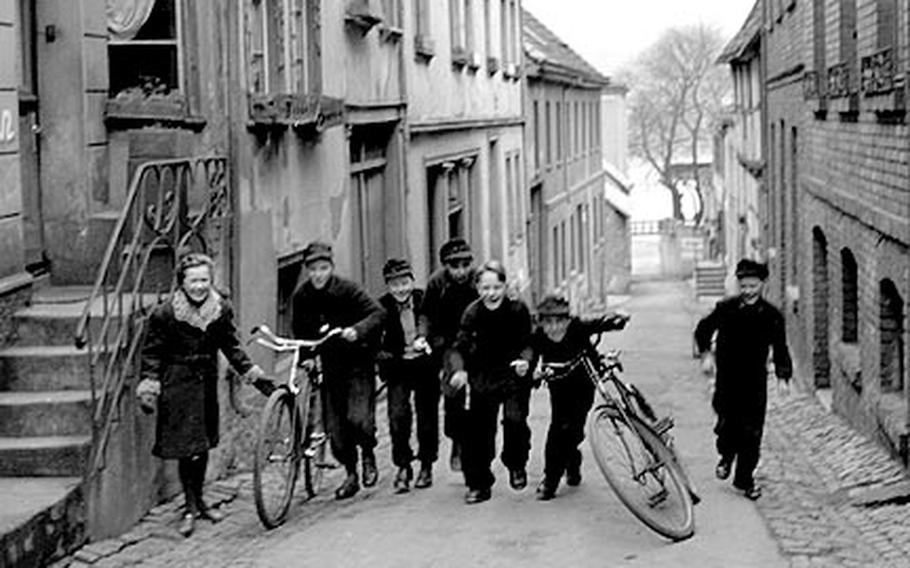 Buy Photo
A group of kids in the once-again-peaceful town of Remagen, 1951. (Gerald Waller/Stars and Stripes) 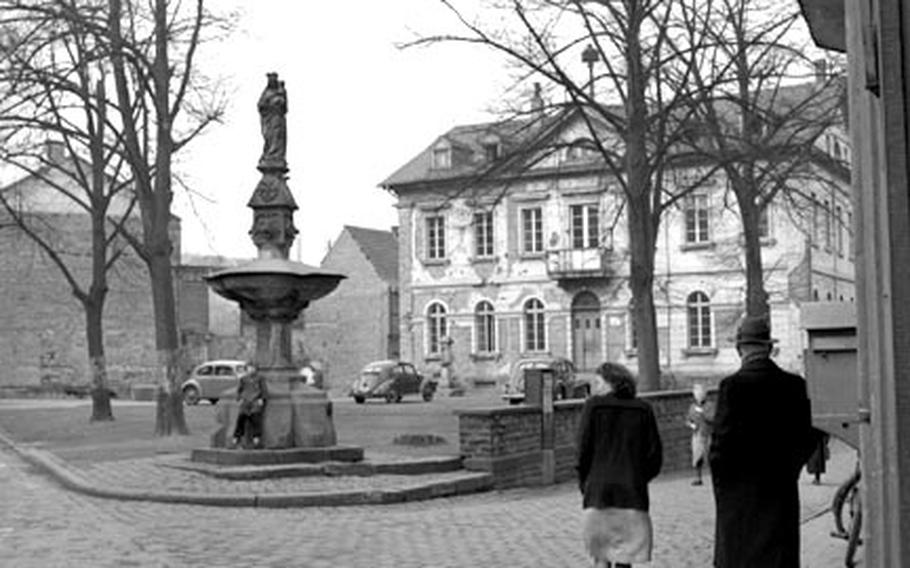 George E. Learned served in the 89th Cav Rcn Sq (Mecz) of the 9th Armd Div as a first lieutenant at the time of the capture of the Remagen bridge. He revisited the town for the first time since 1945 to gather material for this article.

WITH A LOW, rumbling crash that echoed off front pages around the world — the ugly Ludendorff Bridge plunged into the Rhine at Remagen. That was six years ago yesterday.

But for 10 days the three-span railroad bridge had served her American captors well. The majority of three U.S. divisions had streamed over the long-invulnerable Rhine on the plank-covered rails. Tanks and thousands of tons of supplies were sandwiched between the endless columns of slogging GIs.

Concentrated U.S. artillery finally silenced the long-range German artillery bent on destroying the bridge. But she was weak and tired. Two demolition charges blew out part of her flooring and later shells struck the superstructures — one of them hitting an ammunition truck.

On March 15, the battered bridge was closed for repairs. Two other bridges were already open — a pontoon bridge and a heavy-duty treadway. Engineers swarmed over the weakened structure and worked around the clock.

But shortly after 3 pm on March 17, 1945 the bridge creaked and groaned and slowly slipped under the foaming waters of the Rhine. Some engineers were carried to their deaths — others were injured, and a great number swam to the treadway bridge downstream and safety.

Thus ended the life of the bridge named for Gen Erich von Ludendorff in 1918.

For more than 25 years it served the normal purpose of any railroad bridge across any river anywhere in the world — and received no more notoriety than any other similar span.

But Remagen and the Ludendorff Bridge burst into worldwide fame on March 7, 1945 — the day it was captured by hard-charging GIs and tankers of the 9th Armd Div.

March 7 dawned gray and drizzly. The 1st U.S. Army under Lt Gen Courtney H. Hodges, after forcing the Roer River, was driving for the Rhine. The III Corps — on the right flank of the 1st Army's drive — received an order to swing southwest to the river and roll up more of the west bank. The 9th Inf Div was ordered straight ahead to the area of Bonn and Bad Godesberg. The 9th Armd — in the center of the drive — had the mission of taking Remagen and Sinzig, a tiny village on the banks of the Ahr River, a Rhine tributary which joins the big river just south of Remagen.

At Euskirchen, after his tanks and infantry had cleared the town, Maj Gen John W. Leonard, the division commander, heard of the capture of Cologne. He pushed on to Stadt Meckenheim — a scant 15 miles from Remagen — and ordered Brig Gen William M. Hoge and his Combat Cmd B to push to the Rhine at Remagen and Sinzig and seize bridgeheads across the Ahr. (Hoge is now commander of the IX Corps in Korea.)

Every commander in the armies, that day, dreamed of finding a bridge across the Rhine — but none thought much of their chances. For days in the north, the Germans had been blowing bridges in the face of advancing troops. Hundreds had seen intact bridges over the mighty Rhine — and the same hundreds had seen them crumple and fall into the surging waters.

Here is how Engeman told the story of the bridge:

"We got up at 5 am and started moving out at 7 am. A platoon of infantry was in the lead. Stadt Meckenheim was in such a mess a tankdozer had to clear a path for us and it was about 8 am before we got on the road.

"We had a little scrap with some small arms and mortar boys in three patches of woods. By noon we entered the woods, not three miles from Remagen.

"It was a little after 1 o'clock when we emerged from woods and could see the whole picture. There were vehicles and men crossing the bridge and no movement in Remagen.

"There were two trains on the other side of the river — one had steam up.

"Well, at 1:30 we got a company out of the half-tracks and started them down into town. We moved the tracks off the road and let Grimball (Lt John Grimball, of Columbia S. C.) take his platoon of tanks on in. I told him to get to the bridge and cover it with fire.

"I asked artillery to put some time fire on the bridge but they refused the mission — afraid of hitting our own men.

"Gen Hoge came up a little before 3 and we looked at the bridge and I remember something being said about it sure would be nice if we could get that bridge. It wasn't an order, but we still didn't have any idea of doing it. 1 kept thinking it would blow up in our faces.

"It was about 12 minutes past 3 when things started popping. Our artillery started plastering the east bank with smoke shells. The tanks pulled up to the west end of the bridge and shot up the Germans on the bridge.

"An explosion went off on the bridge. The infantry started going over but was forced back. I grabbed my glasses and through the smoke and explosions could still see the bridge.

"Three minutes later a prisoner was picked up who told us the bridge was to go at 4 pm. It wasn't a couple of minutes more until a second blast went off — but the infantry was crossing. Guns opened up all around us to protect the boys on the bridge.

"I told Mott (1st Lt Hugh Mott, of Nashville, Tenn.) to check the bridge and let me know how long it would take to get ready for the tanks. Most of the 27th was across by now.

"At 4:45 I reported back to Gen Hoge, 'Bridge intact. Am pushing doughs to other side, What are plans? Advise as soon as possible.' "

Engeman didn't know it at the time, but Hoge was having his own difficulties. Higher headquarters — on receiving the reports the Ahr River crossings had been made — had ordered a drive down the Rhine to force a linkup with Lt Gen George S. Patton's 3d Army.

Hone backed up Engeman — and turned his other task force around and ordered it into the bridge area. The news flashed on back to Leonard and then to corps, army and army group commanders and finally to Gen Dwight D. Eisenhower at SHAPE as he was eating dinner.

Without a moment's hesitation the planned assault to the Rhine was switched into a bridgehead operation and in 72 hours a two-battalion operation mushroomed into a four-division assault. The battle for Germany was joined and less than two months later it was ended.

But the rest of the story is history.

Remagen today is the same sleepy town it was before the war — and not too greatly marred from the terrific artillery pounding it took from German guns trying to destroy the bridge.

Mayor Hans Hemming has been returned to office (he was mayor during March 1945) and life is normal. During the siege, he asked protection for the civilian residents and hard-pressed commanders on the spot found transportation to move the population to Arweiler and Bad Neuenahr. While the German artillery was uncannily accurate on the bridge site, the sharp cliffs on the east bank caused many long-range shells to overshoot the bridge and hit the town.

The bridge itself, of course, is gone. All that remains are the two piers in midstream and the fortress-type towers on either side. The railroad tunnel across the Rhine is being cleaned out and will be sealed off — workers at the site report — to form a natural underground cave for the growing of mushrooms. Perhaps Remagen will gain new fame for the quality of its cultured mushrooms.

The 9th Armd Div, which had distinguished itself in the Battle of the Bulge, received the Presidential Unit Citation for Combat Cmd B. Eisenhower sent his congratulations, as did military and civilian leaders of the Allied world. But Ike went further and promised champagne for the division — and in a rest camp several weeks later it was delivered.

Thirteen Distinguished Service Crosses were awarded by Leonard. Six went to the infantry, four to tankers and three to the engineers who captured and saved the bridge.

It was "... a bold advance, characterized by a willingness to chance great risks for great rewards."