The power of participation 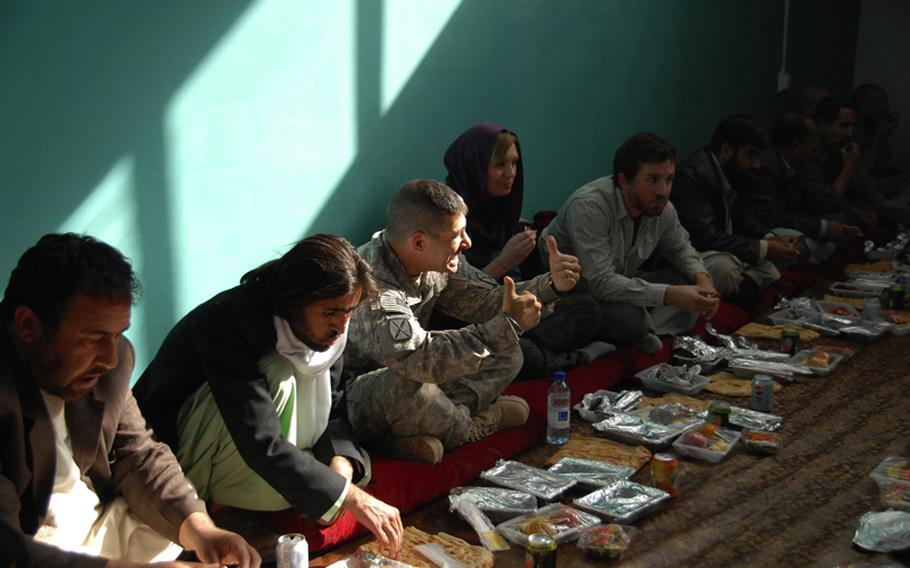 Lt. Col. John Paganini poses for a photo during a luncheon at the Dand District Center last week. The representatives of villages from around the district were there for a meeting with the Dand leadership and the governor of Kandahar. (Megan McCloskey/Stars and Stripes)

Paved roads? Not in your village.

High-yield wheat seed? None for you.

&ldquo;Don&rsquo;t participate in government, then that&rsquo;s what you get: nothing,&rdquo; Maj. Ned Ash, executive officer of the unit, said.

Dand is a relatively calm district set among volatile neighbors in Kandahar province and is often held up as a model for building governance. The military funnels all its money through the local government, letting the Afghan leaders of Dand choose and prioritize projects. The process begins with each village electing a malik to represent its interests, then the malik takes their needs to the 15-member district development council.

&ldquo;In the beginning they were all running up to me,&rdquo; said Lt. Col. John Paganini, commander of 1-71, recalling how the villagers expected development to happen when his unit arrived eight months ago. He wants to make it clear to the villagers that development begins and ends with their local government &mdash; not the U.S. military.

South of the river that splits Dand across the middle, the villages of Nakadak and Kadan have yet to elect a malik. Those who live there are ambivalent about Coalition forces and aren&rsquo;t interested in the local government.

A few years ago, successive maliks representing the two villages were assassinated, and since then, &ldquo;nobody has wanted to stand up,&rdquo; he said. Capt. Kevin Krupski, the commander of the troop that works in the area, said Nakadak is also hampered by the numerous and fractured tribes that live there, &ldquo;making the selection of a solitary representative difficult, to say the least.&rdquo;

Without a malik, the villages don&rsquo;t have a voice in deciding the development priorities of Dand. That&rsquo;s unacceptable, and the military believes in very tangible consequences for villages that choose not to participate in the process.

One of the larger construction projects in Dand is to pave a main road that runs north-south through the district. The two closely connected villages sit about half a mile apart from each other on that road. Unless those villages each find a suitable malik, the paved road will stop a kilometer from the first village and pick up again a kilometer from the other side of the second village. The part of the road that runs through the two villages will remain unpaved &mdash; a deterrent to commerce and economic growth.

The villages were also left out of a recent high-yield wheat seed distribution and the accompanying training.

Farmers around the district received the premium seeds in a massive push to improve their farming output from subsistence to profit, but the outstretched hands of those from Nakadak and Kaden were ignored.

The farmers quickly rallied and got in touch with a former villager who now lives in Kandahar City. He called up the military, saying he was the villages&rsquo; malik.

Paganini isn&rsquo;t convinced that the move wasn&rsquo;t a &ldquo;one-day thing to get wheat seed.&rdquo;

&ldquo;We kept some, and we&rsquo;re willing to give it to them,&rdquo; he said, but he first needs to see some real commitment, such as the would-be malik moving back to Nakadak.

A school that sits between the two villages won&rsquo;t open either until that happens (and until there are teachers to staff it &mdash; another reason it&rsquo;s still empty).

Canadian Maj. Bryan Mialkowsky, who is in charge of engineering projects in the district, said the road project will be completed however Paganini sees fit.

Withholding projects like paved roads &ldquo;is an effective tool, and it&rsquo;s been used in the past,&rdquo; he said. &ldquo;Locals really do change their opinion quite quickly.&rdquo;

Because of that, Paganini doesn&rsquo;t anticipate he&rsquo;ll have to skip over the villages.

When the paving begins soon at both ends of the road, working toward the middle where the villages are located, &ldquo;I&rsquo;m going to take all the elders and drive them down in my truck to the start of the road and show them&rdquo; just what they are giving up, he said.

If the villagers acquiesce and elect a malik &mdash; and Paganini is &ldquo;absolutely convinced&rdquo; that they will &mdash; then they will be rewarded with asphalt.

If not, the villages will be left behind with donkey trails while their government-friendly neighbors cruise to market on a paved road.