The pirates are mostly gone, but Japan sticks around in Djibouti 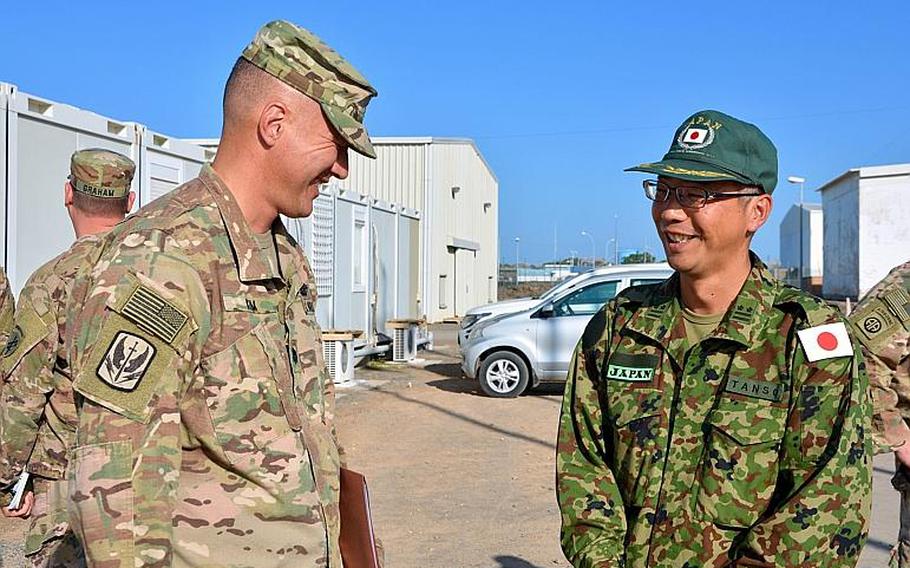 Japan plans to step up training efforts with east African nations, as Tokyo aims to work more closely with the U.S. in a region where China’s influence is on the rise.

“Japan is changing its focus from peacekeeping operations to more capacity building,” said Lt. Col. Masatoshi Tanso, who was part of a Japanese delegation that met this week with their American counterparts at Camp Lemonnier, Djibouti.

Over two days of talks, U.S. and Japan Self-Defense Forces members based in Djibouti considered ways to boost collaboration around the Horn of Africa.

While the Japanese are restricted from training Africans in combat tactics due to constitutional limitations on their forces, they can provide more support in areas such as instruction in disaster response, engineering and humanitarian relief efforts, officials said.

“I’m hoping to gain a better understanding of how the U.S. provides emergency and humanitarian assistance to improve the activities we provide to the Djibouti Armed Forces,” said Col. Akira Miyazaki of the Japan Ground Self-Defense Force, as quoted in a U.S. military statement.

During the past few years, Japan has sought to expand its mission in Djibouti, where China in 2017 set up its first overseas base. Beijing has kept a large presence in Africa for several years now, investing heavily in ports, infrastructure projects and mining ventures across the continent – and without asking questions about human rights and related issues that sometimes prevent similar Western investment.

In Djibouti, a tiny, impoverished country that borders Somalia but also offers access to important shipping lanes, China spends millions on public works projects. Beijing’s military expansion into Africa coincides with its One Belt One Road initiative to build a maritime and land-transport network stretching from the Far East to Europe.

For its part, Japan has been operating out of a small military post next to the U.S. military’s Camp Lemonnier in Djibouti. Japan’s Djibouti mission began in 2011 as part of an international effort to curtail a spike in piracy off the coast of Somalia.

But while instances of piracy off Somalia have dropped significantly and no longer pose a serious threat to commercial shipping — 237 incidents in 2011 compared to just nine last year — Japan has gradually increased the size of its base as it attempts to foster ties and gain influence in the region.

U.S. military officials said American efforts around the Horn of Africa are focused on promoting regional stability and developing partnerships with countries like Japan.

“The ability to work together in a dynamic environment directly strengthens security throughout East Africa,” said Lt. Col. Kenneth Kim, a civil affairs officer, in the U.S. statement.