The 'ornery rascal' returns to Alconbury — as graduation speaker 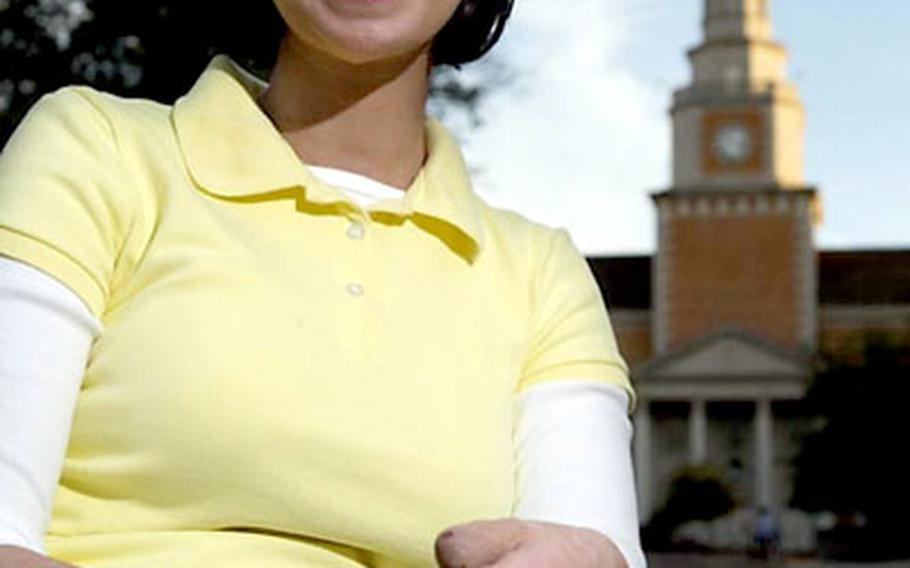 Lydia Evans, a former student at Alconbury High School at RAF Alconbury, England, will be the speaker at Friday&#39;s Alconbury commencement. A few years ago, Evans was diagnosed with bacterial meningitis, which resulted in the amputation of both of her legs as well as her fingers and thumbs. (Courtesy Lydia Evans)

High school seniors gather this time of year for ceremonies that usher them from the comfy cocoon of high school into the cold reality of adulthood.

This event commonly is accompanied by a speech as dry as the ink on their diplomas, delivered by a speaker whose name they forget before the thank-you notes are mailed.

But the 18 graduates of Alconbury High School at RAF Alconbury, England, may elude that stereotype. They will hear a speaker who might prove memorable, might deliver a worthwhile message and, although she hates to admit it, just might be an inspiration to her listeners.

Evans may have to learn to live with it, just as she has learned to live with more substantial burdens in the past two years. At 22, she is not much older than the graduates she will address, but she has much to tell them about the vagaries of life once the senior prom has passed.

Following a party during her sophomore year at the University of North Texas, she became ill. At first, she thought she had the flu. But doctors diagnosed a case of bacterial meningitis, a serious infection of the spinal cord fluid and the fluid that surrounds the brain.

She spent six months in the hospital, including two weeks in a coma. Her parents planned her funeral after doctors gave her a 1-in-25 chance of surviving. Both of her legs were amputated below the knees. Her fingers and thumbs also were taken by the surgeon&#8217;s knife.

And when Evans had recovered sufficiently from the disease and the surgeries to assess her situation, she reacted in a way that goes to the heart of why she is a perfect pick as a commencement speaker, and why she probably forever will be considered an inspiration.

It is a strength that enables her to laugh now as if she has a feather in her corset. She talks about the disease and its permanent aftereffects as nothing more serious than mild sunburn.

Four years ago, Evans, the daughter of Jay and Elizabeth Evans of Fort Worth, Texas, was a senior at AHS. Although her father&#8217;s Air Force career took the family away before she could graduate, her memories of the school are clear and glowing.

The invitation to speak is an honor, Evans said, the completion of a path that was interrupted by her father&#8217;s transfer months before she could graduate.

Cyndi Taggert, a teacher and senior class sponsor who remembers Evans, said, &#8220;When I called her and asked her to [speak at commencement], she burst into tears.&#8221;

Knuckling down for class was not part of Evans&#8217; agenda in high school. She was, in her words, a &#8220;social butterfly&#8221; with better things to do than study and make the grades she was capable of making.

But she impressed those who knew her with her personality and determination. So when news of Evans&#8217; run-in with bacterial meningitis reached the hallways and teachers&#8217; lounge at Alconbury High, there was concern, but also confidence.

The school, including the faculty and the National Honor Society, raised money to help the family&#8217;s mounting medical bills.

So, Taggert said, when the senior class members decided they wanted a young speaker at their commencement, which is Friday at the cathedral in Peterborough, the teacher suggested Evans.

It is no small feat that Evans can fit this into her schedule. She is one of the founders of Lydia M. Evans Strides for Awareness Foundation, which spreads the word of bacterial meningitis to students at her school. A recent 5-kilometer run raised $5,000 that will pay for vaccinations against the disease for several incoming students.

She is spending the summer as an intern with the Landmine Survivor Network in Washington, D.C.

Evans also has received permission to visit Walter Reed Army Medical Center in Washington, D.C., where she will talk to soldiers who lost limbs in Iraq.

Evans pledged to make her life normal again. She dates and says young men are not put off by a woman with no legs if the woman doesn&#8217;t seem to mind it.

A political science major, she hopes for a career in politics and says it is not far-fetched to think about elective office on the federal level.

But for now she has more immediate matters. There is a speech to write and deliver.

The mere suggestion of it, however, elicits a response that is most un-Lydia-like.

Bacterial meningitis is the more severe form of meningitis, which is an infection of the fluid in the spinal cord and around the brain, according to the national Centers for Disease Control and Prevention.

Viral meningitis can clear up in a couple of weeks without specific treatment.

But bacterial meningitis can cause death despite treatment and often causes brain damage in survivors or leaves them with physical problems.

The early signs of bacterial meningitis include high fever, headaches, vomiting, nausea and neck stiffness. It can strike anyone of any age, including healthy and active young people.

Early on, bacterial meningitis can be treated with antibiotics.

The disease is contagious, but not as much as the common cold or flu. The bacteria are spread through the exchange of respiratory and throat fluids, by such things as coughing and kissing. Simply breathing the air around an infected person is not sufficient to contract the disease.

About 3,000 cases of the disease are diagnosed each year in the United States, resulting in about 300 deaths.

Vaccines have proven safe and effective in preventing the disease.