As the sun nears the horizon, another long and busy night passes for Airmen 1st Class Chad Brannaman (left) and Alhasan Thomas. Whether it takes a cup of coffee or a portable heater, staying warm is a constant consideration for members of the 86th Air Mobility Squadron, which is part of the 86th Contingency Response Group, headquartered at Ramstein Air Base, Germany. (Kevin Dougherty / S&S)

As the sun nears the horizon, another long and busy night passes for Airmen 1st Class Chad Brannaman (left) and Alhasan Thomas. Whether it takes a cup of coffee or a portable heater, staying warm is a constant consideration for members of the 86th Air Mobility Squadron, which is part of the 86th Contingency Response Group, headquartered at Ramstein Air Base, Germany. (Kevin Dougherty / S&S) With the aid of night-vision goggles, Air Force Master Sgt. Gerritt McCrory in darkness marshals cargo and passengers from the belly of a C-17 transport plane. (Courtesy of U.S. Air Force) 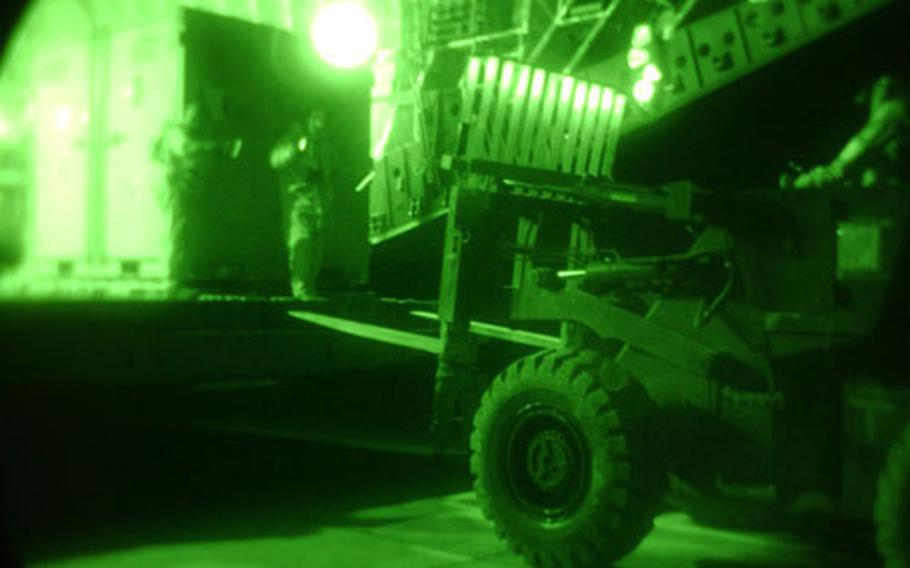 Airman 1st Class Tradell Black, operating a forklift with night-vision goggles, kept his focus despite issues at home. His wife, Betty, is expecting their first child May 9. (Courtesy of U.S. Air Force) Another misty morning, another night come and gone at Bashur Airfield in northeastern Iraq. Aerial porters with the 86th Air Mobility Squadron out of Ramstein Air Base, Germany, assemble to unload the last C-17 of the night shift. For the first week of the deployment, the only planes coming into Bashur arrived in the dead of night for security purposes. The overnight crew of aerial porters — the people who unload and load planes — worked solely with night-vision goggles to a degree unmatched in the history of combat. During that first week, the night shift handled 84 cargo flights without incident. (Kevin Dougherty / S&S)

BASHUR AIRFIELD, Iraq &#8212; A few months ago, a Navy fighter pilot aboard the USS Lincoln in the Persian Gulf spoke of the &#8220;insanity&#8221; of landing a plane on the deck of an aircraft carrier at night.

It is with that same spirit that members of the 86th Air Mobility Squadron have performed some nighttime madness of their own in northern Iraq.

During the first week of operations, every cargo plane that flew into Bashur airfield &#8212; all 84 &#8212; landed at night without the benefit of any lighting, due to security concerns. Equally remarkable was what happened afterward.

Teams of aerial porters &#8212; the people that handle the cargo &#8212; worked in pitch darkness with night-vision goggles, operating heavy machinery around pricey planes and soldiers laden with gear and uncertainty. Aircraft mechanics got into the act as well, marshaling planes around the ramp in the dead of night.

Certainly not on the scale demonstrated in northern Iraq.

Along with the 786th Security Forces Squadron, the aerial porters serve as the cornerstone of the 86th Contingency Response Group. (When it deploys, the group adds expeditionary to its organizational name.) While the cops cast a broad security blanket, the air mobility squadron establishes and maintains airfield operations.

In Bashur, aerial operations began the night of March 27, a day after 1,000 paratroopers and 20 airmen dropped into Iraq to help set the stage for a northern front.

Much of the 86th CRG arrived &#8212; with fighter escorts at the ready &#8212; aboard the first two C-17s to land in Iraq. The airmen had only one hour to prepare the way for a line of C-17s following in their wake. The flow, which was officially extended to daylight hours April 11, continued unabated for two weeks, until the 173rd Airborne Brigade out of Vicenza, Italy, and other Army elements began moving south to Kirkuk.

The Iraqis sent a not-so-friendly greeting March 30 when they lobbed a missile at Bashur airfield. It missed with some distance to spare, but it served notice to the airmen and soldiers assembling in the northeast that they were in harm&#8217;s way.

For Maj. Konrad Klausner, the squadron&#8217;s director of operations, the night before was memorable as well.

He recalls stepping out onto the ramp and seeing four C-17s, one C-130 and two helicopters, plus aerial porters guiding soldiers across the Tarmac. It was quite a sight, though one needed night-vision goggles to take it in.

And they were working in the dark, marshaling and unloading planes.

During that first week, the squadron handled 84 flights that brought in about 3,000 troops and 6 million pounds of cargo.

Years in the making

For the 86th CRG, that nighttime capability has been three years in the making, though the use of night-vision optical devices dates back to the Vietnam War and the advent of monocular sniper scopes, said Col. Steve Weart, the group&#8217;s commander. Back then it was a tool of special operations personnel.

While Operation Rice Bowl &#8212; more commonly known as Desert One, an attempt to free hostages held in Iran &#8212; failed, the use of night-vision optical devices, or NODs, intensified, first on land, then in the cockpit.

By the late 1980s, the technology had spread to conventional ground forces. Weart said it wasn&#8217;t until 2001 in Afghanistan that they became standard equipment for regular Air Force pilots in aircraft such as the C-17.

A year earlier, the 86th CRG, headquartered at Ramstein Air Base, Germany, began to explore the possibility of issuing them to aerial porters and aircraft mechanics.

Several months earlier, at the airport in Kandahar, Afghanistan, a stateside air mobility unit quickly went to nighttime operations, but with disastrous results. There were several accidents, including one that killed a servicemember on the ramp.

An instructor was brought in to teach the airmen how to use, clean and care for the devices. Over several months, as the squadron found time between missions, the training escalated, from walking around and driving Humvees in open areas to marshaling planes and using forklifts. The training continued until February of this year.

&#8220;Nobody else has been able to do it without bending something or hurting someone.&#8221;

Only two serious nighttime mishaps occurred, neither of which were the fault of the air mobility squadron.

In the first case, a soldier wandered off course, walked into a parked forklift and tripped, knocking out a front tooth. The other incident involved an Air Force cop, who was clipped in the head by the lid of a metal box, blown off by jet wash from an aircraft as it exited the ramp. He also suffered a broken finger.

Those early nights of the deployment, when the moon was waning, was tough on both pilots and porters, said Klausner, who up until this week was working the late shift.

Typically, aerial porters take about an hour and 45 minutes to unload a plane, Marra said. At Bashur, the night crew handled two C-17s every 30 minutes over a three-hour period for the first four nights.

As the bombs fell on the Iraqi capital, the airmen in the north were doing their own bang-up job.

On April 4, the day after U.S. forces seized Baghdad&#8217;s international airport, night operations at Bashur crested with the arrival of 18 cargo aircraft.

On that day, April 11, Iraq&#8217;s third largest city, Mosul, fell; the United States declared the Baath Party out of the governing business; and airmen at Bashur handled 21 planes.

Among others, Klausner credits McCrory, Master Sgt. Marty Goins and Tech. Sgt. Rickey Puckett, squadron supervisors, with keeping the staff relatively fresh by rotating airmen on and off the night shift.

That was done, Klausner said, &#8220;to give them not only rest, but to give them the exposure and the training so that whoever we put on nights gave us flexibility.&#8221;

Experts say that one hour on NVGs equates to three hours of regular eyestrain. To reduce such strain, airmen working the night shift learned to flip them off every chance they got.