The night of the hunters 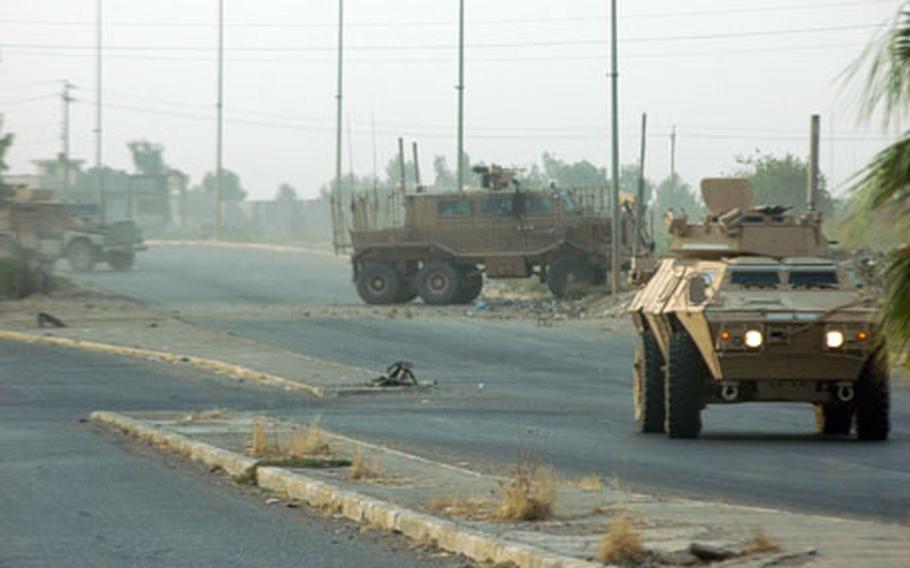 A buffalo is seen in the streets of Mosul on Friday after the dust settled from a recently exploded roadside bomb. None of the men in the vehicle were injured, but they were all taken to see medical personnel following the explosion. The truck was damaged beyond the point of carrying out its duties and was returned to base for repairs. (Les Neuhaus / S&S)

A buffalo is seen in the streets of Mosul on Friday after the dust settled from a recently exploded roadside bomb. None of the men in the vehicle were injured, but they were all taken to see medical personnel following the explosion. The truck was damaged beyond the point of carrying out its duties and was returned to base for repairs. (Les Neuhaus / S&S) 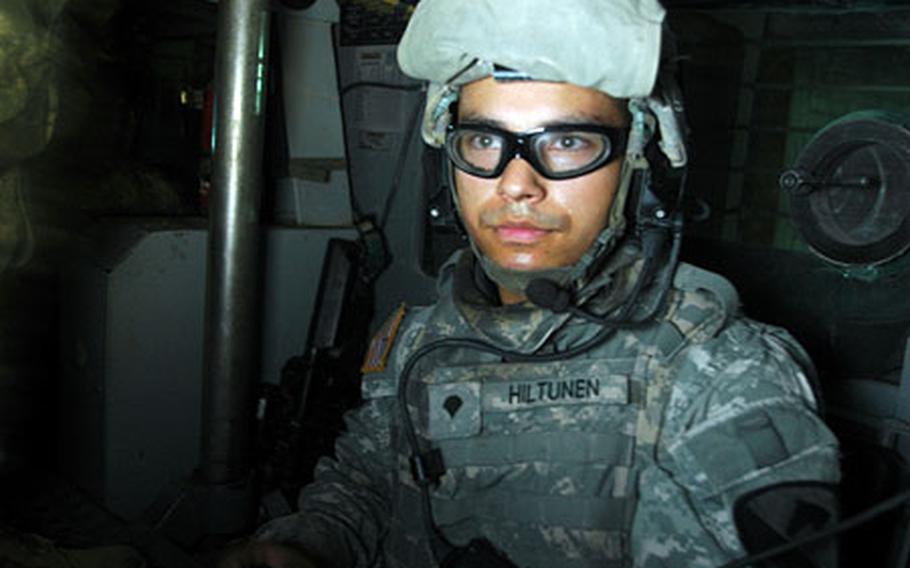 Spc. Elmer Hiltunen keeps a vigilant watch over a screen, which helps the route-clearance team’s ability to monitor the area outside area of his vehicle during Friday&#39;s pre-dawn hours in Mosul, Iraq. His vehicle was in lead during the operation. (Les Neuhaus / S&S) 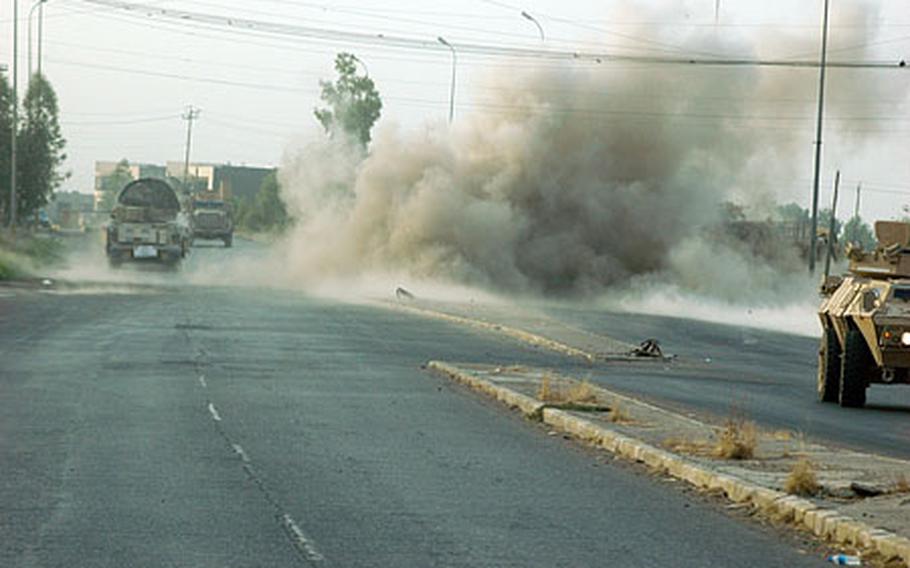 A sudden cloud of dust and debris immediately follows the uncontrolled detonation of a roadside bomb in Mosul, Iraq, on Friday. Obscured in the fog is a hulking armored truck referred to as a “buffalo” by U.S. troops. The buffalo, along with several other armored-personnel carriers and tank-like vehicles, were a part of a deadly route-clearance patrol carried out by Echo Company, which is a part of the 2nd Battalion, 7th Cavalry Regiment, 4th Brigade, 1st Cavalry Division. (Les Neuhaus / S&S)

It&#8217;s 7:50 a.m. Friday and the men of Company E&#8217;s 2nd Platoon have already been at work for three hours, searching for the most deadly foe of American forces in Iraq: roadside bombs.

A vehicle known as a Buffalo has pulled up to a hole off of the street suspected of containing a planted bomb meant to kill American soldiers. Seconds into the search, a resounding explosion occurs and the vehicle, momentarily, is nowhere in sight. About 20 seconds later, after the dust begins to settle, it re-emerges into view.

Few could argue with him.

Every day in Iraq&#8217;s second-largest city, more than 100 men work around the clock to clear the city&#8217;s streets of roadside bombs in an array of military-type trucks looking like they had once graced the set of an apocalyptic Mad Max movie. Zigzagging through the streets in a convoy of different armored-personnel carriers armed to the teeth with heavy machine guns, and backed by Bradley fighting vehicles, their mission is one of routine peril. They come under constant fire, being one big lurching bull&#8217;s-eye for rebel fighters.

He and the other men of Company E are members of the 2nd Battalion, 7th Cavalry Regiment, 4th Brigade, 1st Cavalry Division. The battalion has lost eight men since December.

It is the only U.S. military entity dedicated to securing Mosul&#8217;s 1.8 million people, as compared with the 27 U.S. Army battalions prowling Baghdad&#8217;s restless streets, which brim with more than an estimated 7 million.

Bryant, 33, along with the men in the buffalo that withstood the deafening explosion, said his ears were ringing only minutes before. After getting the damaged vehicle back to the base, the men undergo a mandatory medical screening and once they are cleared, they will continue their work.

In one vehicle, Spc. Elmer Hiltunen, a vigilant 21-year-old soldier from Chicago, looked intently for signs of life on a special screen giving him a close-up view of the Buffalo. He saw the men moving about, seemingly unharmed.

Hiltunen and the rest of the three troops, and another interpreter riding in the same truck, sweated through their clothes, a result of an air conditioner on the fritz &#8212; the only solace of fresh air coming from the gunner turret on top, which was clogged with another man fixated down a side street with his weapon.

Their vehicle had the point of that particular mission, an often-dangerous duty.

The route-clearance teams come under constant &#8220;harassment&#8221; by insurgents shooting machine guns and rocket-propelled grenades at them.

On one recent convoy, bullets bounced off the resistant windows, and another vehicle withstood the direct hit of an RPG. The soldiers had a difficult time determining from which direction the fire was coming, and on civilian streets where people go about business as usual, the men of the 2-7 can&#8217;t risk having bullets fly around recklessly.

Civilians are already in jeopardy when the snake-like convoys weave into neighborhood streets. People will usually keep a distance from the clearance teams, knowing they are magnets for trouble.

In one example of civilians&#8217; safety being questioned, a man was walking no more than 10 feet to the right of the Bradley on a sidewalk when the tank-like vehicle was passing by on the street. Suddenly, and without warning to anyone, it inadvertently set off a bomb by its left tracks, rocking the neighborhood and sending the man, unprotected by the luxury of thick steel armor, running for cover.

He was observed looking slightly dazed and confused, and turned around, walking in the direction from which he had just come. None of the soldiers had the time to get out and check on the man, as is often the case.

In situations like that, they have to remain as alert as ever, company leaders said, wary that a firefight might ensue &#8212; a tactic used by insurgents to perpetuate a state of confusion on U.S. troops once a roadside bomb has been set off in their path.

Remarkably, none of the men lost in the 2-7 since December was from Company E.