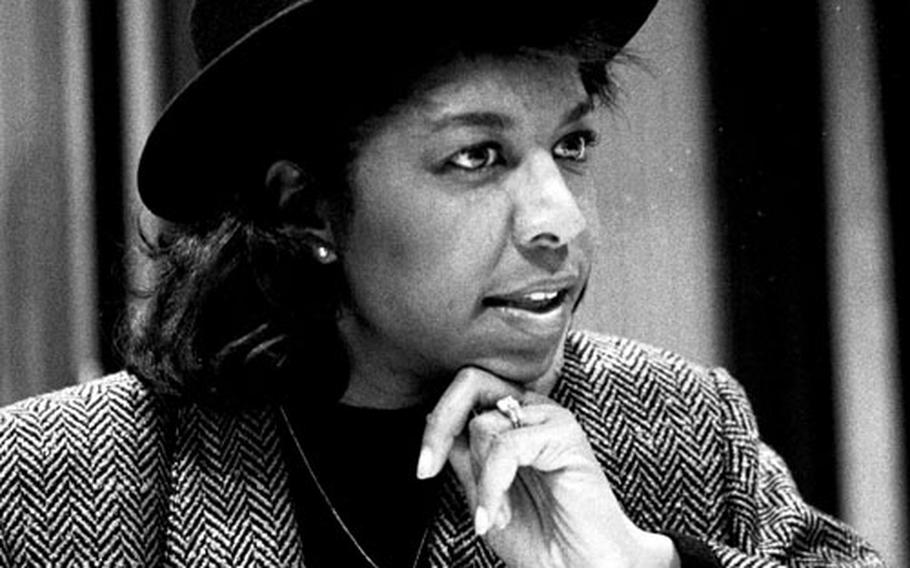 Cole's life recently took a turn she'd prayed for &mdash; one that added richness and happiness."Is today the 17th?" she asks. It's two months today &mdash; our anniversary. And here I am (in Dortmund, West Germany) working like a dog," she adds laughing.

On Sept. 17 Cole married record producer Andre Fischer. And, with a new album and a new husband, "life is great."

"Life has been especially good since I got married," Cole says, emitting a special glow as she talks easily about the new man in her life.

"I really think that God made it so. I look at this as being an answer to a serious prayer. My son needed a father, I needed a companion and a wonderful man in my life. He's a great person."

Fischer was the original drummer and founder of the group Rufus with Chaka Khan. He arranged and produced two of the songs from Cole's latest album of mid-tempo ballads, Good to Be Back. His work on As a Matter of Fact and Gonna Make You Mine was before they "had any feelings of serious affection toward one another," she says. But she recently did a music soundtrack for a Disney film, which Fischer produced.

"It came out great. I'm really happy about it because when an artist marries someone in the business who also has visibility, there's a tendency for people to shy away. I wanted so much for him to be the producer of this song. I think this will open up a whole new avenue for both of us &mdash; people can hear the collaboration of husband and wife together. It's a pretty cool idea."

In a relaxed interview in Dortmund, just off an airplane from Rome, but before taping a German television show, Cole talked about her new album, her father, singer Nat "King" Cole, and her life.

Good to Be Back is rising on the charts in England and in the United States. The title has no special meaning, Cole says. "It just sounded right.

"It seems a lot of people hear the title and think I've been away, but I haven't really." The album also features the lovesong duet I Do with Freddie Jackson.

The eldest of five children born to the legendary Nat "King" Cole, her sparkling light brown eyes light up as she remembers her childhood years.

"I think when I was born my dad wanted a son. I tried to be that for him, even though I was naturally a tomboy. My dad liked that about me because we could hang."

She says their time together was spent miniature golfing, at movies and in her dad's. sports car, which he drove "all over really fast."

She was 15 when her father died in 1965 at age 45. Lung cancer claimed the life of the man whose distinctive voice churned out a string of pop hits from the early1950s that made him a household name.

Cole thinks "it's wonderful" that her father's songs are still played and recorded today.

"That his work would still live on after he's gone is the greatest tribute that anyone can pay to any individual. That means that your life has been more than just productive. That's some serious longevity.

"I think we all wish to leave either an heir behind or some kind of characteristic about ourselves that is important enough that people will remember."

Plans to do a two-album tribute to her father are still in the works, Cole says.

"It really needs to be done. I'm hoping this coming year. It won't take that long. It's just a matter of getting all the logistics together. Picking the material is certainly no problem.

That she is rapidly approaching her 40th birthday also is no problem, she says.

"I've always been older than my years. Every now and then I think about it and I try to trip a bit, but it just won't happen. I'm younger-looking than most 40-year-old women that I know."

Since childhood she vowed to "always look good ... be in shape ... take care of myself."

"I didn't really start living life until I was about 35 ... So I feel like a lot of things are very new and very fresh."

Perhaps suddenly having become a new mother helps to keep her young, also.

She says it's fun, and her 12-year-old son Robbie is especially pleased to play big brother to Fischer's 6- and 8-year-olds.

She is pleased, too, with Robbie's reaction to having a new daddy.

"He loves it. It's more that he's got a buddy, who sometimes has to be a parent. He's entering a very serious stage of his life. I'm glad it's not totally on me, andit prepares my husband for his son who is only six."

It wasn't so many years ago that Cole didn't feel prepared. Perhaps fame came too fast.

It was 1972 and she was near a degree in psychology from the University of Massachusetts at Amherst and had plans for medical school when she was discovered by a talent agent while singing with a local band.

"The agent said, `Don't-you want to sing?' 1 thought, really? You mean you can make a lot of money doing this.

"When I thought of my father doing it, it wasn't the same. It just never occurred to me that I would want to do that. I certainly didn't want to tell my mother because I knew she wouldn't be crazy about it. She wanted me to finish my education &mdash; which I did &mdash; and become a doctor." Her plans for medical school were shelved.

Her smashing Inseparable debut in 1975 was followed in 1976 with Grammy awards for new artist of the year and best R&B female vocal perfornamce for her single This Will Be. Her early albums were produced by Margin Yancy, whom she married in 1976.

After Inseparable came six more albums for Capitol, her father's record label. There was a third Grammy, then throat polyps that caused her to lose her voice. And then drug addiction. Her career plunged.

She entered a rehabilitation center in Minnesota for six months to recover from a dependency on cocaine, pills and alcohol.

She had an operation to fix her throat, started work on a new album and went back on the road. But in 1983, she was back on drugs &mdash; and then, back inrehabilitation. This time, it worked.

She says now that the first "rehabilitation period was not long enough for me to really get a sense of what was happening, that's why I went back so quickly."

Cole blames her addiction on a number of things: lack of self-esteem, pressures and almost overnight success.

"I think that everyone who's ever had an experience with drugs can't really pinpoint it, but it does start with low self-esteem. People look at me when I say thatlike ... 'You don't look like you have low self-esteem.'

"I worked very hard to be in the place I am right now. When you have low self-esteem you please others before pleasing yourself. You're not number one in yourlife... You don't put yourself on a high scale.

"And that could. have been because of the family I was brought up in &mdash; where expectations were so great ... the pressures. Then when I became successful, it happened very quickly. I hadn't had a chance to get to know who Natalie was."

That's no longer the case, Cole says. A changed, happy woman, she can't envision any regressions. "Oh no," she says confidently. "I have so much to live for. It was a time I regret, but I learned a lot. I wouldn't recommend it &mdash; that's not the only way you can learn about life, but for me it really turned me into a stronger person."