The new home of the law 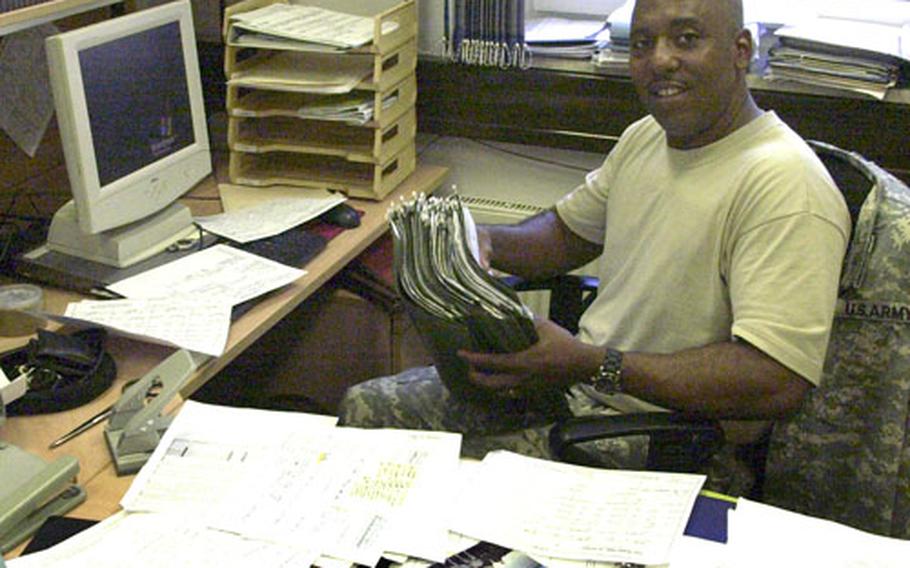 Master Sgt. Douglas Clevester Jr., 38, was one of the first SJA staffers to arrive in Grafenwohr. Here, Clevester, of Houston, sorts through a clutter of files as he moved into his new office at the legal center. (Seth Robson/ S&S)

GRAFENW&#214;HR, Germany &#8212; The departure of the 1st Infantry Division from Europe means legal services for the U.S. Army in Bavaria are moving here from W&#252;rzburg.

Lt. Col. Mike Mulligan, Staff Judge Advocate (SJA) for the Joint Multinational Training Command, said his office, which used to fall under 1st ID at W&#252;rzburg, would be established at Grafenw&#246;hr by January.

The unit &#8212; which comprises 30 staff including prosecutors, court reporters and paralegals &#8212; is part of an expansion that will see Grafenw&#246;hr grow from a 1,000-soldier garrison with 2,000 military family members (according to an April 2005 census) to a brigade-sized facility with 4,500 active-duty soldiers and 7,000 family members by 2008. The Army is spending $600 million expanding the base to accommodate the new arrivals, garrison officials said.

&#8220;The SJA is the primary legal adviser to the commanding general who is responsible for implementing military justice for the district,&#8221; Mulligan said.

The SJA serves as a liaison with German police, reviews contracts, looks at international law and provides legal assistance to soldiers&#8217; family members and dependents, he said.

People will notice a larger operation and functions being performed in Grafenw&#246;hr that were performed by 1st ID, he said.

&#8220;This is directly related to having the Strykers (2nd Cavalry Regiment) coming into Vilseck because they are one of our larger clients. When you bring 4,500 soldiers into an area with their family members you have the legal work of a small town and you need to plus up your assets to make sure they are supported,&#8221; he said.

SJA will use the Vilseck Court House for courts- martial. Last year there were about 10 courts martial at Vilseck and 27 at W&#252;rzburg. Mulligan said those numbers are likely to be reversed over the next year.

The Strykers would not just add to the number of courts-martial at Vilseck. They are expected to generate a lot of other legal work, he said.

The Grafenw&#246;hr Legal Center, which falls under the SJA, will become a client service building for legal assistance and claims.

One of the first SJA staffers to arrive in Grafenw&#246;hr, Master Sgt. Douglas Clevester Jr., 38, of Houston. He moved into his new office Thursday.

Clevester, a paralegal, said the move was happening at a difficult time since it coincided with the Styrkers&#8217; arrival but that so far things were running smoothly. He said he expected the SJA mission to remain the same despite the move to a new command.