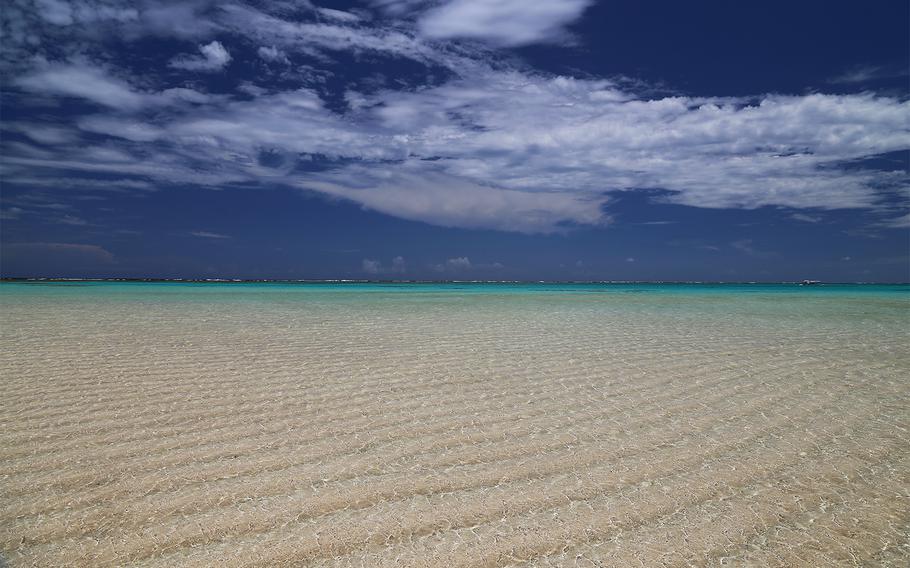 Buy Photo
Yoron Island is famous for the Yurigahama sandbank, which appears for a few hours at low tide. (Aya Ichihashi/Stars and Stripes)

Buy Photo
Yoron Island is famous for the Yurigahama sandbank, which appears for a few hours at low tide. (Aya Ichihashi/Stars and Stripes) Buy Photo
Yoron Station on the "Milky Way Galaxy Main Line" is a great spot to visit in Yoron Island, Japan. It is not an actual train station, just a setting for photo ops. (Aya Ichihashi/Stars and Stripes) 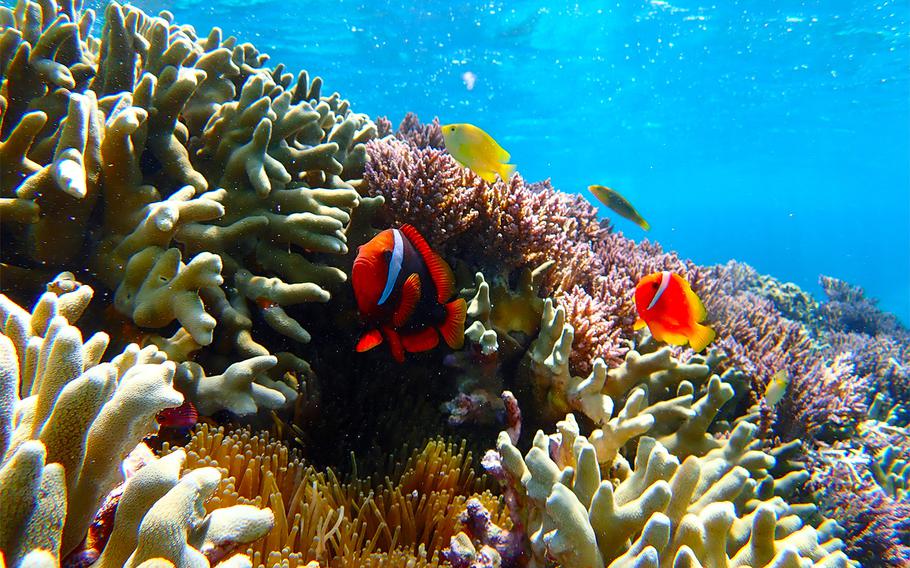 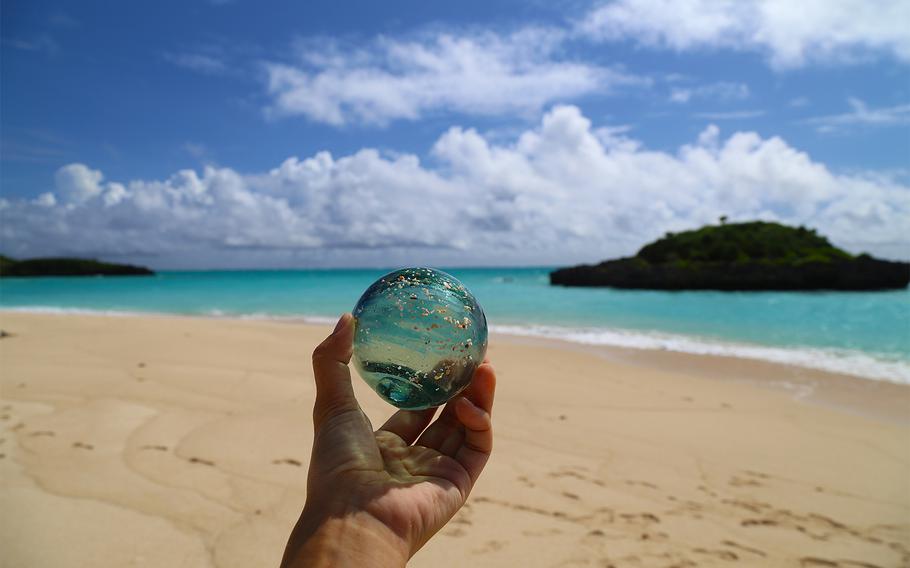 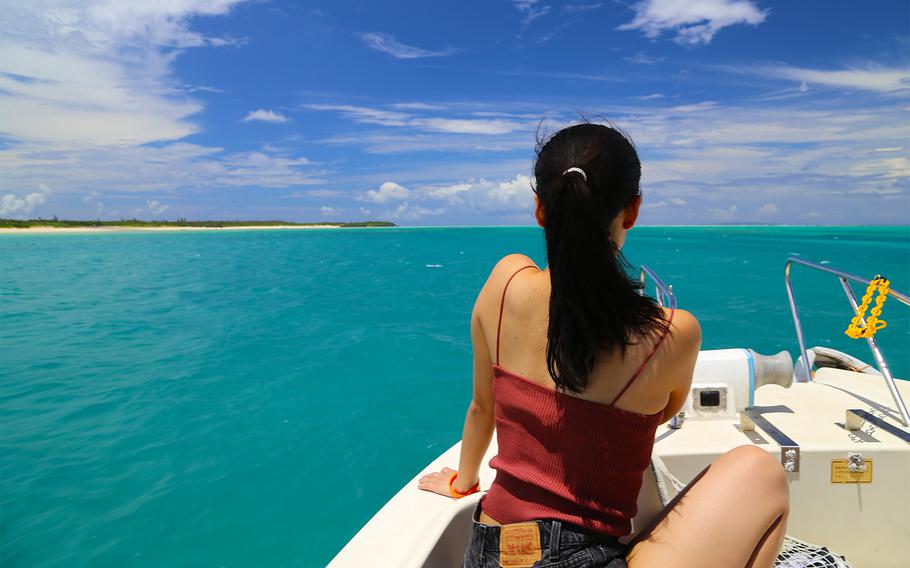 Yoron Island, a part of the Amami archipelago of Kagoshima prefecture, is a slice of Greece just two hours by ferry from Motobu Port in northern Okinawa.

Many buildings on Yoron are painted in the iconic blue and white reminiscent of the Greek island of Mykonos. In fact, Yoron and Mykonos have been sister cities since 1984.

Yoron, population about 5,000, is but 14 miles from Okinawa. The island is famous for the Yurigahama sandbank, which appears for a few hours at low tide and lasts only until the tide rises again.

The phenomenon occurs around a new moon or full moon, when the tide is lower than usual.

Yurigahama, also known as “phantom beach,” was nominated by the Zekkei Project in 2014 as one of 50 places to see in Japan before you die. The best time to spot the sandbank is from March through September.

Summer visitors may find a boat or personal watercraft at Oganeku Beach for the half-mile trip to Yurigahama for 3,000 yen (about $28).

The island provides countless photo ops to back up your vacation brags to friends back home. After 12 years of looking, I even found a floating glass ball on the beach; I couldn’t believe I found one on Yoron.

The island is overstocked with natural beauty. Its emerald green and blue waters seemed to have flowed from freshly opened buckets of paint. Up close, the waters near the sandbank are crystal clear. Photography is rampant as visitors vie for that “must-see-before-you-die” shot.

Snorkelers may take a tour to spot anemone fish and sea turtles for 4,500 yen or rent a stand-up paddleboard and SUP around for 3,000 yen. Tours include a trip to the sandbank.

Yoron is also a great place to enjoy the starry skies. I was told by friends that Yoron Station is a great spot to take photos. It is not an actual train station, just a setting for photo ops, but it is certainly a great location.

The station’s sign says, “Milky Way Galaxy Main Line,” and it is very true. At 8 p.m. a night sky full of stars and the sweep of the Milky Way were clearly visible. If you plan on making a successful photo, bring a tripod, and plan your trip around the new moon.

One of the highest points of my Yoron stay was keihan, or chicken rice, a popular Amami regional dish that I had heard is super delicious and healthy.

I topped my white steamed rice with shredded chicken, eggs, shitake mushroom, scallions, green chili pepper paste with yuzu and nori seaweed, then over it poured the chicken broth.

I was so excited to eat my first bite. It was absolutely delightful. I recommend a trip to the Yoronto Village Tara hotel restaurant for its keihan, 1,300 yen, for lunch.

I went there twice during my stay and thinking about the meal makes my mouth water. We requested an extra bowl of rice and broth, too.

Camp sites are available near Oganeku Beach for 500 yen per person or rent a cottage for 5,000 yen a night.

Most of the “minshuku” lodges are available from 5,500 yen with breakfast. The ferry fare is heavily discounted till further notice, so take advantage and see the breathtaking Yoron blues!

DIRECTIONS: Yoron Island is only 14 miles north of Okinawa, about a two-hour ride by ferry from Motobu Port

TIMES: You can visit the island year-round

INFORMATION: Online: yorontou.info/en. Ferry information can be found online at www.aline-ferry.com or by calling 099-226-4141