‘The most dangerous road in the world’ Dagenhart had to ride the motorcycle back to the Marines’ home base near Fallujah. (Sandra Jontz / S&S)

Dagenhart had to ride the motorcycle back to the Marines’ home base near Fallujah. (Sandra Jontz / S&S) 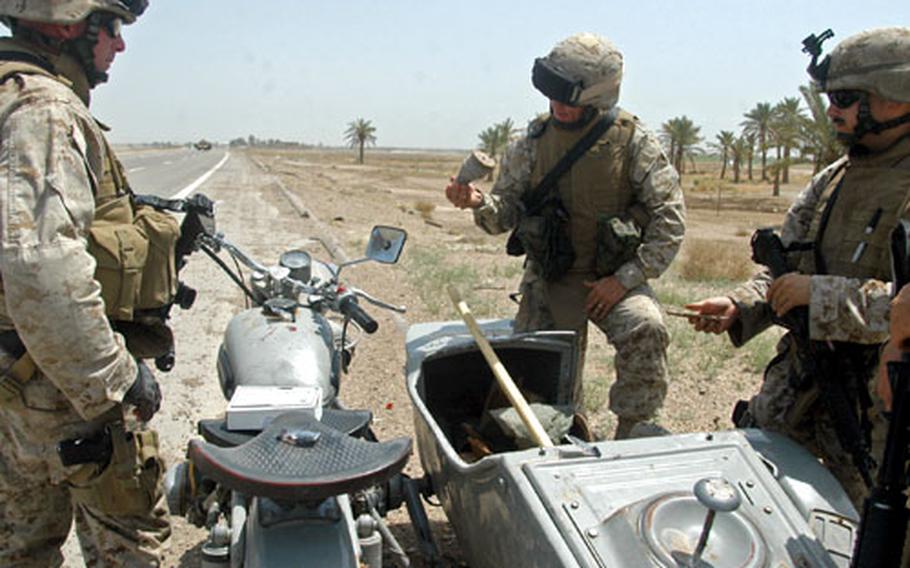 Gunnery Sgt. Jeff Dagenhart, leader of 2nd Platoon, Weapons Company of the 3rd Battalion, 8th Marine Regiment, stands with other Marines as they inspect a motorcycle seized from a suspected insurgent a few miles outside of Fallujah, Iraq. (Sandra Jontz / S&S) “Wanna see something scary?” Dagenhart, left, asked Capt. Ed Nevgloski, commanding officer of Weapons Company, as they look at a piece of metallic mine found in the sidecar of the motorcycle. (Sandra Jontz / S&S) 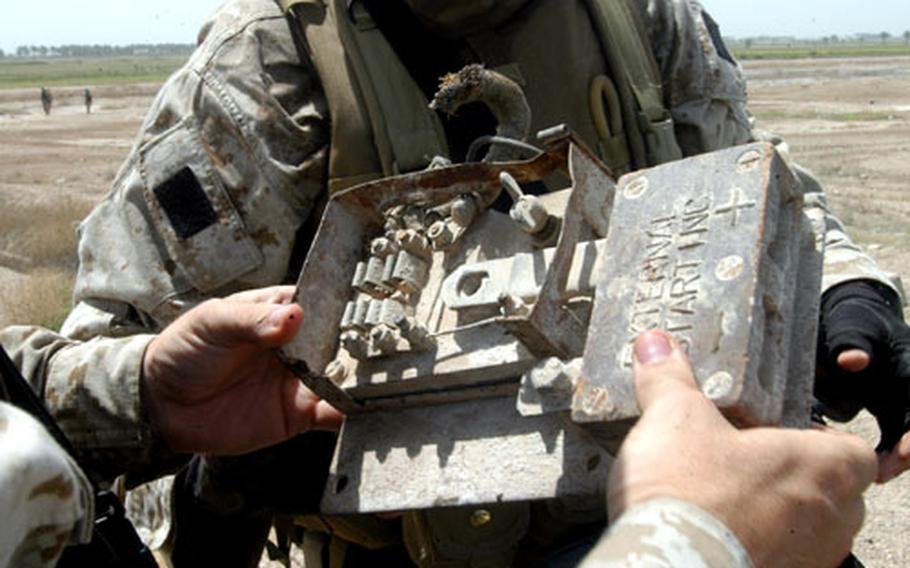 A piece of electronic equipment was among the many possible bomb-making materials found in the sidecar. (Sandra Jontz / S&S)

CAMP FALLUJAH, Iraq &#8212; Gunnery Sgt. Jeff Dagenhart&#8217;s sixth sense kicked into overdrive Sunday while he was patrolling a major Iraqi highway that some Marines have dubbed &#8220;the most dangerous road in the world.&#8221;

He liked nothing about the young man perched on a motorcycle in the median of Main Service Road Mobile, a thoroughfare between Iraq and Jordan, of which the 25 miles between Baghdad and Fallujah is patrolled day and night by Marines of Weapons Company, 3rd Battalion, 8th Marine Regiment.

Inside the motorcycle&#8217;s sidecar, the Marines found a shovel, several canisters, sharp metal pieces, a slice of a metallic mine, an empty sandbag and an empty beer can, among other things.

Using a field kit, Dagenhart tested the man and the motorcycle for gunshot residue, getting a positive reading from the suspect&#8217;s hands, the handle of a shovel and various areas on the motorcycle, including the handle bars, brake and gas tank, Dagenhart reported to Capt. Ed Nevgloski, commanding officer of 3-8&#8217;s Weapons Company.

Marines detained the suspect, cuffing his hands behind his back and taking him to a temporary detention facility. The MAM, or what the military calls &#8220;military-aged man&#8221; didn&#8217;t struggle as Marines led him away from the area.

Dagenhart rode the motorcycle back to the unit&#8217;s home base.

Day and night, Weapons Company links up with U.S.-trained Iraqi Security Forces to patrol the two major roadways that run through their sector, which they&#8217;ve named MSR Mobile and MSR Michigan.

The Marines have encountered dozens and dozens of roadside bombs and car bombs along the routes, Nevgloski said.

On Sunday, Nevgloski beamed with pride.