The making of a Leica 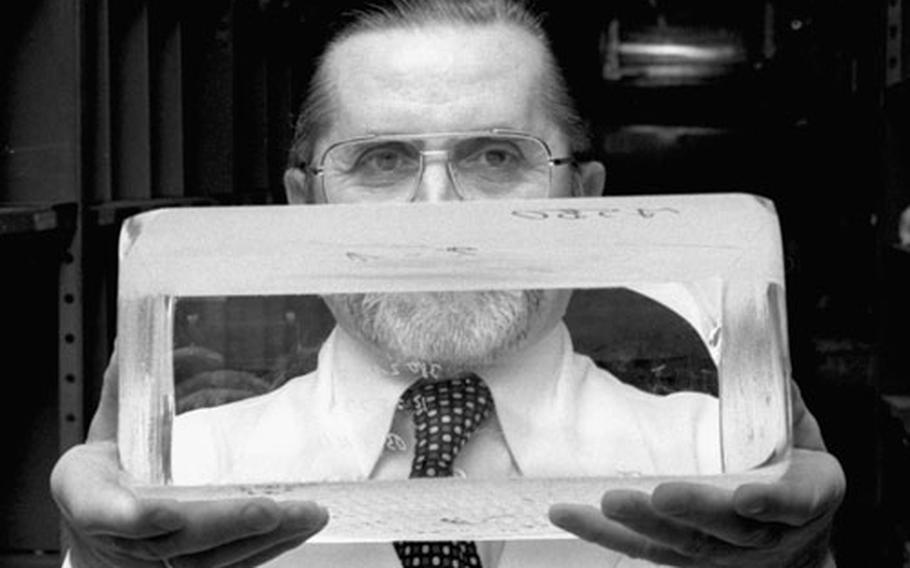 Buy Photo
A 50-pound piece of glass, ready to be turned into precision lenses at the Leitz factory in 1979. (Gus Schuettler/Stars and Stripes)

LEICA. To many, the word is synonymous with quality, precision, innovation and a four-digit price tag. It’s not such a sacred cow to Klaus Eichler.

"The camera for us is a byproduct," said Eichler, a spokesman for the Ernst Leitz optical firm of Wetzlar, Germany, which makes Leica.

Eichler, who describes his job as a "troubleshooter" for Leitz, said the firm has a catalog of 2,000 products and another 6,000 which are available by special order.

Buy Photo
A 50-pound piece of glass, ready to be turned into precision lenses at the Leitz factory in 1979. (Gus Schuettler/Stars and Stripes) 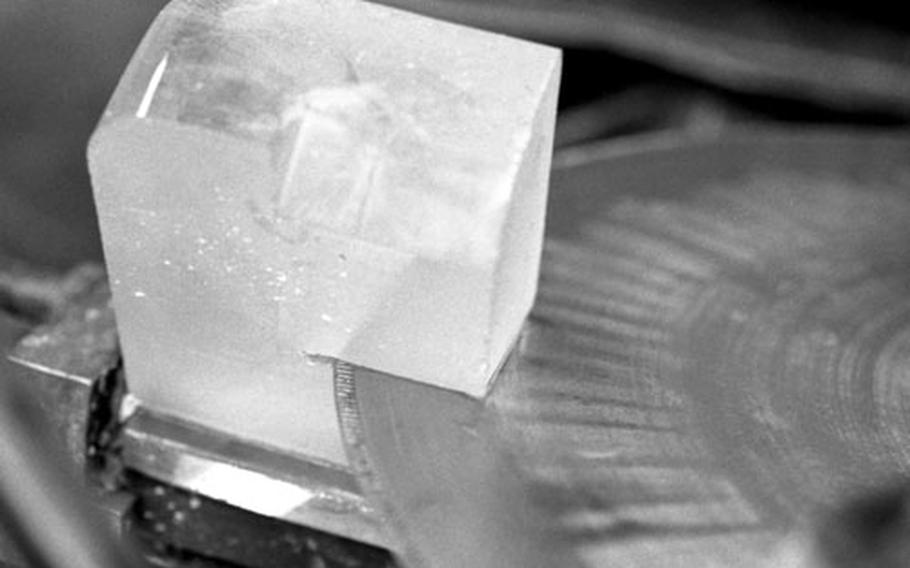 Buy Photo
A diamond-enforced blade cuts into a block of glass. (Gus Schuettler/Stars and Stripes) 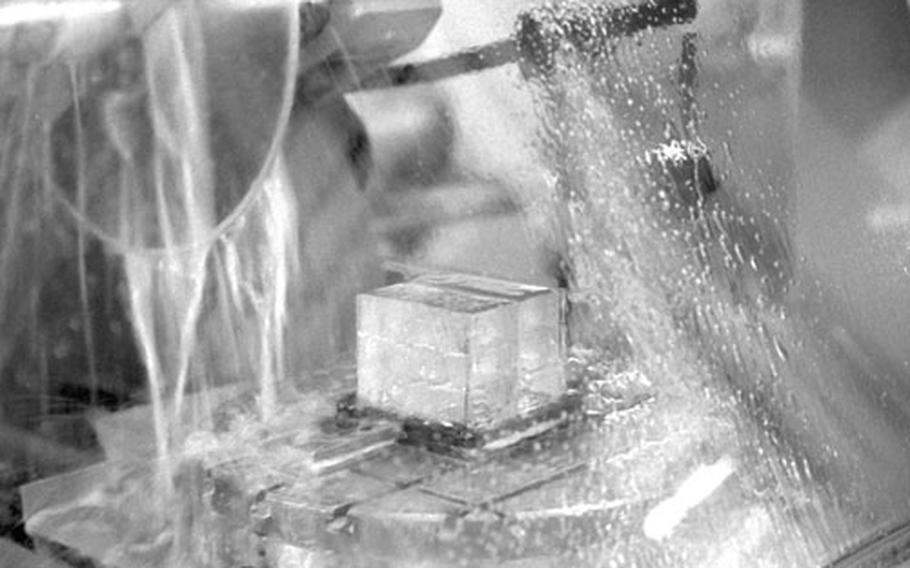 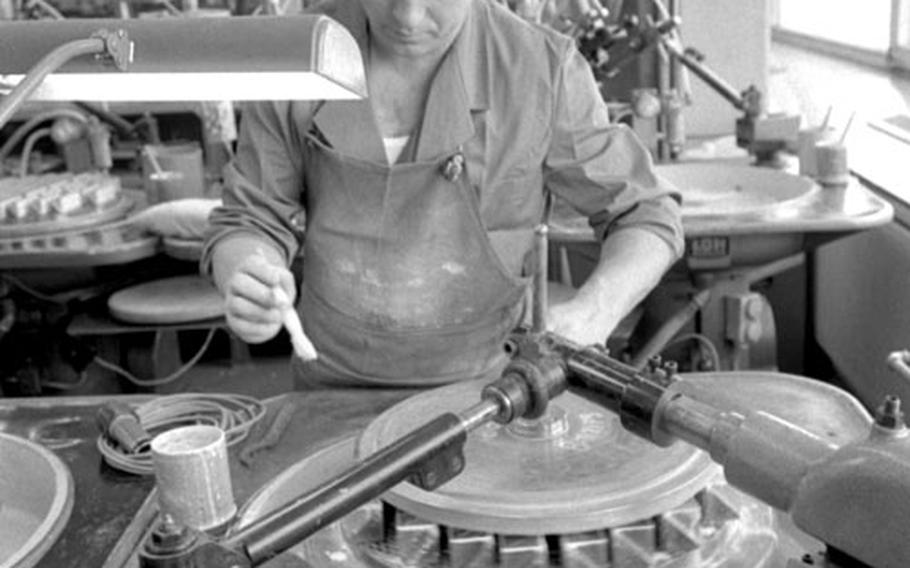 Buy Photo
A worker on the job at the Leitz factory. (Gus Schuettler/Stars and Stripes) 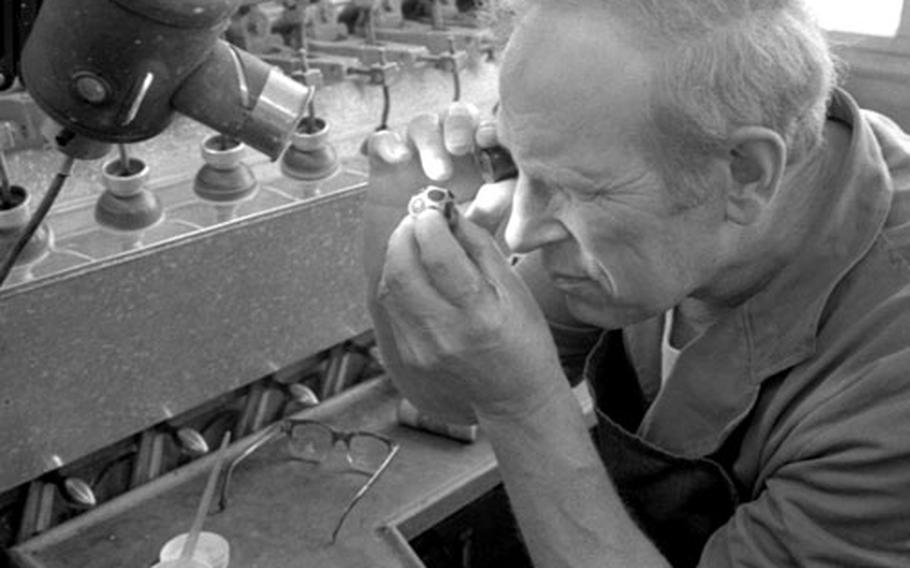 Buy Photo
Despite automation, human judgment is still a valuable tool in the cutting and polishing of lenses. (Gus Schuettler/Stars and Stripes)

"We want to bring out a product only when it can be a perfect product," Eichler said. Leica — an acronym of "Leitz camera" — is the nearest thing to perfection in the world of cameras, according to Eichler.

"We're not at all opposed to the Japanese (camera) product. Everyone today knows how to photograph due to the red light, green light (automatic) method," he said. "More and more people are progressing through the ranks and files of photography and are reaching up to Leica.

"At the present time we are a little bit above 50 percent (in profits) in the photo part of the business," Eichler said. Photo products formerly contributed under 50 percent of Leitz income.

The firm phased out production of 35mm cameras in Germany in 1975 and 1976 because of high labor costs. "The same reason that Volkswagen went to the U.S.," Eichler said. Some lenses, however, are still made in Germany.

A factory in Canada was opened in 1952 and employs about 500 people. Leica's rangefinder camera bodies, some lenses and special optical products requested by NATO nations are made there.

Portugal, another NATO country, is where Leica single-lens reflex camera bodies, binoculars and small microscope stands are made. About 350 people work in the Portuguese factory, which opened in 1973.

Selling prices for both rangefinder and reflex models start at around 2,000 Deutsche marks (about $1,065) in German stores.

Well-heeled Leica lovers can invest another 2,000 marks if they buy the complete range of accessories and lenses in either model.

"The only thing the customer sees in the window is the difference in price," said Karl-Hans Welcker, photo product manager. "We are the only company in the world that offers a complete photographic system."

"We are not selling gimmicks," Weicker added; "we are selling pictures."

Despite (possibly because of) the high cost of Leica cameras, Eichler said, "We have a fixed clientele."

Quality and precision are words that keep cropping up at Leitz.

"About 83 percent of our work is by hand. We employ about 50,000 gauges for testing" in making lenses which range in size from one-twelfth of an inch to one foot in diameter, said Eichler, who has worked for Leitz since graduating from college 28 years ago. He said the firm uses 400 types of glass in making its optics.

Leica is also connected to the space program. "Leica 50mm standard Summicrons are used in satellites for orientation of gyroscopes," said Eichler.

The firm has used samples of moon rock in its glass research. "The moment we can synthesize glass at will, we will cut the cost of lenses by 40 percent," he said.

G&uuml;nther Wangorsch, public relations officer and editor of two publications for the firm, said the Leica was not designed as a camera.

In an address during the 10th anniversary meeting of the Leica Historical Society of America, Wangorsch said the camera was developed by Leitz craftsman Oskar Barnack in 1911 as a light meter for 35mm movie cameras. Ernst Leitz II encouraged development of the camera, which could be carried in his pocket on business trips.

Against the advice of most experts at the firm, Leitz decided in 1924 to produce the camera and registered Leica as a trademark. In 1925, the factory began its first production run of the Leica and showed the camera at the Leipzig trade fair.

Leitz employs 4,000 people and operates seven factories in Germany — five in Wetzlar and one each in Weilburg and Rastatt.

The firm resurrected its basic photography course in April.

"We're going to do it on a trial basis in German first," said Eichler. If successful, the 420-mark (about $225), four-day course (which includes full room and board) will be offered in English, French and Spanish.

WHY IS THE Leica so expensive?

Leitz uses top quality raw materials to begin with, according to a company spokesman. For example, Leica lenses are made from "rare earth salts."

Rare earth salts are costly because they are relatively scarce and hard to isolate. These salts, the spokesman said, require a platinum-lined crucible because of their very high melting points &mdash; up to 1,800 degrees Centigrade. Platinum is among the most expensive metals.

While other camera manufacturers use synthetic materials for some moving and interlocking parts in the lens element, Leica sticks with metals, such as aluminum and brass, because company policy is: Don't sacrifice quality for lower prices, he said.

Leica lenses also receive a special coating which is difficult to apply evenly and correctly. Lenses which don't meet specifications are discarded, resulting in a loss of time and materials which add up to money, he continued.

The spokesman said the materials and procedures result in lenses with higher refractive powers.

In laymen's terms, lenses with higher refractive powers bend light rays passing through into sharper images. He said Leitz lenses make sharper images in three ways &mdash; on film when the picture is taken, on photographic paper when the film is placed in an enlarger and on screens when slides are shown on a projector.

The Leitz spokesman said labor is another factor which pushes up the cost. German workers are among the highest paid in the world. In lieu of automated methods, much of Leica workmanship and quality control is done by hand or eye.