The making of a demonstration pilot 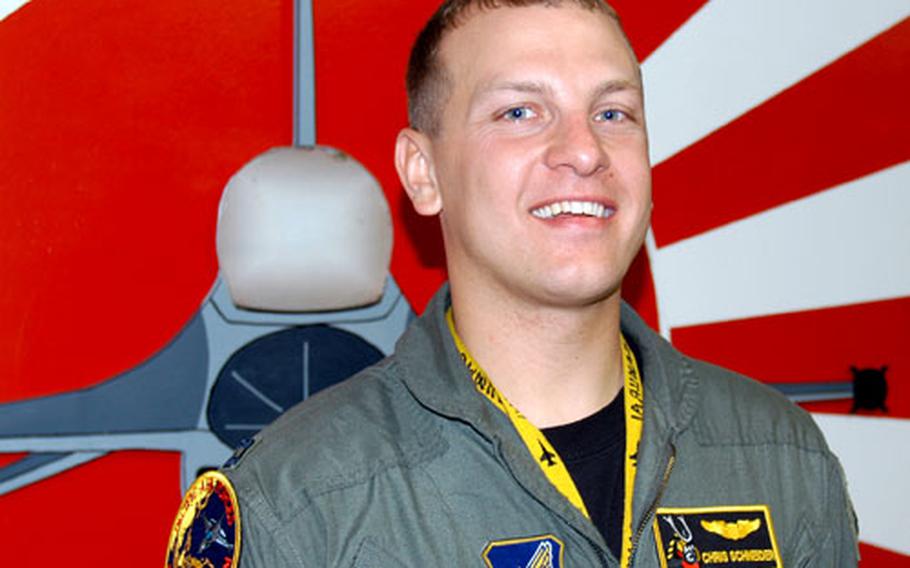 Capt. Chris Schneider, of the 14th Fighter Squadron at Misawa Air Base, Japan, has been certified as the Pacific Air Forces demonstration team pilot. The team, based at Misawa, performs 10 to 15 shows a year throughout Japan and the Pacific region. (Jennifer H. Svan / S&S)

After three months and 17 sorties, progressing from a student in the back seat of an F-16 D-model to flying solo, Schneider passed his last test on Thursday: performing 11 maneuvers in front of Lt. Gen. Bruce Wright, 5th Air Force and U.S. Forces Japan commander.

The team typically performs 10 to 15 shows a year throughout the Pacific, including in Singapore, Australia, South Korea, Malaysia, Guam, Alaska, Hawaii and throughout Japan. The pilot and maintainers typically rotate every two years and compete for the slots through an interview process, letters of recommendation and job-performance evaluations.

Schneider gave it a shot because &#8220;I love the Air Force and getting the opportunity to just go out and represent PACAF &#8212; even the United States Air Force &#8212; all over the Pacific, I thought was an awesome idea,&#8221; he said.

It&#8217;s high-flying acrobatics and public relations rolled into one. &#8220;The most intimidating part is you&#8217;re representing everyone in PACAF, so you want to be as perfect as you can,&#8221; he said.

It also means extra duty. Unlike the demonstration teams in the States, which put on about 40 shows a year, working on the PACAF team is collateral duty.

The maintainers pack out their own gear and equipment, putting in 12-plus hours the day before an air show ensuring the jet is shiny clean and ready to roll.

Misawa has hosted the PACAF demonstration team since the late 1990s, after it was moved from Hickam Air Force Base, Hawaii.

Schneider has to practice about every 15 days to keep his certification current.

The team is scheduled to perform Sept. 4 at the Misawa Air Festival.