The long wait is over as Aviano's 31,000-square-foot rec center opens 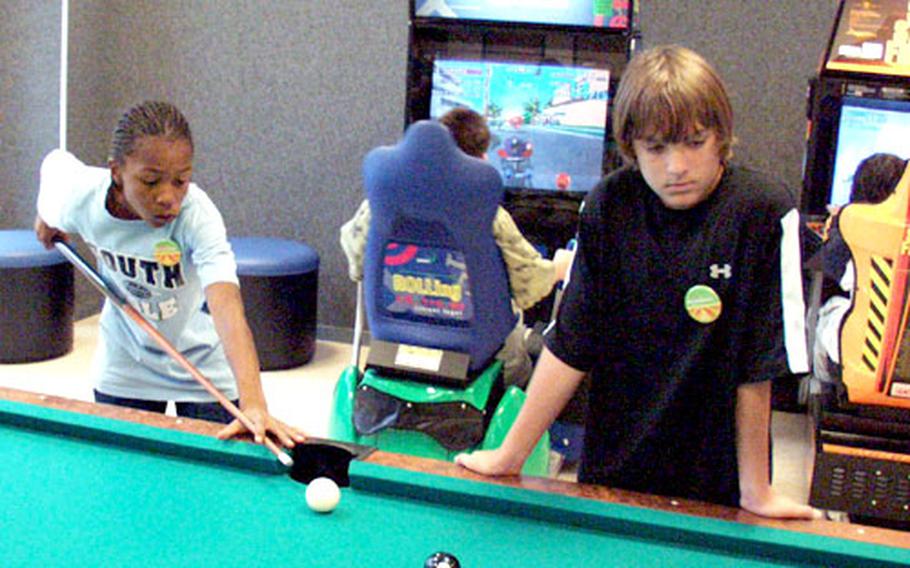 Marcel Tibbs lines up a shot on the pool table while Phillip Brady watches Thursday shortly after the ribbon cutting for the $7.4 million youth center at Aviano Air Base. The 31,000-square-foot facility is now the hub of out-of-school activities for youth on base. (Kent Harris / S&S)

Marcel Tibbs lines up a shot on the pool table while Phillip Brady watches Thursday shortly after the ribbon cutting for the $7.4 million youth center at Aviano Air Base. The 31,000-square-foot facility is now the hub of out-of-school activities for youth on base. (Kent Harris / S&S) It took three contractors and more than four years to complete, but Aviano Air Base now sports the newest — and one of the largest — youth centers in the Air Force. (Kent Harris / S&S)

AVIANO AIR BASE, Italy &#8212; It&#8217;s been at least a decade since children and teenagers have had a single spot on base large enough for everyone to hang out.

The $7.5 million facility, on the site of the former commissary in Area 1, took three contractors and more than four years to complete. Bilfinger and Berger, a construction firm from Kaiserslautern, Germany, completed the project after two other contractors defaulted.

Dave LaBonte, the youth center director, said the wait was worth it. He said the 20 staff members are probably as excited as the kids.

The air wing activated in Aviano in April 1994. Only a few hundred Americans had been stationed on the base before then and there weren&#8217;t enough facilities to support the additional airmen and their families. So the massive Aviano 2000 construction project, designed to construct facilities for them to live, work, shop and play, was born. The youth center is the latest in the $550 million program to open.

Several other projects, including the medical center nearby, are under construction.

Col. Roberto Sardo, the new Italian base commander, told those gathered Thursday at the ribbon-cutting that he hoped the new center would serve the American youth well. He also said he hoped it would be a center for interaction between Americans and their Italian counterparts.

Downstairs there are six activity rooms for elementary-school-age children, a games room, a kitchen and a room for dance lessons, including ballet.

Upstairs there&#8217;s a larger area for dance practice, music rooms, another area for games and a teen center.

&#8220;We can do homework and watch TV,&#8221; Shameelah Chambliss, also 12, said while pointing out a lounge area with a big-screen television that adjoins a room filled with computers for studying.