The long wait: Few flights from Iraq to Germany 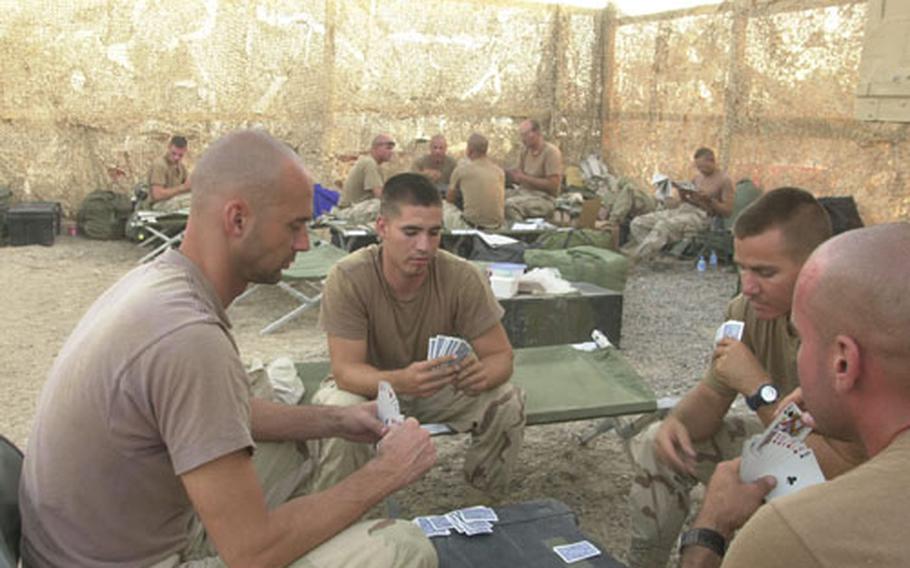 Staff Sgt. Kris Gable, back to camera, waits to play the eight of clubs as Master Sgt. Daniel Gilstrap, left, Sgt. Eduardo Moya, center, and Staff Sgt. Michael Morehead watch the cards going down during a game of hearts. The four noncommissioned officers from the 249th Engineers Battalion in Heidelberg, passed the days waiting to get out of Baghdad International Airport with endless rounds of card games. (Terry Boyd / S&S)

Soldiers trying to fly out of Baghdad to Germany need orders, military IDs &#8230; and a lot of patience.

What Air Force passenger terminal officials in Iraq often don&#8217;t volunteer is that traveling direct to Germany from Baghdad International Airport is usually not the way to go.

In early October, dozens of Germany-based soldiers were finding out the hard way, sitting or sleeping on cots outside the Baghdad passenger terminal, wondering when they&#8217;d get out of the dirt and 100-degree heat and onto a plane. Inside the air terminal&#8217;s air-conditioned tent, more than 100 watched television or napped in chairs.

&#8220;Four days. That&#8217;s what I&#8217;m hoping for,&#8221; said Staff Sgt. Michael Whitehead, who played cards with three other soldiers from his unit, the Heidelberg, Germany-based 249th Engineer Battalion. Whitehead and the unit&#8217;s 15 other soldiers already had been waiting two days in an improvised camp in a corner of the terminal grounds.

Spc. Sean Fitzgerald had been waiting four days to get the 1st Armored Division&#8217;s 1st Brigade headquarters back in Friedberg, Germany. Another 1st AD soldier on emergency leave, who asked his name not be used, said he&#8217;d been waiting a full week for a seat to either Ramstein Air Base in south-central Germany, or Rhein-Main Air Base in Frankfurt. &#8220;I don&#8217;t care which one. If I can just get to Germany, I&#8217;ll walk home,&#8221; he said.

It turns out, they were wasting their time.

Soldiers going to Iraq should expect to fly from either Rhein-Main or Ramstein to Kuwait, Kuwait to Baghdad, then back to Germany via Kuwait, said Col. C.J. Evans, AMC director of global channel operations at Scott.

Other direct flights out of Baghdad are emergency medical evacuations, and medical crews have the final say on whether or not passengers are allowed on, Evans said. Moreover, medical equipment may take up cabin space to the point there simply isn&#8217;t space for passengers to bring on luggage, he added.

Overall, it takes on average a couple of days to move units out of Iraq, according to Brig. Gen. Paul Selva, commander, Tanker Airlift Control Center at Scott.

It can take a lot longer for soldiers traveling independent of their units, and for civilians flying space-available or even space-required, Selva said. Individuals flying space available are the lowest priority, Selva said.

Showing up early in hopes of getting out early is a particularly bad idea, Selva said. He knows it&#8217;s frustrating for soldiers to see planes flying in and out of Baghdad without being able to get on them, he said. But they can&#8217;t know whether the planes are leaving full of passengers and cargo going out of Iraq, or are flying off to follow-on missions somewhere else in Iraq or in Southeast Asia, Selva said.

To get to the airport early &#8220;literally is gambling on the outcome. Gambling with time. You&#8217;re literally waiting on a flight that may or may not come,&#8221; he said.

From Oct. 6 through Oct. 10, for example, individual travelers at the airport were stuck for days, during which there were periods up to 36 hours with no direct flights to Germany. At the same time, more unattached soldiers arrived, filling the area around the AMC. After one 12-hour stretch without a flight, 14 passengers were allowed to board a 4:30 a.m. medical evacuation flight, but were not allowed to bring any luggage other than a carry-on.

Several subsequent flights to Germany were scrubbed, and one was designated for &#8220;Special Forces,&#8221; with no other passengers allowed on.

Several personnel at the Baghdad terminal said delays were due to the Army&#8217;s then-new midtour rest and relaxation program, something AMC officials say is not accurate. The leave program is totally separate &#8212; C-130s and leased commercial craft fly troops to the United States and Germany from Kuwait &#8212; with no effect on flights in and out of Baghdad, according to Selva.

There is some confusion along the complicated, 9,000-mile-long chain of command between the United States and Iraq, Evans said. He promised to direct noncommissioned officers running the Baghdad passenger terminal to give travelers a complete briefing about the proper way to get to Germany.

This could take a while

Soldiers trying to get out of Iraq can sit for days while planes leave Baghdad International Airport without them.

&#8226; The highest priority flights are designated &#8220;1 Alpha 1 JCS,&#8221; for Joint Chiefs of Staff. In other words, a presidential overseas visit. In the event of a presidential trip, Air Mobility Command officials may take planes from some routes to supplement for security, communications and other needs.

&#8226; The second-highest priority is medical evacuation flights. Air Force officials may send a plane for just one wounded soldier if that&#8217;s what it takes.

At best, emergency medical evacuation flights will have only 25 to 30 seats. Medevac flights may provide a chance opportunity to go directly to Germany from Iraq, &#8220;but they should not be the preferred way,&#8221; said Col. C. J. Evans, AMC director of global channel operations at Scott.

&#8226; In a typical week, there may be about 18 missions from Germany into Baghdad and back. Roughly half fly from Ramstein, half from Rhein-Main. Most flights use C-17Ds and C-141s.