The Lees: Ships passing in the night 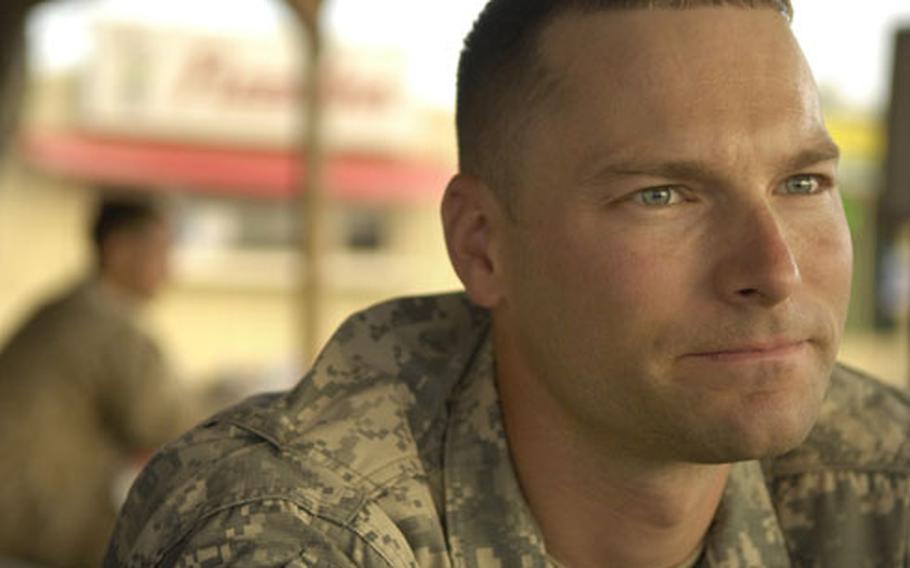 Capt. Matt Lee recalls his experiences in Iraq in an interview Oct. 24 during his stopover at Camp Virginia in Kuwait. In Kuwait, Lee was able to steal away a moment with his wife, Capt. Kacie Lee. She had deployed there a day before he flew back to Fort Drum, N.Y. (Ben Bloker/Stars and Stripes)

Capt. Matt Lee recalls his experiences in Iraq in an interview Oct. 24 during his stopover at Camp Virginia in Kuwait. In Kuwait, Lee was able to steal away a moment with his wife, Capt. Kacie Lee. She had deployed there a day before he flew back to Fort Drum, N.Y. (Ben Bloker/Stars and Stripes) Matt and Kacie Lee shared 20 minutes on his way out of Iraq — and her way in. ()

Capt. Matt Lee and his wife got 20 minutes together in the splendor of the Kuwait desert. He was on his way out of Iraq after a 14-month tour. She was on her way in for a year.

It was 3 a.m. Capt. Kacie Lee was asleep, on a cot in a Quonset hut full of other people at Camp Buehring. Matt had gotten a ride from Camp Virginia. He tapped her on the shoulder. She opened her eyes.

They kissed. They talked for a few minutes. They went outside looking for a little privacy. There wasn&rsquo;t any. And then he had to go.

That&rsquo;s how it&rsquo;s been ever since they&rsquo;ve been a couple. A year deployed separately to Iraq. A year in South Korea on separate, unaccompanied tours, seeing each other on weekends. A year &mdash; living together &mdash; at Fort Drum, N.Y. His deployment with the Triple Deuce. Two weeks in Belize during his R&R. Her latest deployment.

The Army has long touted the importance of family life and support for its soldiers. But for some two-soldier couples like the Lees, the past few years have changed the concept of marriage &mdash; from a life together to a very long, long-distance relationship.

"I guess when you look at it like that, we haven&rsquo;t lived together much," Lee said. On the upside, he said, "We&rsquo;re always newlyweds. It&rsquo;s always very exciting."

Except when it&rsquo;s not.

Lee left the welcome-home ceremony at Fort Drum and went directly to bed in his chilly, empty house.

"I slept through two alarms, 10 phone calls and numerous rings of the doorbell," he said.

The phone? That was his parents, wondering why he wasn&rsquo;t there to pick them up at the Syracuse airport. When he failed to answer the phone, they rented a car and drove to Watertown. That was them at the door, too.

When he finally woke up, he turned on his computer and sent five e-mails to his wife. In e-mail No. 5, he tried to persuade her to pierce her ears, so he could buy her earrings. All the rest had to do with how much he missed her.

Matt had requested to be able to stay in Iraq longer to be with his wife or at least stay at Fort Drum. The Army said no to both.

"So, yeah, I guess I&rsquo;m a bit angry right now," Matt said in an e-mail. "I&rsquo;m not going to lie. It&rsquo;s tough right now and very lonely. &hellip; We have a lot of &lsquo;down time&rsquo; giving me almost too much time to think."

But he&rsquo;s made no decisions about his military future. That&rsquo;s partly because, Matt said, decisions made during times of heightened emotions may not be the best ones.

A year ago, both he and Kacie took the $35,000 the Army was offering to retain captains, and they are obligated for another two years.

According to a report from the Army War College at Carlisle Barracks, Pa., that made them part of the 68 percent of captains who stayed in because of the incentives program. The Army had expected to retain 80 percent, the March report said.

The Lees would have stayed in anyway, Matt said. They have put their time apart into perspective.

"This is only temporary, and there are those a lot worse off than us, and make no mistake &mdash; this is the path we chose," Matt wrote.

"As far as our relationship, it always seems to strengthen when we&rsquo;re apart. I&rsquo;m very lucky, as Kacie has always been extremely loyal to me. I know other soldiers have &lsquo;hit on her&rsquo; in the past and will during her deployment now, but I know I don&rsquo;t have anything to worry about.

"She&rsquo;s one of the strongest-willed people I know. I don&rsquo;t ever worry about us breaking up. I don&rsquo;t see anything coming up we can&rsquo;t work through," Matt said.

This spring, Matt is to go to the National Training Center at Fort Irwin, Calif. He expects to be busy in the next few months packing their things and selling the house. When Kacie finishes her deployment, she&rsquo;ll join him at Fort Irwin, and they&rsquo;ll go from there.

"We&rsquo;ve talked about kids and will most likely have one when she gets out to [Fort Irwin]," Matt said. "But neither of us are dead set on getting out quite yet."

"It&rsquo;s a coin toss who will get out, but I imagine after our time at NTC is done (especially if we have a child at that point), one of us will be getting out," he said.

Matt sometimes thinks about the first sergeant on his first Iraq deployment, who was deciding whether to retire or attend the Sergeants Major Academy. He chose retirement.

The first sergeant and his wife moved into a new house in the woods of Arkansas, next to a fishing pond.

"I&rsquo;d never seen him &mdash; or anyone &mdash; so happy," Matt said.