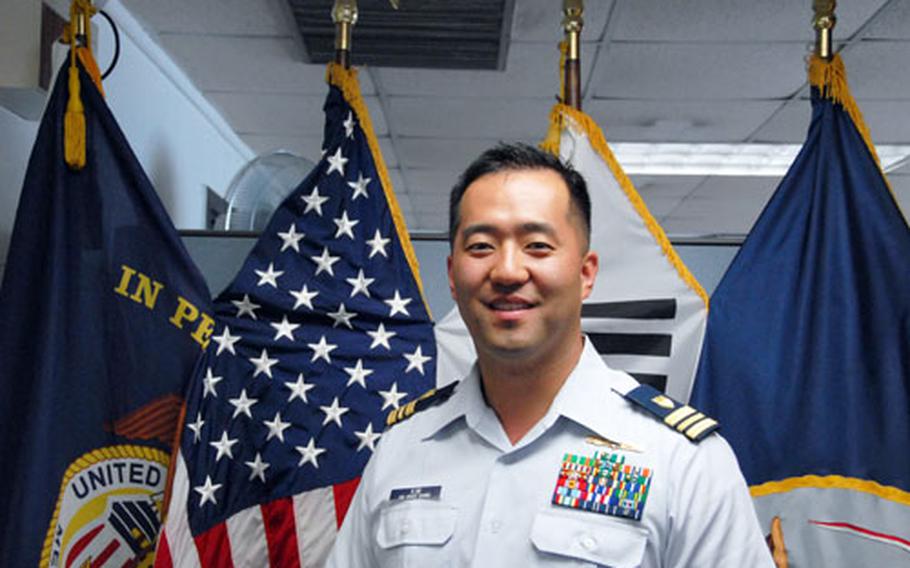 Lt. Cmdr. Scott Kim poses for a photo at his office in the U.S. Embassy annex in Seoul. (Ashley Rowland/Stars and Stripes)

Kim works in an air-conditioned cubicle inside the U.S. Embassy annex building in Seoul. The nearest coast is about a 90-minute drive, and the nearest boat is a replica of an ancient Korean battleship on display in a museum around the corner.

Kim&#8217;s job is unusual in another way: The 37-year-old, who was born in Seoul, is the only U.S. Coast Guardsman stationed in South Korea.

"There&#8217;s that camaraderie that I feel with the military, especially the Navy and CNFK (Commander Naval Forces Korea)," he said. "But I feel a little bit lonely because there are no other Coasties out here."

As a liaison officer, Kim works with South Korea and other countries on port security here and around the world. He&#8217;s one of about 15 Coast Guardsmen stationed across the Pacific.

Before coming to South Korea, Kim was stationed at Yokota Air Base in Japan as a liaison officer. For a Coast Guardsman not used to living on a large Air Force base, moving to Yokota was more of a culture shock than moving to Japan.

"Just getting used to the military jargon and all the Air Force-related stuff," he said.

Kim moved to Philadelphia with his family when he was 11 and speaks English as fluently as a native speaker. He speaks junior-high level Korean and said South Koreans are surprised when he begins talking.

Moving back to Seoul was like moving home for Kim and his wife, who also emigrated from South Korea to the United States. Both have family in the city, and Kim&#8217;s grandmother &#8212; whom he was close to as a child &#8212; lives five minutes from U.S. Army Garrison-Yongsan.

He said there are advantages to working alone, like having more flexible hours and no supervisor. Even though the U.S. Navy community at Yongsan has "adopted" him and he has the help of the embassy staff, there are downsides, though, like having to figure out some things and problems on his own.

He said growing up in Seoul and speaking Korean helps him at work. He can understand the points of view of both countries and said South Koreans open up to him because he speaks their language.

"I think, because of that, they may be able to share more of what their worries are, what they&#8217;re going through. They think of me as one of their own, and they&#8217;ll confide in me a little bit more," he said.

Lt. Cmdr. Scott Kim works at his office in the U.S. Embassy annex in Seoul.