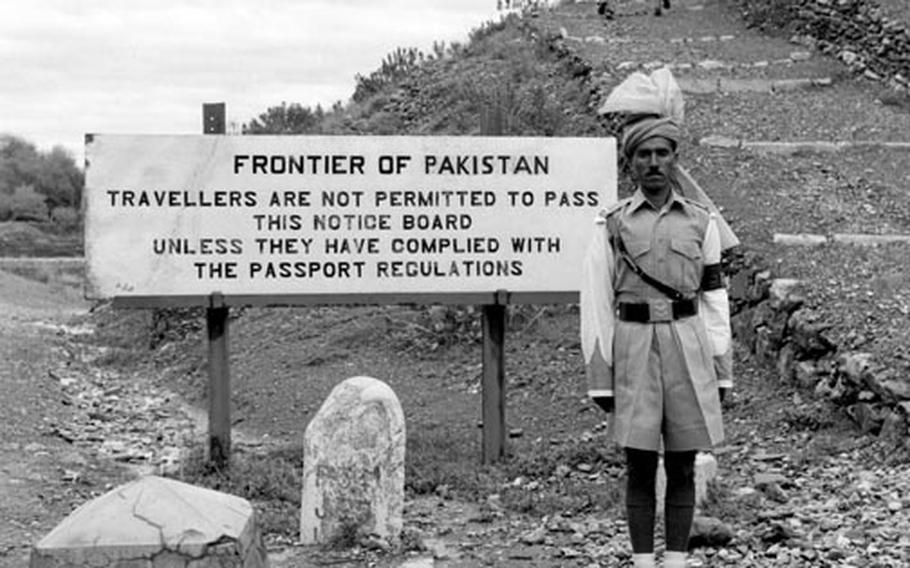 Buy Photo
A militiaman from the Khyber Rifles stands guard at the Khyber Pass in 1958. (Ted Rohde/Stars and Stripes)

Buy Photo
A militiaman from the Khyber Rifles stands guard at the Khyber Pass in 1958. (Ted Rohde/Stars and Stripes) Buy Photo
A Khyber Rifles patrol moves out along the frontier. (Ted Rohde/Stars and Stripes) Buy Photo
Troops shape up in front of their barracks for an inspection. (Ted Rohde/Stars and Stripes) 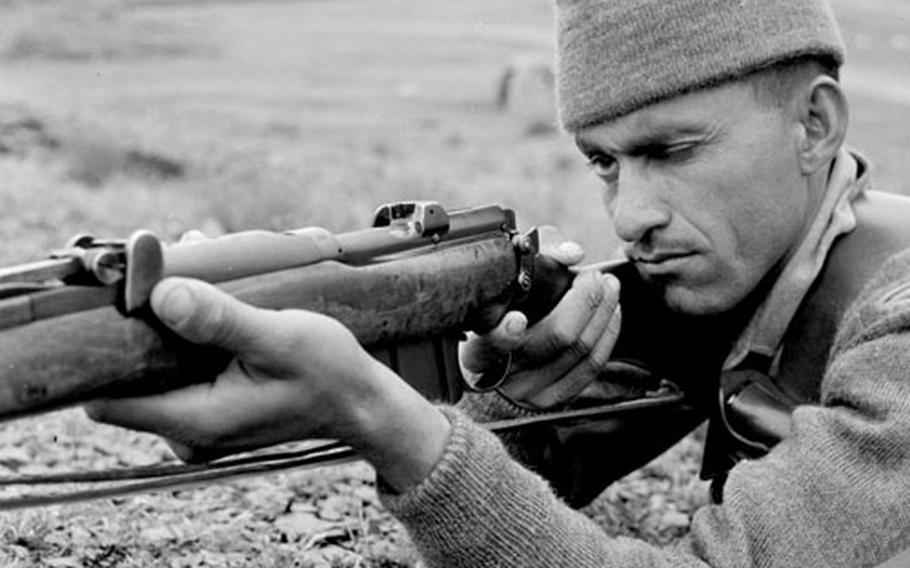 Buy Photo
All te tribal soldiers were noted for their marksmanship. (Ted Rohde/Stars and Stripes) Buy Photo
The Khyber Rifles at the Khyber Pass in 1958. (Ted Rohde/Stars and Stripes)

"WE ARE AT THE end of the line," said Lt Col Mohd Sherin Khan, commanding officer of the Khyber Rifles, "But we meet more VIPs here than anywhere else."

To prove his point he opened the almost-legendary unit's guest book and displayed page after page of famous and well-known names.

Kipling made the Khyber Pass immortal, but the militiamen who guard this sensitive route between Afghanistan and Pakistan speak for themselves.

To know the Khyber Rifles it is necessary to know the country they patrol and the people who inhabit the rugged area of Pakistan's Northwest frontier. To begin with, the former Northwest Frontier Province is not a political subdivision of Pakistan in the sense that other provinces are.

One writer has described the area as a "sort of Neapolitan ice cream." Three layers, each with a distinctive political color, yet all containing the same general ingredients.

Furthermost from the Afghan border is the Pakistan-administered area, formerly Northwest Frontier Province, peopled by Pathans. Next comes an independent tribal region, or "buffer" zone, also populated by Pathans, and administered by a Political Agency. On the Afghan side of the border there are more independent, invincibly uncontrolled Pathan Tribe.

The Khyber Rifles, like other Scout units in the "buffer" zone are the "army" of the Political Agency, and they too are Pathans, recruited from the various tribes that inhabit the Pennsylvania-size area.

The history of Khyber Pass has been one of political instability and of traditional invasion by conquerors headed into India. The first British outpost in the area was built in 1839 and from the outset trouble prevailed.

The fanatical Moslem tribesmen would not tolerate foreign domination, and the fierce Afridis, a sub-tribe of Pathans, refused to allow the "infidel" soldiers in the Khyber Pass to rest in peace without personally laying them to rest.

As a result of continued troubles between the tribesmen and the occupying soldiers the decision was made to police the area with Khassadars, locally-recruited riflemen who sat on hill tops near their villages with the task of' shooting at excitable friends who aspired to interfere with convoys and caravans.

Other tribesmen were reluctant to shoot at the Khassadars for fear of becoming engaged in a blood feud, and this same fear is a part of the key to the Khyber Rifles success in the touchy area today.

Originally called the Khyber Jazalchis (term for locally-made rifle), the Khybers were raised by a British officer, Capt Gais Ford, as an independent unit in 1878. Ten years later they were annexed to the Frontier Corps as a regular part of the uniformed standing force of the Political Agency.

Legends and facts of the Frontier Corps are hard to distinguish, but the tribal militia's reputation has spread far and wide, accounting for the numerous VIPs who insist on visiting Khyber Pass and its guardians anytime they pass through this part of the world.

Fundamentally the lightly-armed, fast-moving riflemen's job is guarding the pass and enforcing the tribal agencies' administration in the area. These militiamen, who come from an area where the land is poor and marksmanship excellent, can outwalk their weight in camels.

The troop is organized into wings, with a headquarters wing at Landi Kotal near the Afghan border. Other wings of approximately 700 rifles, man Beau Geste-like fortresses at each end of the pass, plus sprawling Shagai Fort near the center of the 30-mile-long defile. In an emergency Shagai can house the whole contingent.

Occasional gasht — patrols with no particular purpose except to show the uniform — are occasionally ordered into the surrounding countryside. On these prowling junkets the Khybers cover enormous distances at high speed. Each man carries his loaded weapon, a supply of ammunition, canteen, a little food, a stiletto-like bayonet and little else.

On patrol they sweep along the ridges, past loopholed village towers and down the valleys, loping ceaselessly along at a steady five miles per hour. After a 20 to 30 mile circuit, they return to their fort.

Pacification in this rugged terrain is a he-man's job, and the tribesmen, reputedly the best marksmen in. the world, never let a patrol leader make the same mistake twice.

The Khybers are led by officers from Pakistan's regular army. There is a standing order that an officer — who generally speaks English and Urdu — must learn the Pushtan language of the Pathan before he can punish a rifleman.

Capt Mohammed Akram, a company commander, said that the proud Pathan will put up with any punishment except abuse. He describes them as being recklessly brave, and extraordinarily loyal.

The lowest rank in the Khyber Rifles is the sepoy (private) whose pay is about $10 per month. When recruited he is given nearly $10 "kit" money that goes toward outfitting him with necessary items of equipment. As he advances in proficiency his pay may reach $12 per month.

Each rifle platoon is made up of a specific Pathan sub-tribe such as the Afridis, Akoras, Seni or Baraks.

In 1897 all outposts and forts held by the Khybers were attacked by Afridis. More than 12,000 tribesmen engaged in the battle, brought on when several restless tribes south of Khyber Pass joined with the powerful Afridis to close the famous road.

Near the end of WWI the Khyber Rifles were disbanded. Reactivated in 1919, their strength was raised from 500 to more than 1,700. In 1946, when the decision was made to build the gigantic Warsak dam near Peshawar, the unit strength was raised.

When the Khybers were reinstated and the tribes could again join the unit, joy reigned in tribal blockhouses and there was better pickings at the tribal tables.

The clear-eyed, hawk-featured hillmen take great pride in serving in the outfit, and desertions are unheard of. They are well aware that their outpost is at the end of the line and they intend to keep it the frontier of freedom.