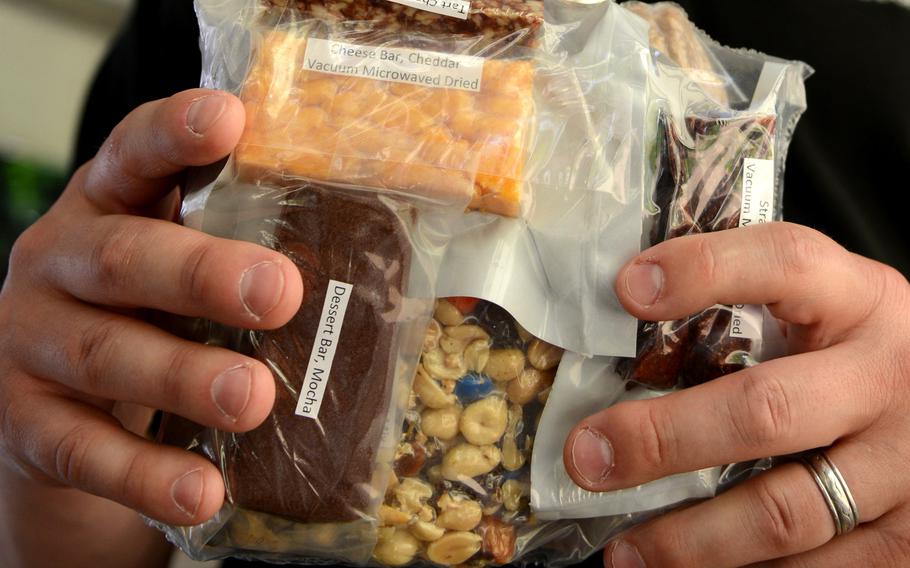 The prototype Close Combat Assault Ration on display at the Pentagon May 24, 2018 includes a tart cherry nut bar, cheddar cheese bar, mocha desert bar, vacuum-dried strawberries and trail mix of fruit and nuts, among other items that were vacuum microwave-dried. (Gary Sheftick/U.S. Army) 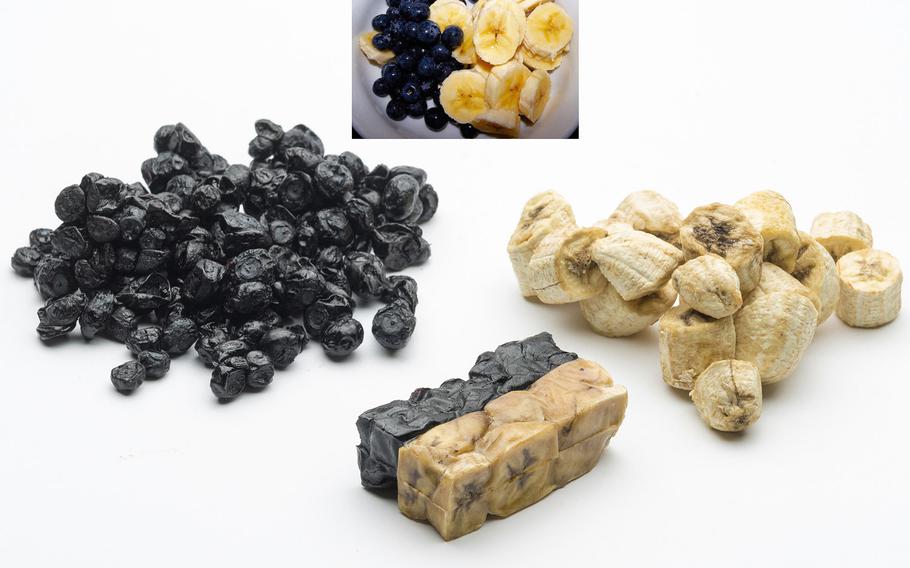 The Army hopes vacuum-microwave drying technology will allow them to put fruit and vegetables into rations. The vacuumed microwaved banana is about a third of its original size while still being springy and pliable — not hard like a fully dehydrated banana chip. (U.S. Army) 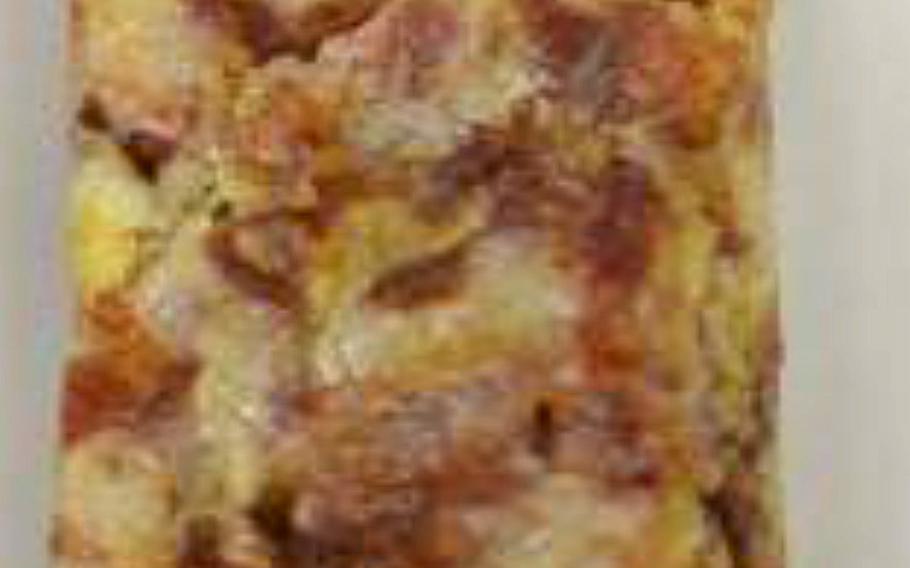 The Army hopes vacuum-microwave drying technology will allow them to put more nutrition into smaller rations. One entree, a bacon breakfast bar, shrinks ingredients into a small bar with a meal's worth of calories. (U.S. Army) 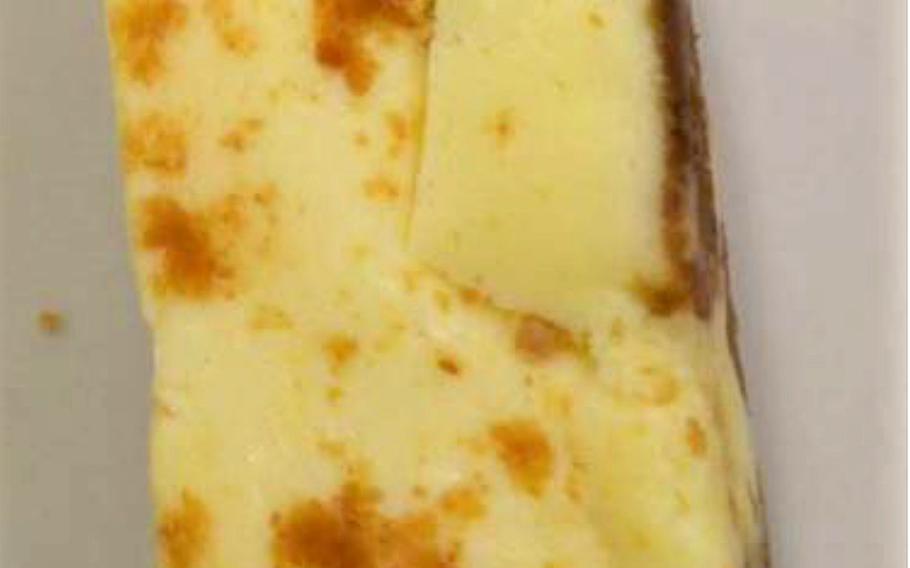 The Army hopes vacuum-microwave drying technology will allow them to put more nutrition into smaller and smaller rations. One entree, a cheesecake, could offer variety in the flavors soldiers can expect from their rations. (U.S. Army)

Soldiers of the future may be eating bacon and egg breakfasts via tiny food bars, due to a new process that shrinks meals to a fraction of their normal size.

Think sous vide, but for tactical quiches that may end up in your next Meal, Ready to Eat.

One dish begins with bacon, egg, cheese and heavy cream. The ingredients are inserted into a vacuum microwave dryer for 80 minutes of shrinkage and then squeezed by a machine. The result: a bar that’s smaller than a Snicker’s candy bar but with twice as many calories — and much more nutrition.

Yang and other food scientists at Natick are researching the Army’s new generation of portable rations. On the menu of the future are MRE pizzas, portable fruit, and a light-weight ration for soldiers on the go.

Yang’s bars may soon be found in the new ration, the Close Combat Assault Ration, which is supposed to contain three times the nutrition of a normal MRE while being lighter and smaller. Prototypes for the new ration are about one-third the weight of similar MREs, an Army statement said.

The military is trying to figure out how to feed small, isolated units who may go up to a week without resupply, Yang said. Currently, a soldier would need 21 MREs to survive that week.

“No one wants to carry that much MREs,” Yang said. “The No. 1 feedback from the field: we need to be able to reduce the weight.”

The secret for losing weight — for food, if not the people who eat it — may be a technology known as vacuum-microwave drying.

This method involves placing food into a dryer, sucking all the air out of the container and then dehydrating the food until it shrinks.

In a vacuum, water boils at a much lower temperature than normal. While different in many ways to the increasingly popular sous vide method of cooking, the two techniques both use vacuum sealing to give cooks more control over the process and cook at lower temperatures.

In vacuum-microwave drying, the food is cooked at 30 degrees Celsius, or essentially room temperature, which means less exposure to harsh temperatures that could make everything tough or powdery. The mildness of the drying also means the food does not lose as much nutrition.

The goal, Yang said, is to create MRE bacon that is springy like a raisin, not dry like beef jerky.

The Army believes the new technology will result in rations with fresher-tasting fruits and vegetables.

A vacuumed microwaved banana after compression is about a third of its original size while still being springy and pliable — not hard like a fully dehydrated banana chip, according to a military press release.

Yang said he recently shrunk cheesecake into portable bar form, which made him happy.

He noted that while the technology has been around for decades, the shrinking machines used to be too large and bulky. But as the dryers have shrunk, their utility has grown.

“Every ounce counts in a backpack you’ll be carrying for three or more days,” she said.

Marx de Salcedo keeps up with military food innovation and the ways the technology and foods reach the public. She noted the Army has tried other forms of shrinking food in the past, sometimes to not so great results.

“It reminds me of another feeding system the Army thought was going to be a big hit back in the 1950s and 60s: freeze dehydration, which removes almost all water. Boy, were they wrong,” she said.

The new vacuum dried rations may prove more edible, but Marx de Salcedo pointed out that the new CCAR hasn’t been field tested yet.

Usually it takes about three to five years for a prototype to leave Natick and end up in the hands (and bellies) of soldiers in the field, Yang said.

So far, taste tests have given high marks among volunteers, he said, although formal evaluations have not begun. Scientists are still testing whether the new bars will be able to stay fresh for a required three years.

The Close Combat Assault Rations will not be replacing MREs, Yang said. Instead, the new rations are a successor to the First Strike Ration, an attempt from 2009 to provide lightweight nutrition for soldiers fighting in the field.

While famed for their caffeinated beef jerky, Zapplesauce and Ranger Bars, low demand for the First Strike Ration in comparison with the MRE led the Defense Logistics Agency to halt procurement, Yang said.

The Close Combat Assault Ration, and the exotic shrunken bars contained within them, represents another attempt by Army food scientists at creating lightweight and hopefully edible nutrition.

“My concern,” Yang said, “is to find any good tech with sound scientific ways that will benefit soldiers.”