The howl and the pussycat 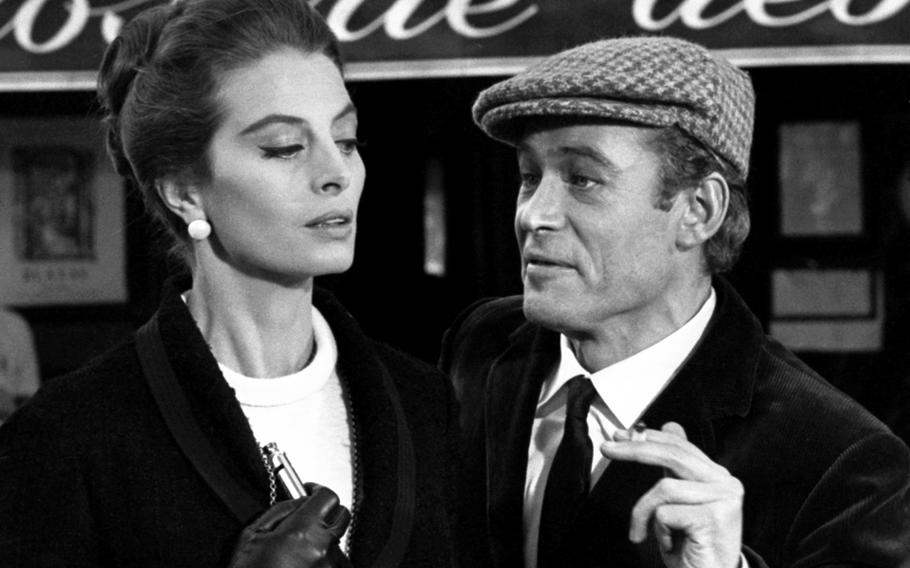 Peter O'Toole and French actress Capucine, during the filming of a scene from "What's New, Pussycat?" at the Closerie de Lilas café on Paris' Boulevard Montparnasse in 1964. ()

Peter O'Toole and French actress Capucine, during the filming of a scene from "What's New, Pussycat?" at the Closerie de Lilas café on Paris' Boulevard Montparnasse in 1964. () 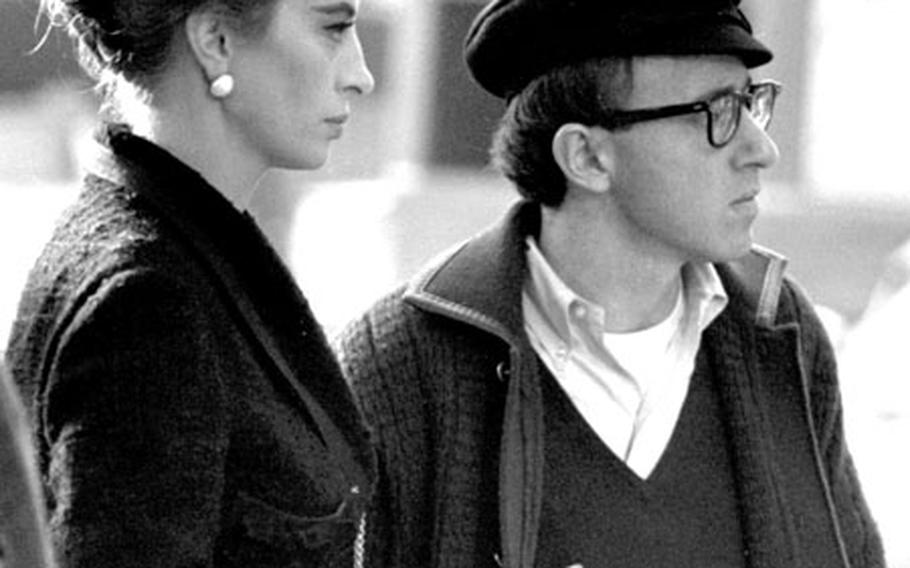 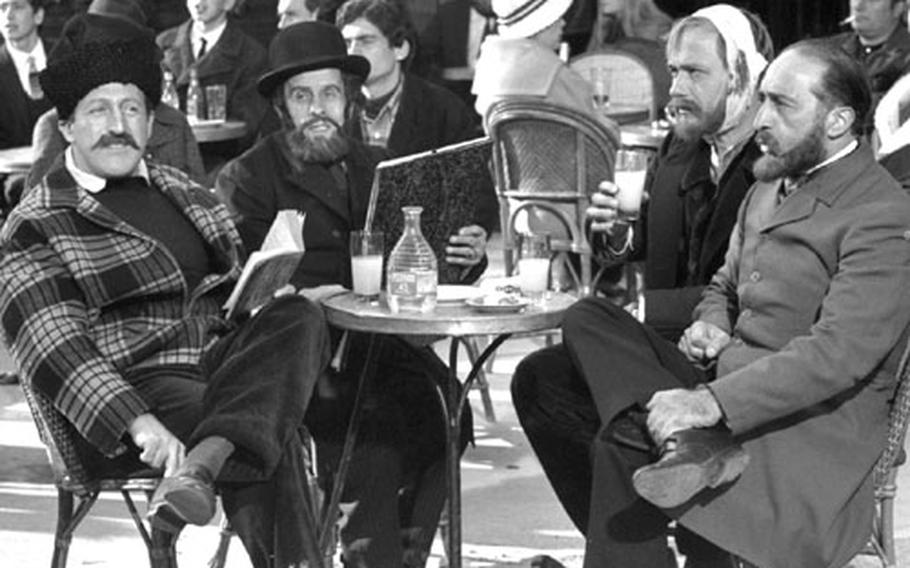 During the scene in the café, the camera quickly focuses on actors made up to resembl Zola, Toulouse-Lautrec, Van Gogh and Gauguin. (Ted Rohde/Stars and Stripes) 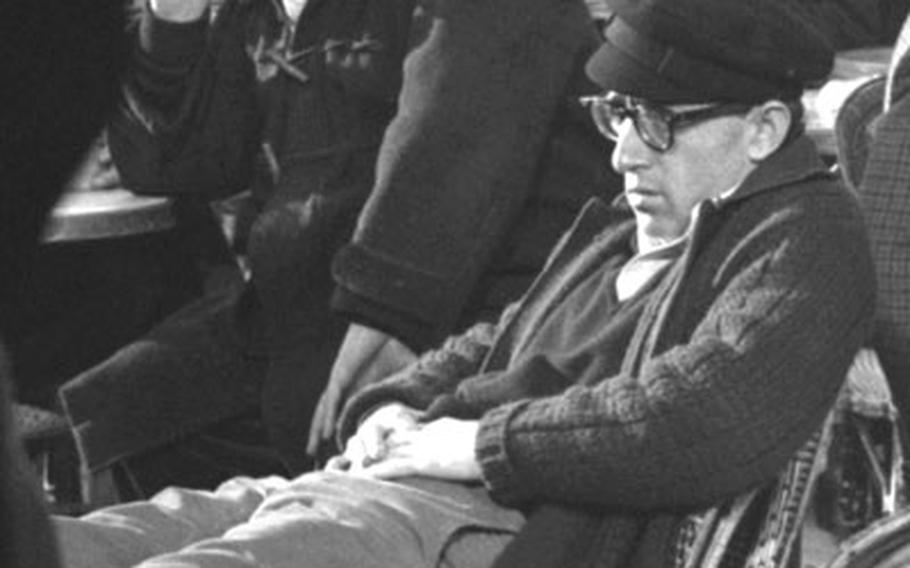 Woody Allen slouches among the extras at the café. (Ted Rohde/Stars and Stripes) 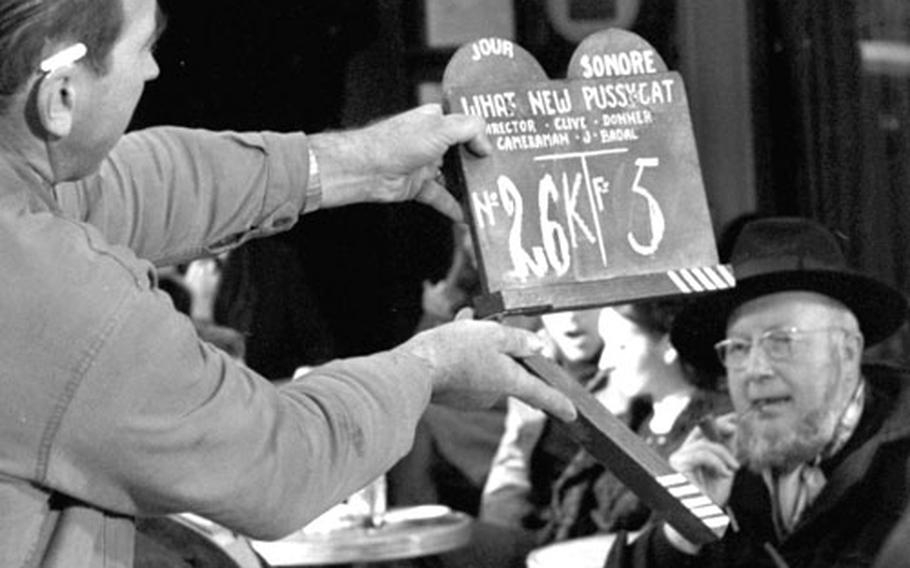 The start of another take. (Ted Rohde/Stars and Stripes) 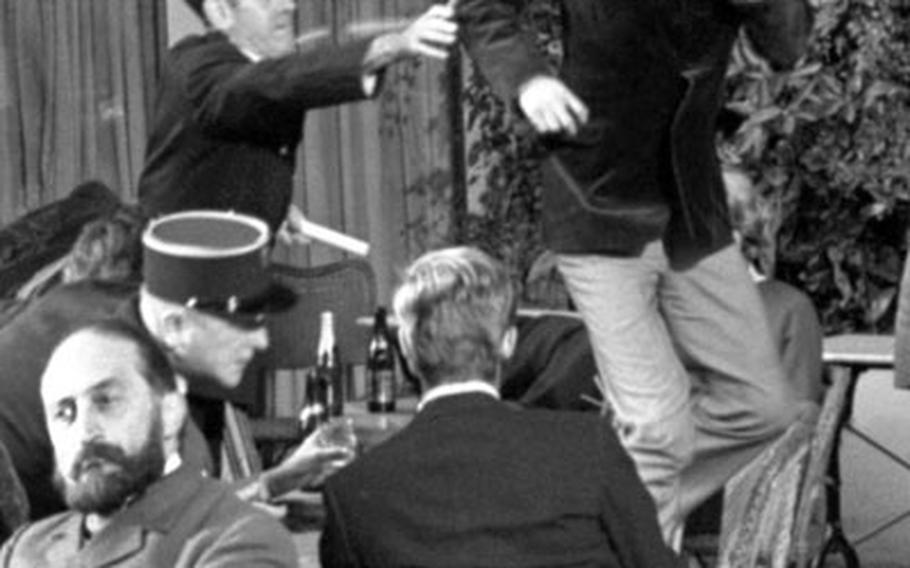 Peter O'Toole flees the café with a gendarme in close pursuit in a scene from "What's New, Pussycat?" on location in Paris. (Ted Rohde/Stars and Stripes)

FRENCH ACTRESS Capucine thrusts her black-gloved hands into her coat pockets and strolls nonchalantly into a sidewalk cafe.

Suddenly, Peter O'Toole of the thick, blond hair and piercing blue eyes, dashes up and grabs her arm.

Capucine reaches methodically for a silver whistle on a chain around her neck and blows a shrill blast.

O'Toole adopts a look of consternation.

"Goodbye, Renee," he whispers, racing away with four French cops on his heels. Overturning tables and chairs, he leaps into a jaunty sports car at the curb and zooms off.

The camera pans upward to a statue of General Ney at the corner. The sculpture holds an upraised sword in a classic "charge" pose.

What it means is a little unclear, but hundreds of Parisians have crowded around the Closerie des Lilas, a famous cafe on the Boulevard Montparnasse, to watch a United Artists crew film this scene over and over.

Director Clive Donner called for repeated retakes until he was satisfied with O'Toole's getaway, an episode in a new film called "What's New, Pussycat?"

"It's a zany comedy written by Woody Allen, the American wit," a publicity man explained. "Donner is staying away from the well-known tourist spots like the Eiffel Tower and the Arch of Triumph in an effort to capture the true flavor of Paris."

The Closerie des Lilas, a spot where Ernest Hemingway used to sit and write, is typical background for the outdoor scenes of the movie.

At one point in the filming of the cafe scene, the camera swings past a table at which four Frenchmen are seated, then jerks back in a quick double-take. The extras at the table are clearly meant to be Zola, Toulouse-Lautrec, Gauguin and Van Gogh, the last complete with a bloody bandage over his ear.

"We hope that many people will recognize them and get a chuckle," the publicity man said.

BIG WHITE lights burn through the boughs of sidewalk trees, and electric cables curl between a mobile power unit and the color camera. Inside the Closerie des Lilas, business is carried on as usual. Once space is set aside for the actors and crew.

Allen, the author of the "Pussycat" script, takes a role in the movie himself. He started as a comedy writer for television and branched into acting three years ago with a show at the Blue Angel night club. Later, he made a splash on television, but "Pussycat" is his cinema bow. He plays the pal of O'Toole, who, as publisher of a French magazine called "Sheik," is surrounded by beautiful women.

A little guy with serious brown eyes and heavy glasses, Allen said his nightclub act was a 30-minute talk with the audience "about everything that happens to me — and my dealings with my ex-wife and my psychiatrist."

Now that he has won recognition as an actor, the demands are greater.