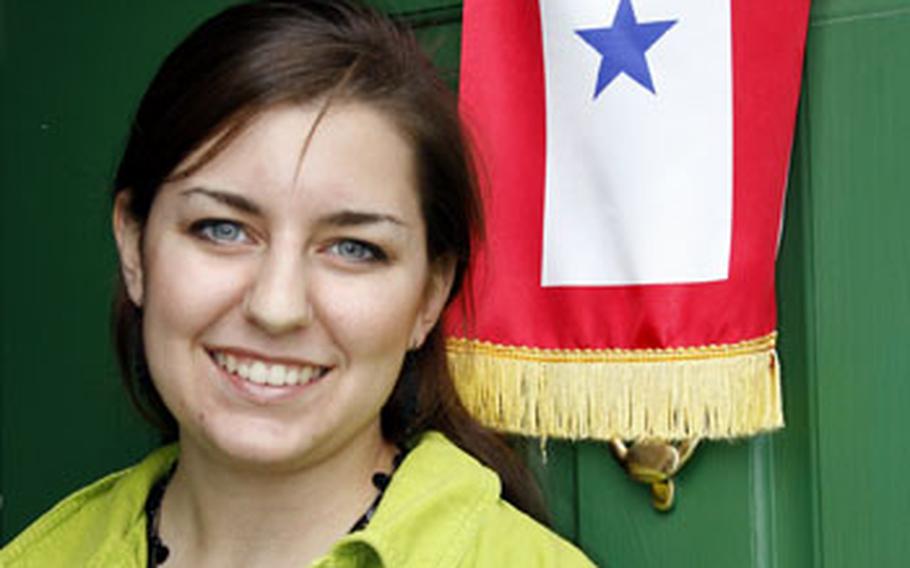 At her home in Philadelphia, N.Y., near Fort Drum, Stephanie Holmes displays the blue-star flag while her husband, 1st Lt. Chris Holmes, serves in Iraq in early October. "I was so painfully shy," she said of her personality before he left. "I was so dependent on Chris." (Joe Gromelski/Stars and Stripes)

While you were gone:

She went to a bar for the first time.

She bought you a puppy.

She made new friends, threw a party, bought a car, worked as a substitute teacher.

She missed you terribly.

Stephanie Holmes, 21, made a list of things she did while her new husband, 1st Lt. Chris Holmes, was serving his first deployment in Iraq. The list &mdash; and the changes in her over the past 15 months it represents &mdash; amazes even her.

"I was so painfully shy," she said. "I was so dependent on Chris."

She rarely spoke to strangers, she said, and nearly everyone was a stranger when Chris went to Iraq. She was alone in the house they had just bought, surrounded by boxes and wondering how she&rsquo;d get though.

"There were a couple of nights at the beginning, I&rsquo;d just bawl," she said. "You feel so alone."

There&rsquo;s little trace of shyness apparent in Stephanie now. She&rsquo;s candid, open, even ebullient. It feels good, she said, but it made her a little apprehensive about Chris&rsquo; return.

"Things have changed. I&rsquo;ve changed, and he&rsquo;s changed," Stephanie said. "I&rsquo;m worried about how he&rsquo;s going to react to my changes."

To be young, newly wed and separated: The two hadn&rsquo;t yet settled into roles of husband and wife when Chris went to war for 14 months. Stephanie was still in the process of becoming Stephanie. Chris was a frat boy and a much appreciated cut-up in his unit. He was known to get naked, smear himself with lotion, then chase around his company commander. He was also learning that life could be deadly serious. So, they both wondered, what would it be like when he came home?

Neither of the Holmeses, both from working-class backgrounds, was familiar with military life and combat deployments before Chris was commissioned after ROTC. His father had been in the Navy but was retired by the time Chris was born.

Neither is convinced it&rsquo;s the life for them, and they both chafe at what seems to them the military&rsquo;s one-size-fits-all approach and its bureaucratic and often unapologetic bumbling, such as someone&rsquo;s putting Chris on staff duty when he was supposed to be coming to his own wedding.

"They expect so much out of the people," Stephanie said of the Army hierarchy, "but they really don&rsquo;t come through for them."

Interviewed in Iraq in July, Chris was also dealing with disillusionment.

"When I first joined, yes, I was going to make the Army a career," he said. "But after being in it for a while, just the strict rules and regulations, and how everything in the Army seems to be catered toward the moron &hellip; the Iraq mission, you know, the higher up chain-of-command, stuff like that has soured me."

Stephanie said sometimes on the phone they talk about some of the things he&rsquo;s missed while being deployed: her 21st birthday, Christmas together and an annual World War II re-enactment they both participate in.

"&lsquo;It&rsquo;s not worth it.&rsquo; That&rsquo;s something he says a lot," she said.

Stephanie finds Fort Drum oppressive, with its car searches at the gate and the monotony of its buildings, and she worries she might drive unknowingly into a forbidden area and be arrested or something.

She never took to the Family Readiness Group. The women in that, she said, seemed not to understand that she worked, as a substitute teacher, and seemed more interested in having her bake things or asking her to babysit.

"I took my name off the phone list about a week after Chris left," she said.

She did bake, though, making cookies for her husband and 14 of his soldiers and packing them in separate little bundles, one for each. She stayed busy, set up the house, trained the two new dogs, taught classes as a substitute, and she thought about her husband all the time.

"I haven&rsquo;t been to church much. But I pray every night," she said. "I pray for him to come home safe and sound and soon. Because I&rsquo;m afraid if I just pray for soon, he&rsquo;ll come home in a box."

Stephanie said she made it through because, when forced to, she made friends and grew more independent. Most important, there&rsquo;s Brad, her husband&rsquo;s former roommate, who&rsquo;s like a brother to her now and has been her Mr. Fix-It; and Tracey, whose husband is also deployed with the Triple Deuce. The two women spend a lot of time together at the local Panera Bread sandwich shop, not exactly commiserating.

"We don&rsquo;t even talk about how much we miss them," Stephanie said. "There&rsquo;s a mutual understanding."

They also visit a local gay bar decorated with Tiffany-style lamps. They like it because it&rsquo;s "classy," Stephanie said, and because they don&rsquo;t have to worry about being hit on.

At the beginning of the deployment, Stephanie said she would ask Chris if it was OK if she went out at night. It was.

"Now it&rsquo;s like, &lsquo;Where are you at? I hear music!&rsquo;" she said.

The couple comes from the same small town in Pennsylvania and always knew each other. They started dating in high school, after Stephanie got her braces off and started wearing contacts. Chris, who is two years older, didn&rsquo;t recognize her, she said, but he did think she was, as he put it later, "cute as hell."

"I got my first kiss from Chris," she said.

Stephanie likes order &mdash; she vacuums every morning when she gets up, even before having coffee. She was a straight-A student and is from a conservative family who taught her to budget and save. Her parents washed her mouth out with soap once, she recalled, when she uttered a curse word. Until recently, she frowned on alcohol use.

Chris was "kind of the bad boy, the class clown," she said. He&rsquo;s edgier than she is, known in his unit for his ironic sense of humor. Both agree he&rsquo;s more relaxed, more impulsive than she is, sometimes a spendthrift and often a slob.

But he wasn&rsquo;t so relaxed when he was home on leave, he said. He was more irritable, talked louder, cursed more, drove faster and, he knew, got upset at times.

"I mean, I never really yelled at her or anything like that," he said. "But she could tell when I dealt with other people, it was like, &lsquo;Goddamn it, why can&rsquo;t you figure this out?&rsquo; "

She remembers an awkward moment during his leave &mdash; she had just baked a pie &mdash; when the two just sat there silently.

"Are you going to say anything?" she finally asked.

"I don&rsquo;t know what to say," he replied.

But those awkward moments paled next to the intensity of their reunion at the Syracuse, N.Y., airport.

"As soon as we touched, it was this overwhelming feeling &mdash; of everything we&rsquo;d been through, how long and how hard and how heavy &mdash; it overcame me like a wave," she said. "We almost collapsed."

Stephanie trained to be a veterinary technician. But she has come to believe that family life is more important than anything. Veterinary hospital hours are not compatible with the flexibility she needs to be available to spend time with Chris.

"If you&rsquo;re a substitute teacher, you can take the whole month off," she said.

She had hoped to get pregnant while Chris was home on leave. She still wants a baby.

Stephanie said if Chris changes his mind and decides the Army is a good career after all, she&rsquo;ll be fine with that. The Army offers some good things: job security, regular promotions and pay raises, medical care.

"I&rsquo;m actually scared about his getting out," she said. "But whatever, it will work out.

"We want it to go back to the way it was, but deep down we know it will never be the same. Experiences change people."

Chris and Stephanie Holmes talk about deployment, being apart and reunion.