The great wall of Ramstein: Instructors learn the ropes at climbing area Jerry Leake makes his way up one of Outdoor Recreation&#39;s new climbing walls as Sarah Carlisle gets checked out on belaying technique Friday during an instructor course in the Kaiserslautern Military Community Center. (Ben Bloker / S&S)

Jerry Leake makes his way up one of Outdoor Recreation&#39;s new climbing walls as Sarah Carlisle gets checked out on belaying technique Friday during an instructor course in the Kaiserslautern Military Community Center. (Ben Bloker / S&S) 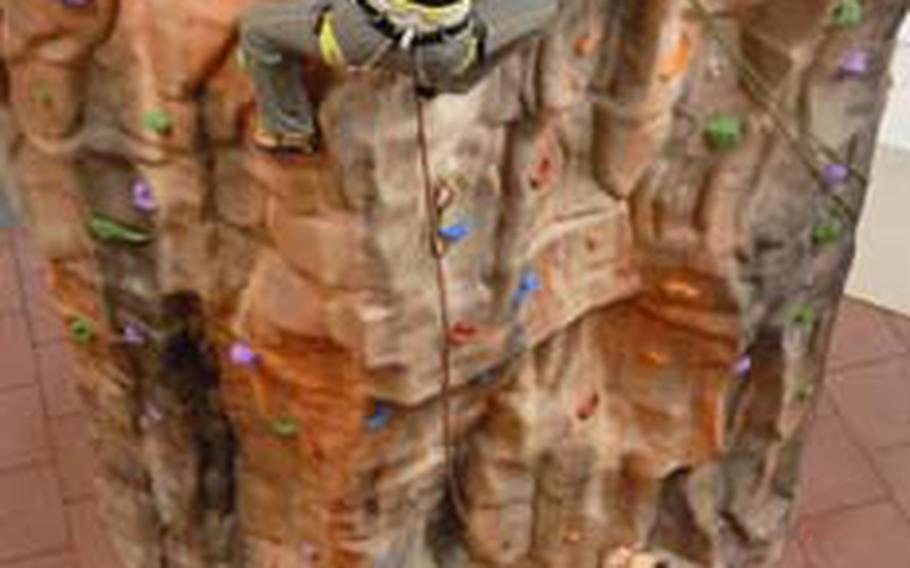 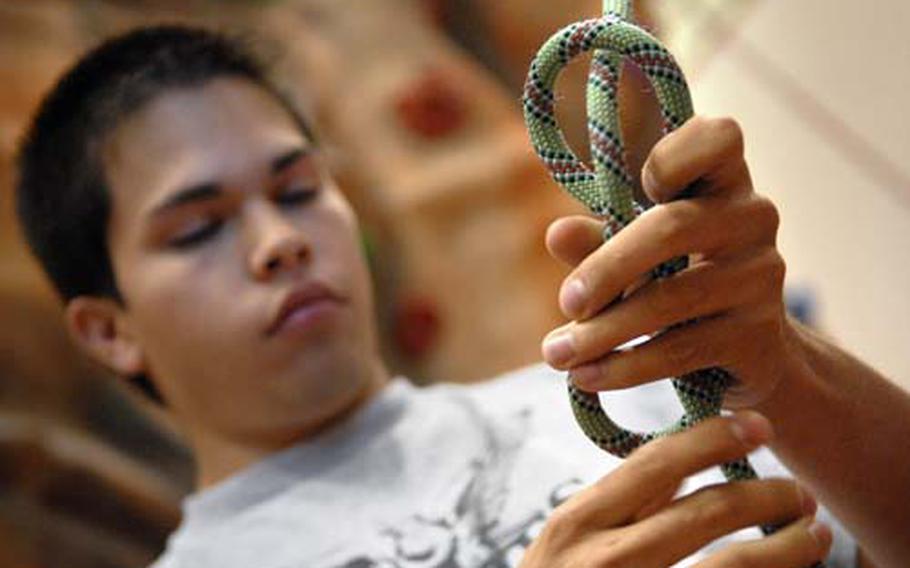 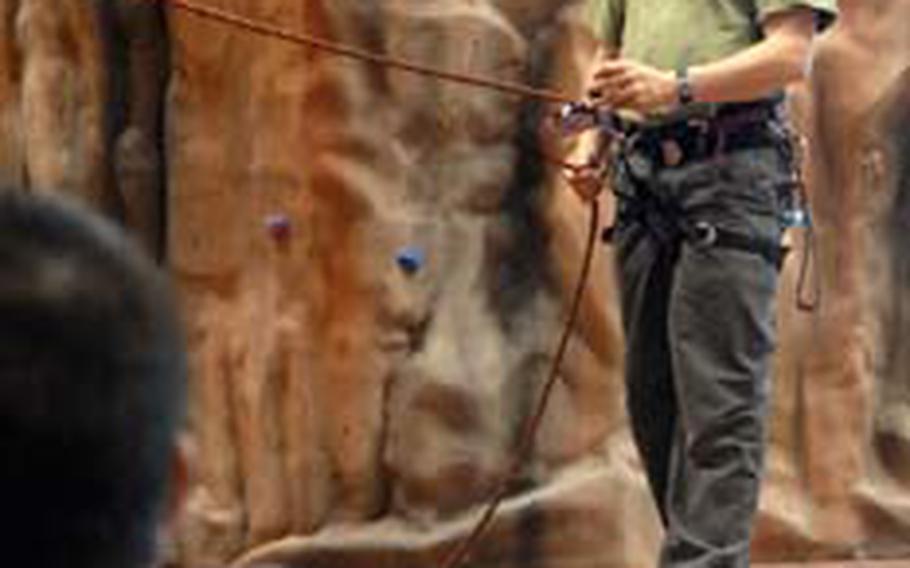 RAMSTEIN AIR BASE, Germany &#8212; It&#8217;s not Yosemite&#8217;s El Capitan, but a man-made crag sporting dozens of colorful hand and footholds at Outdoor Recreation&#8217;s new $28 million facility offers something for climbers of all abilities, say base officials.

Climbers can ascend the wall starting on July 2, the first day of business for a few offerings in the Kaiserslautern Military Community Center. Outdoor Recreation, Ramstein Tickets and Tours, and Macaroni Grill will be the first venues to swing open their doors to the public.

The textured, composite-material rock wall, designed by Walltopia, stands taller than 30 feet in places. For novices, there&#8217;s a small face for bouldering without ropes, buffered at the bottom with big yellow gymnast mats. For the more experienced, an inverted tower, which looks like a giant rugged cone, awaits.

"This is a great wall. It&#8217;s an awesome facility," said Jon Tierney of Acadia Mountain Guides, a company of professional guides from Bangor, Maine.

"The focus is not just on technical skills but how to teach climbing to new people in an artificial wall environment," Tierney said.

Outdoor Recreation has 12 full- and part-time climbing instructors in training, including one active-duty member, said Director Carol Cox, who added she is looking for a few more staff members. Some are experienced climbers, others are just learning, Cox said.

Jennifer Mueller, Outdoor Recreation program director and a student in Tierney&#8217;s class, is climbing again after an eight-year hiatus.

Ramstein&#8217;s wall is the largest in the Air Force, Cox said, and "safety is the prime objective."

In developing a safety program, Cox consulted with other Air Force bases that have climbing walls about lessons learned.

Misawa Air Base in northern Japan, for example, experienced growing pains after opening its 24-foot-high climbing wall in summer 2005. The wall was closed temporarily after three climbers fell on separate occasions. Climbers had to be certified to use the wall, but could climb unsupervised.

Cox said at Ramstein "rovers" will be on the floor at all times.

"No one climbs on the wall without someone checking their gear and their equipment," she said. "They&#8217;ll be checking for people who may be fatigued or climbing over their ability."

To use the wall at Ramstein, individuals will be required to take a 45-minute "Climbing 101" to learn the basics of fitting a harness, tying knots and belaying. The class is for ages 4 and up and will teach top-roping, a climbing style in which a rope runs from a belayer at the foot of a route up through an anchor at the top and back down to the climber, where it&#8217;s attached to a harness. The belayer controls the rope; if a climber falls, the belayer locks the rope in a belay device, tightening the rope so a fall is only a few feet.

Climbers on one wall face will be able to use one of four automatic belaying devices, designed to automatically arrest a climber&#8217;s fall and allowing climbing without a partner.

The wall does have a section suitable for the more advanced lead climbing, where a climber clips in while ascending. Lead climbing is more risky than top-roping, since a slip can result in a steeper fall.

Cox said for now, her instructors will only be teaching top-roping. Someone with experience who wants to lead climb will have to demonstrate their abilities first, she said.

Fees for equipment and climbing have not been set yet, Cox said.

Customers won&#8217;t be allowed to set routes, she added. That will be a staff job.

But route possibilities &#8212; which follow the colorful climbing holds bolted into the wall &#8212; are nearly endless, Tierney said.

"You can build all kinds of routes in here," he said. "This is much larger than many walls you&#8217;ll find in the States."