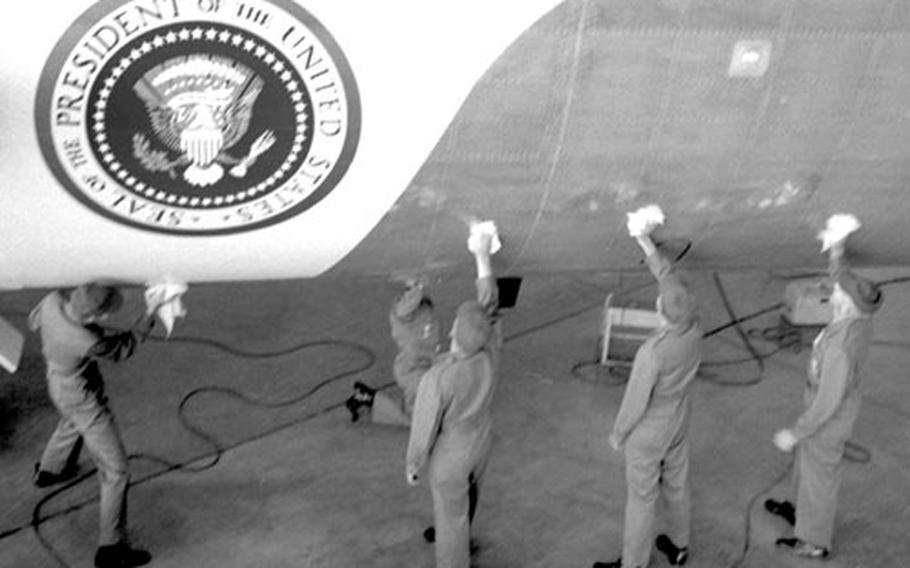 Buy Photo
Air Force One gets a cleaning at Andrews Air Forcec Base in 1966. (Bob Milnes/Stars and Stripes)

WHEN President Johnson takes off Monday for Manila, and the seven-nation conference on Viet Nam, he will board the largest and longest-range jetliner in the world.

The special military version of the Boeing 707-324B Intercontinental is four years old this month.

On occasion, the plane is used by other officials besides President Johnson. It has a 600 mile-per-hour cruising speed and can fly 7,000 miles nonstop. On one occasion, flying Glenn T. Seaborg, chairman of the Atomic Energy Commission, and other officials, to Russia, the jet set 30 world speed records between the East Coast of the United States and Moscow. No. 26000 made the eastbound trip in 8 hours, 38 minutes and 42 seconds. The return trip took 9 hours, 53 minutes and 52 seconds.

UNTIL QUITE recently the public had seen only one photograph of the inside of the airplane. That one, of course, was the swearing-in of President Johnson in Dallas Nov. 22, 1963. Since the formal oath-taking was held aboard Air Force One, a photographer had to document the occasion for history.

Because, the President must be in contact with military and civilian officials at all times, Air Force One is more than just an ordinary big, fast transport. It is also a complete flying communications center with long-range radios and electronic teletype circuits that enable him to be connected by secure telephone with any U.S. installation in the world. If necessary he can even be connected by teletype with the "hot line" to Moscow.

THE airplane's center cabin stateroom is fully equipped for conferences, so the President can continue to work regardless of the time or place. The cabin is fitted with audio-visual aids, tables, swivel chairs and divan.

Two galleys at either end can prepare a variety of meals for the President and his party of officials, Secret Service agents, secretaries, aides, physician and medical corpsmen. Cooks can prepare gourmet meals, but chiefly turn out the tuna salad and cream cheese sandwiches the President prefers when he's traveling.

Behind a sliding wooden wall are two king-size single beds, rigged with oxygen outlets and covered with blue-green blankets bearing the words that are so familiar aboard this unusual airplane — Air Force One.

AN ELITE Air Force crew, probably the best in the world and certainly the finest in the United States, mans the Flying White House.

Lt. Col. James U. Cross, the presidential aide and pilot, heads the 12-man unit that normally flies No. 26000. Cross entered the Air Force in World War II and saw service in the China-Burma-India theater. He has been flying special mission aircraft for the past 8 years and before coming to the White House flew the aircraft of then Vice President Johnson.

With Cross in the pilot's cabin normally are Maj. Paul Thornhill and Copt. Donald L. Short, copilots and Lt. Col. Charles Rogers, navigator. They work in a cockpit equipped with the latest available communications and navigation gear.

ON THE GROUND; maintenance is handled by a crew of experts under CM. Sgt. Murray A. Orvin, flight chief. SM. Sgt. Thomas Webb is the crew chief.

Three noncommissioned officers, CM. Sgt. Charles E. McCreedy and S. Sgts. Kevin A. Fitzpatrick and Carroll McDougal handle the security for the airplane when it is on the ground at its home base, Andrews AFB, Md., or anywhere else in the world. These men are among the best in the business and McCreedy, for example, is the only enlisted man in the Air Force to have completed the FBI Academy. For the round-the-clock security the 3 NCOs draw on 30 selected guards from a special Air Police Squadron.

EVERYONE and everything that goes aboard the airplane is checked, including fuel and food. The fuel is checked twice a day by lab technicians and Presidential crew stewards even vary the food source before taking it aboard.

BESIDES the sleek and sophisticated No. 26000, the wing maintains a variety of jets and propeller-driven aircraft ready at a moment's notice for White House-directed flights anywhere in the world.

One of the VIP wing's airplanes, for example, recently carried Ambassador W. Averell Harriman around the world on a peace offensive.

The 89th has been providing air transportation for top officials for the past 17 years. In this time 89th aircraft logged more than 325,000 flying hours on thousands of missions in and out of airports all over the world and under a variety of conditions.

Besides four large jets, of which No. 26000 ranks first, the wing has 35 aircraft, including four C135 Strato-Lifters, four C121 Constellations and three C118 Liftmasters. There are also 11 C130 Jetstars and four C131 Convairs used for domestic travel, as well as others.

In its 17 years, the vying has no record of a major accident.

Appropriately, the wing's Latin motto "Experto Crede" means "Trust One Who Has Had Experience" and the men of the 89th have that.

Navigators must have at least 3,000 hours flying time over foreign routes.

Flight engineers and radio operators have an average of 14 years of experience. Maintenance airmen have at least three years of experience in their fields, and flight attendants must be a composite of skilled chef, personal valet and customs specialist. Above all, they must have the skill and tact to serve statesmen, kings and presidents.