The fiery birth pangs of an island 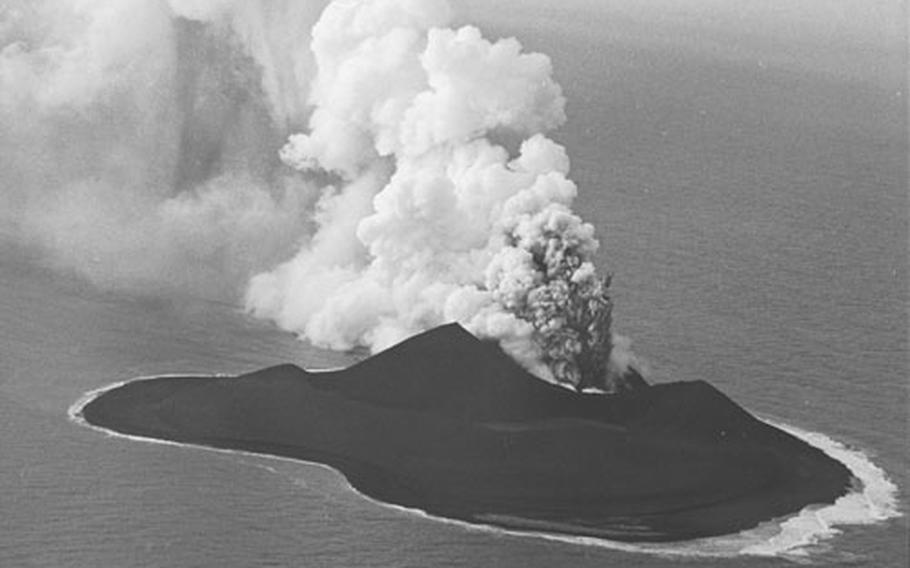 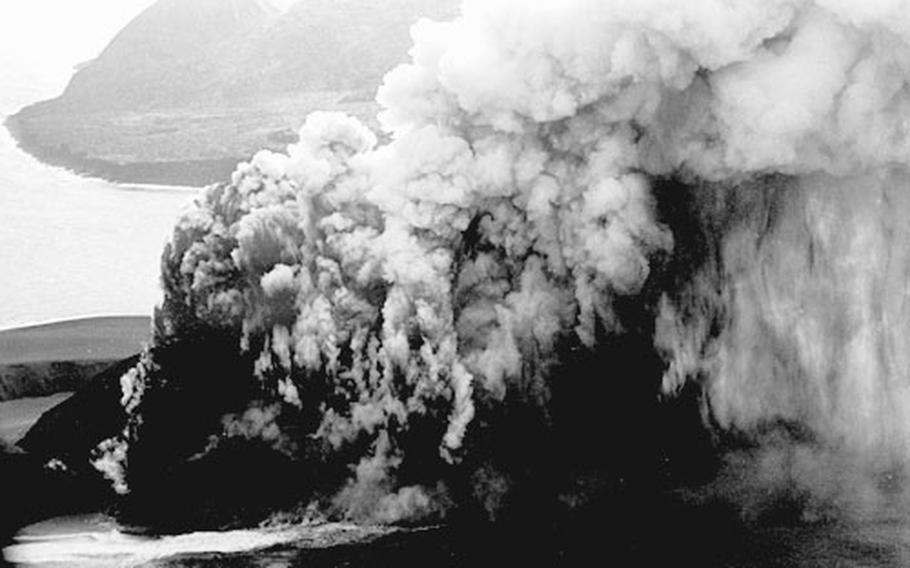 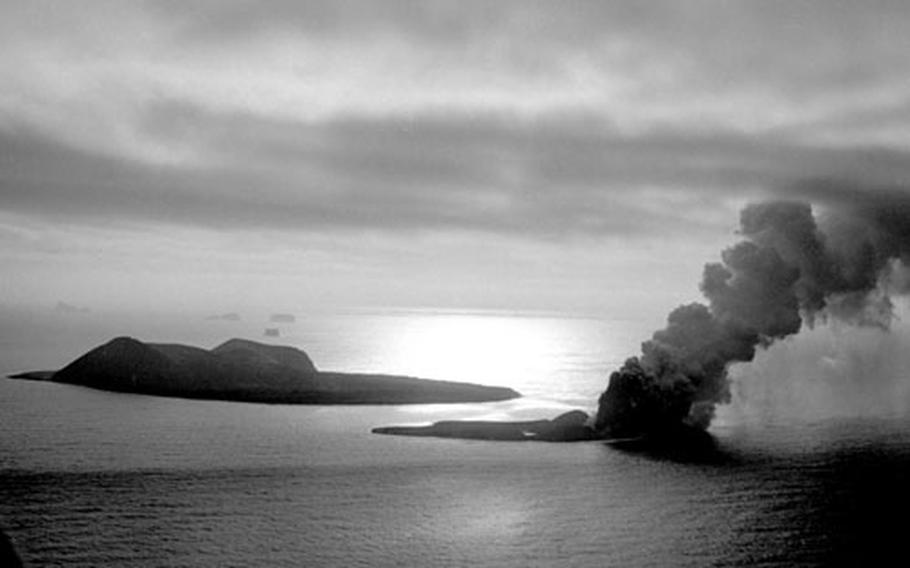 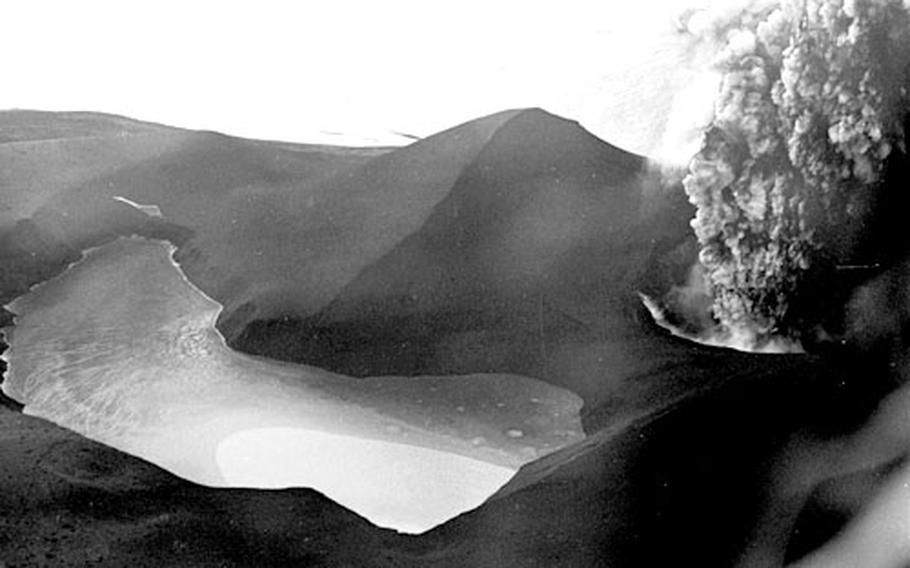 The island of Jolnir emerges from the sea south of Iceland in July, 1966. Visible in the background in the second and third photos is Surtsey, created a few months earlier. Surtsey is still there, although smaller, but Jolnir has since been destroyed by erosion. (Merle Hunter/Stars and Stripes)

THE PRIMEVAL fury of creation is an awesome sight-even on a miniature scale.

When a volcano erupts, the same elements are released which long ago tempered the continents.

Thus it was that three years ago the eyes of the world turned to the south coast of Iceland, itself a mere adolescent in geologic terms, where a new island began emerging from the sea.

The island has continued to grow under the data-keeping hand of man. And now, some three years after its spectacular birth, it seems destined to become a permanent feature in North Atlantic geography.

Today the ham-shaped .island is double the size of Monaco, half the area of New York's Central Park. Its highest peaks rise some 600 feet above the booming surf and it features a lagoon on the northwest exposure.

Because of its fiery origin, Icelanders decided to name the island Surtsey &mdash; for the great Fire Giant of ancient Norse mythology.

Relatively calm in recent months, a new island has been taking shape off the southwest coast of Surtsey since December. Growing in much the same fashion as Surtsey first grew, it is continuing to expand from the marine eruptions and now measures more than a third of a mile across.

Surtsey, with an area of more than one square mile, is the largest of 10 underwater eruptions that have been recorded near the Icelandic coast.

It began without warning (there were no tremors and no geological indicators to suggest its arrival) from a depth of 400 feet.

Early in the morning a member of the crew sniffed the smell of sulphur in the wind. A similar smell was reported by farmers on nearby islands.

The odor suggested a fire at sea, but no one could offer an explanation.

Then through the morning mist the first sighting of the eruption &mdash; a 200-foothigh column of jet-black ash and vapor rising from the surface of the sea &mdash; was made some four miles west of Geirfuglasker, the southernmost of the Vestmann Islands.

As the fishing boat came closer, the turbulence of the sea increased and the water temperature was 11 degrees Centigrade, four degrees above normal.

The black column continued to rise, ejecting stones and giving off flashes of fire. By 10:30 a.m. &mdash; some three hours after it first was observed &mdash; the column was nearly two miles in height.

By 11 a.m., when Sigurdur Thorarinsson and other Icelandic geologists arrived at the scene, the column had reached a height of 2.5 miles. In the eruption area the sea was a peculiar brownish-green, in contrast to the turquoise color the sea normally assumes off the south coast of Iceland.

On Nov. 15 the eruptions were even more violent. And by 9 a.m. a dark patch could be seen under the eruption cloud. It was apparent a new island had been born from the sea. It was 30 feet above the water and 1,500 feet long.

By Nov. 20, Surtsey was nearly 3,000 feet in length and split in the middle. By the end of November it was horseshoe-shaped, and in the northeast rose 100 feet.

DURING the first months of the eruption, the sea, mixing with molten elements from the north and south craters on the island, caused a series of violent explosions. From them, "bombs" were ejected skyward, some of them carrying to heights of more than a mile. As they hurtled through space the bombs were trailed by ash and steam.

When bombs fell against the sides of the craters, they were transformed into masses of glowing fire. When they plummeted into the sea, they broke with the percussive violence of thunder.

In the heaviest explosions, bombs were catapulted a mile from the island. At times the explosions ejected so much sea water over the crater rims, that mud streams ran all the way to the beach. As a result the island became covered with gray salt stripes as the water evaporated.

For the most part the explosions were almost inaudible. The steam muffled the noise. But booms were heard when bombs crashed into the sea, and sent high spouts of water into the air.

Eruptions often were accompanied by lightning, which on occasion could be seen from the Icelandic capital, Reykjavik, more than 70 miles away.

At-the end of December 1963, volcanic activity occurred in the ocean floor, approximately 1.2 miles northeast of Surtsey, not far from the island of Geirfuglasker. There were eruptions at three places along a 1,500-foot fissure. These lasted only a few days but a ridge was formed some 60 feet below the water's surface.

April 4, 1964, the marine eruption ceased on Surtsey and was replaced by a lava eruption similar to those that occur on land &mdash; a fact that made the island's permanence almost certain.

Thorarinsson, who is director of the Geological Department of the Icelandic National Museum of Natural History, described his flight over the island on the first afternoon that lava made its appearance:

"When I passed across the island about 3 p.m. a narrow but swift-flowing red-hot lava stream was running between semi-hardened lava banks toward the sea, but when it reached the sandy beaches it spread across the surf wall. As each rivulet entered the sea a white ball of steam banked up. The surface of the lava lake was approximately 20 yards. above sea level. The glowing lake sported lava columns 50 yards in the air and splashes flew over the old crater rims From the lava, the sea had assumed a brownish-green color over a fairly large area. Those of us who witnessed the scene from the air could hardly contain our fascination. We had never before seen a fountain of such ravishing beauty &mdash; and now the future of the island was insured."

The lava eruptions continued until April 29. At times, massive wave spilled out upon massive wave &mdash; the speed of the lava flow reaching up to 50 feet a second.

The initial landing on Surtsey took place Dec. 6, 1963, just 21 days after the island began blowing its top. Three Frenchmen representing the magazine Paris Match risked their lives. They managed to stick it out 15 minutes, but the intensity of eruption and heat forced them back to the relative serenity and safety of the sea.

Following the Frenchmen, a parade of scientists, photographers and writers made the hazardous excursion to the island. After the start of the lava flow, the number of landings increased, since the risk involved had been greatly reduced.

Scientists &mdash; geologists, geographers and biologists in particular &mdash; from many lands have been fascinated by Surtsey. Day by day, month by month they have charted the growth of the island.

Never before in recorded history has man been presented with such an opportunity to observe creation first-hand and to assess its progress and methods.

No land can be more devoid of life than a new sea-rinsed volcanic island. And so scientists are studying Surtsey &mdash; to determine from where, how and in what order living organisms find its shores.

Birds and microscopic life have made their way to the island. Seeds of a variety of coastal plants have drifted onto the rocks and sand. Inquisitive seals watched the explosive events on Surtsey from a safe distance during the eruptions, then finally wobbled ashore when things cooled off.

Scientists believe the settlement of animals and plants on Surtsey might shed light on the reintroduction of life after each of Iceland's four glacial periods.

The Vestmann Islands group, which includes Surtsey, comprises 15 islands and some 30 skerries and rocks. They have been built up on a southwest-northwest volcanic fissure by underwater and lava eruptions during the last 10,000 to 20,000 years.

Iceland itself is a volcanic island (the size of Ohio with an area of 41,000 square miles) which geologists claim is little more than 50 million years old. Big sections of the country were built up in the last million years. A tenth of the land area is covered by lava flows less than 10,000 years old.

And on Surtsey, the whole process has been telescoped into a matter of months. A remarkable and varied landscape has been created in less than three years.

A lava dome with a glowing lava lake in the summit crater, wide sandy beaches, precipitous crags lashed by breakers, gravel banks and lagoons &mdash; all belong to this infant island.

There are cliffs, grayish-white from the brine and silicon, giving them a resemblance to the white cliffs of the English channel, and there are hollows and soft, undulating land.

Surtsey is a fascinating island that may provide scientists with data for centuries of observation and comparison. Creative secrets may yet be unlocked as the story of this spectacular island unfolds.