The fastest way to a GI’s heart 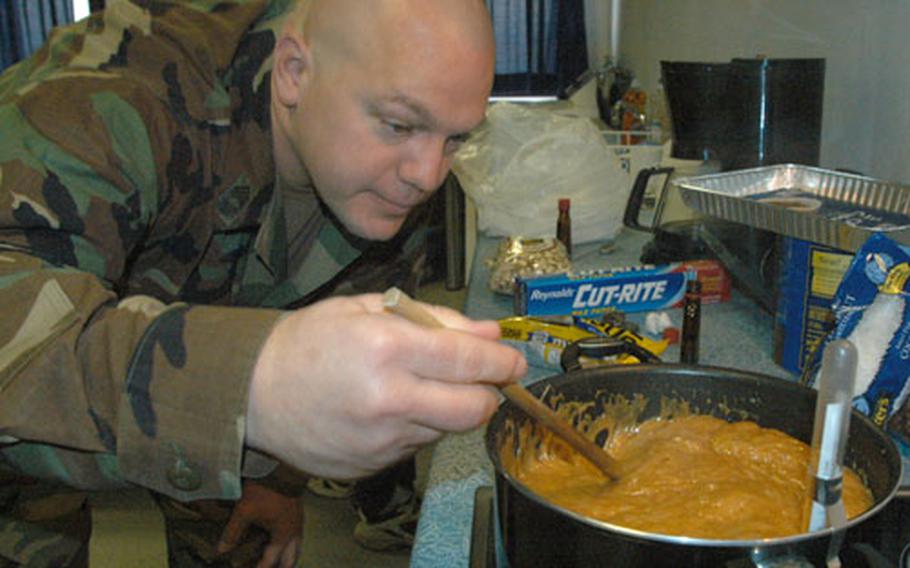 HEIDELBERG, Germany &#8212; Ask the soldiers standing guard at U.S. Army Europe headquarters about Master Sgt. James Davis, and they&#8217;ll tell tales of a thoughtful noncommissioned officer who checks their uniforms and fills their bellies with goodies.

For two years, Davis has filled much of his free time reaching out to troops on guard with handfuls of homemade jerky and caramel. He&#8217;s become somewhat of a local celebrity, although he doesn&#8217;t like to admit it.

Working for the USAREUR Equal Opportunity Office, Davis has no troops of his own. So he&#8217;s adopted all the local soldiers.

Each week, Davis makes jerky and caramel, then heads out to check on the soldiers.

He also keeps an eye on the troops&#8217; appearance. He makes sure soldiers are wearing the correct uniforms and reflecting good attitudes about their duty, he said.

After 19 years in uniform, Davis considers the Army home. He was raised in Liberty, Ind., a small town near the Ohio border, where for fun people &#8220;watch the stoplight change,&#8221; he said. The second of five children, Davis acquired a giving spirit from his mom, Jan, he said.

In 1983, at age 17, Davis enlisted in the Army and became a mechanic. He spent his career stateside until May 15, 2001, when he arrived in Germany and was assigned to Campbell Barracks in Heidelberg.

When terrorists struck on Sept. 11, 2001, Davis was among the troops dispatched to guard bases and housing areas. Shortly after, he dug into a holiday recipe book given to him by his grandmother and began cooking sticky-sweet goodies.

At first he brought the guards cookies. Then he began buying pizzas &#8212; though he preferred passing out his homemade pumpkin bread. But he&#8217;s most famous for his jerky.

Davis spends about five hours each week making some 10 pounds of jerky in his dehydrator, a small oven that circulates air at low heat. The final product comes in a range of spicy intensities.

The hot jerky, a mouth-scorching stick of red meat Davis offers only to the daring, has become a challenge among troops. Most exclaim, &#8220;That&#8217;s good,&#8221; as their eyes water.

Built like a linebacker, Davis appears the last person to spend his free time cooking or working with crafts. But except for some occasional sports and reading, that&#8217;s what he does.

A line of holiday ornaments, his latest handicraft project, will help troops who may not have a Christmas tree, he said. Using a round cutting board, fishing line and colored lights, Davis creates &#8220;simplified versions of a Christmas tree&#8221; that he plans to give soldiers.

Master Sgt. Darryl Leonard, AFN Heidelberg station manager, met Davis on the softball field. At first, Leonard thought Davis was just another loud voice. But then he saw &#8220;the gentle giant&#8221; interact with soldiers and children.

The treats give Davis a chance to stop and talk, he said. Over the years, he has learned that an essential part of being a leader is sharing a part of himself with soldiers, who then have a good example to guide them should they become noncommissioned officers. He may point out corrections, but he&#8217;s really interested in hearing what the troops have to say.

He takes time to counsel soldiers, whether they are looking for tips on promotions or dealing with the everyday stresses of the military.

One soldier feeling severe depression opened up to Davis. He told the soldier how to get help. He told a pregnant soldier about the importance of saving money.

Meanwhile, his strict sense of the military combined with his good nature and humor has made Davis somewhat a local celebrity among troops.

Davis, in accepting the gifts, said he hopes to see other sergeants working hard to care for troops.