The end of the Antonio era 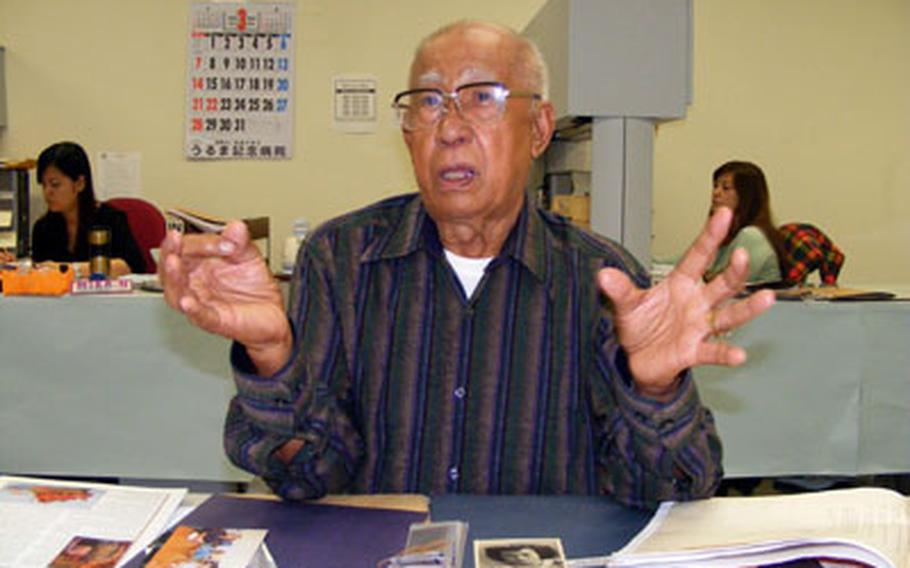 Buy Photo
Julian Antonio, 82, tells his rags-to-riches story during one of his last days as supervisor of the Army 58th Signal Battalion’s Project Support Activity on Okinawa. (David Allen/Stars and Stripes)

CAMP FOSTER, Okinawa &#8212; The talk around the Army&#8217;s 58th Signal Battalion offices these days is all about how there&#8217;s no way anyone could replace Julian Antonio.

Antonio, 82, supervisor for the battalion&#8217;s Project Support Activity, is retiring Tuesday after 64 years of federal service, all of it on Okinawa. He is believed to be the longest-serving federal employee on Okinawa.

"I&#8217;ve known Julian for 20 years now and can tell you he wrote the book on customer service," said Dave Pope, the battalion logistics officer. "Just tell him what you need and then get out of the way and let him do his thing."

He was deployed to Okinawa as part of the U.S. occupation force and landed on the island in June 1947.

"We landed at what is now Camp Kinser, but it was all jungle then," Antonio remembered.

Naha was all rubble, nearly leveled by the bombing, and most of the Okinawans he saw were "old, weak and dressed in rags."

"All they had to eat was potatoes and potato leaves, and so I started going to the mess hall and asking for anything extra for them," he said.

He also would rip his uniform so he could requisition another and give the old one to needy Okinawans. He bore them no animosity, even though Japanese soldiers had treated him harshly in the Philippines.

"I had no hard feeling for the Okinawans," Antonio said. "They were just like us. They were treated like second-class citizens by the Japanese."

When his Army enlistment was over, he returned briefly to his family home in Zambales province, between Clark Air Base and Subic Bay, in the Philippines. But there was no work and he returned to Okinawa as a civilian Army employee, a telephone lineman earning 61 cents an hour.

"After work we&#8217;d go around to the villages and play volleyball and invite [Okinawans] to our compound," he said.

At a dance in 1955, he met his future wife, Mineko, a local woman who survived the bloody Battle of Okinawa 10 years earlier by hiding in a cave in Shuri. They have six children, three of whom work for the Department of Defense on Okinawa and mainland Japan.

Remaining on Okinawa hasn&#8217;t always been easy, Antonio said. At one point in 1971 Filipinos working for the Army were told that they were being sent home and must train Okinawans to do their jobs. After Antonio sold his home and had his belongings packed and ready to be shipped, his colonel told him he was too essential to be let go.

He almost moved away again. In 1991, he decided to retire to his family home in the Philippines countryside. Mount Pinatubo ended that dream.

He was still on Okinawa when it happened and decided to stay.

"I love the people here," he said. "Like me, they rose from rags to riches."

He said he&#8217;s only retiring on doctor&#8217;s orders. He has some back problems and arthritis is slowing him down a bit.

"I&#8217;m going to miss work," he said, looking around at the young faces in his the office. "I&#8217;m hoping the command will give me a gate pass so I can come back here and visit my friends."

He apparently won&#8217;t have to persuade the battalion commander, Lt. Col. William Deagan.

"He&#8217;s awesome," Deagan said. "He can tell you all about how things have changed here in the past 60 years and where all our millions worth of assets are now &#8212; without consulting a computer."