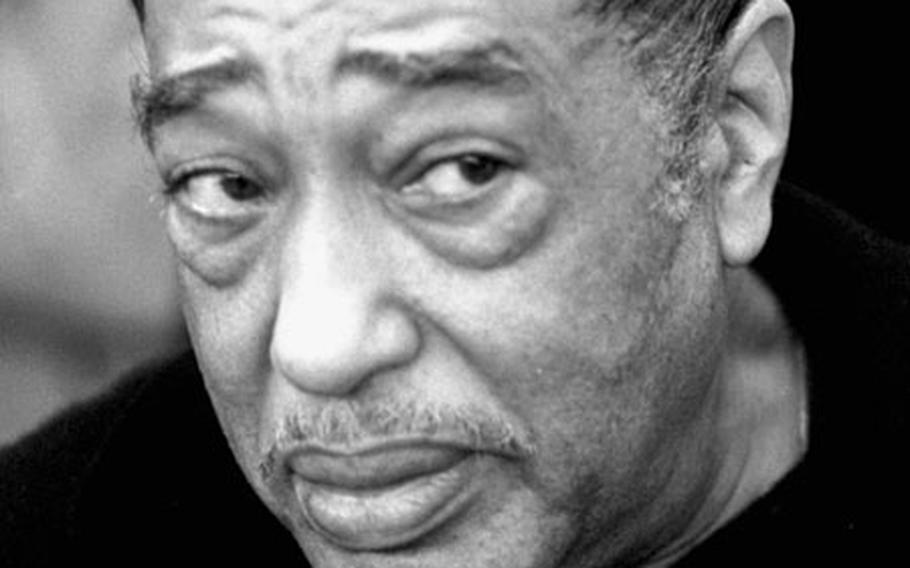 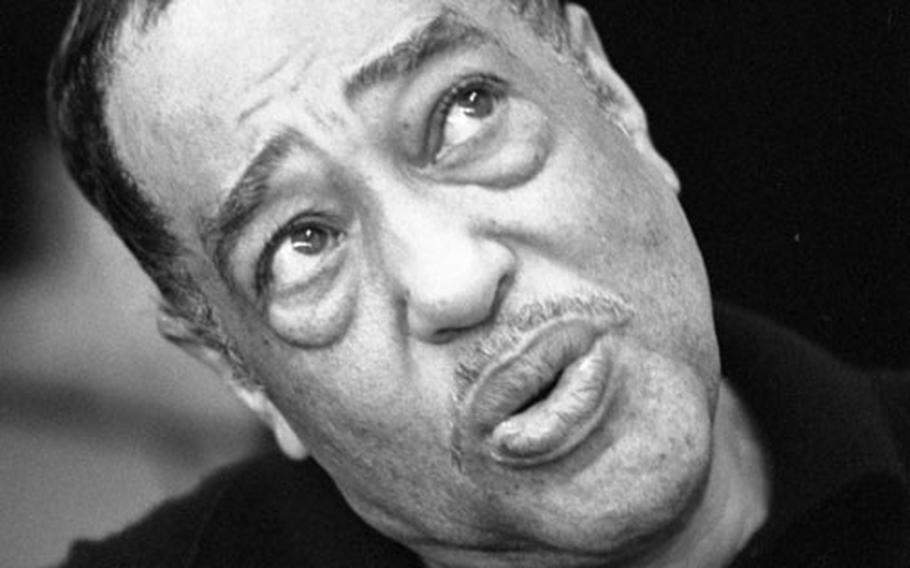 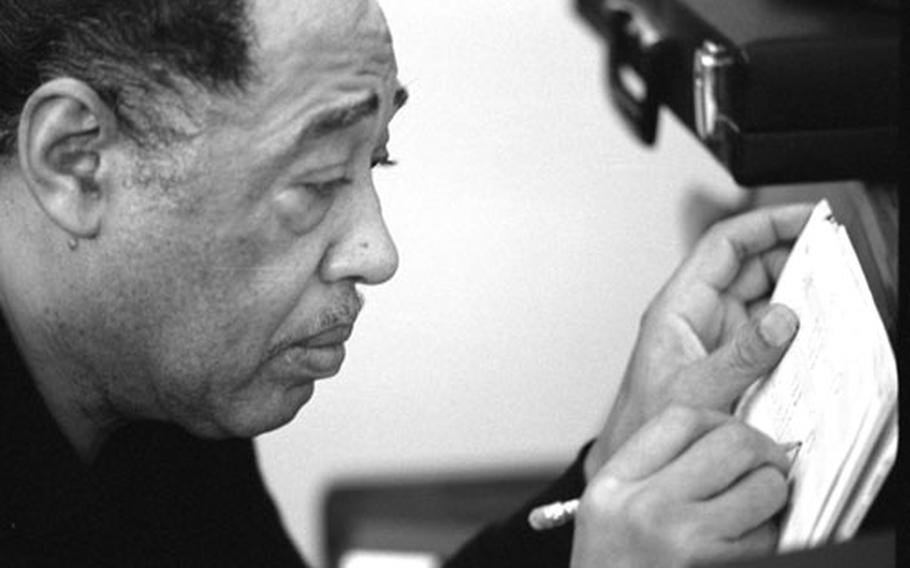 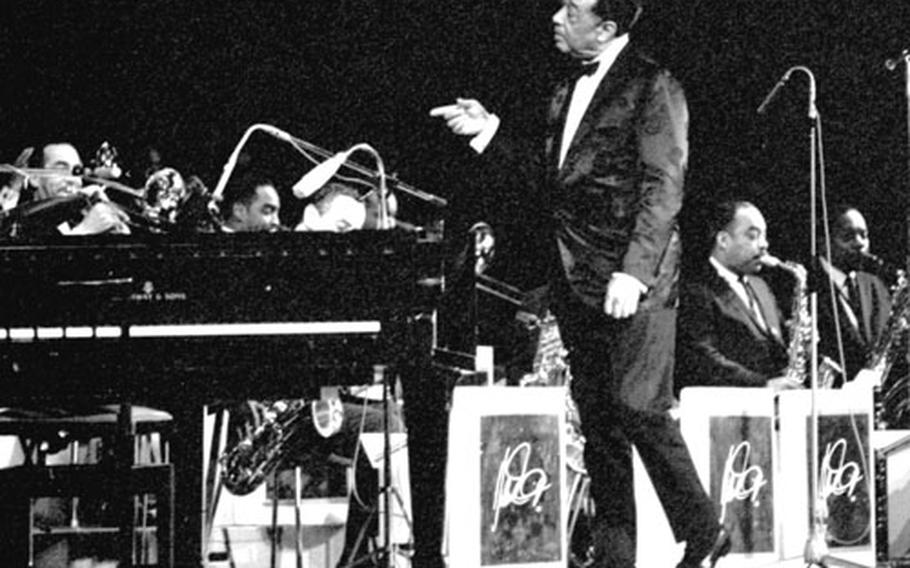 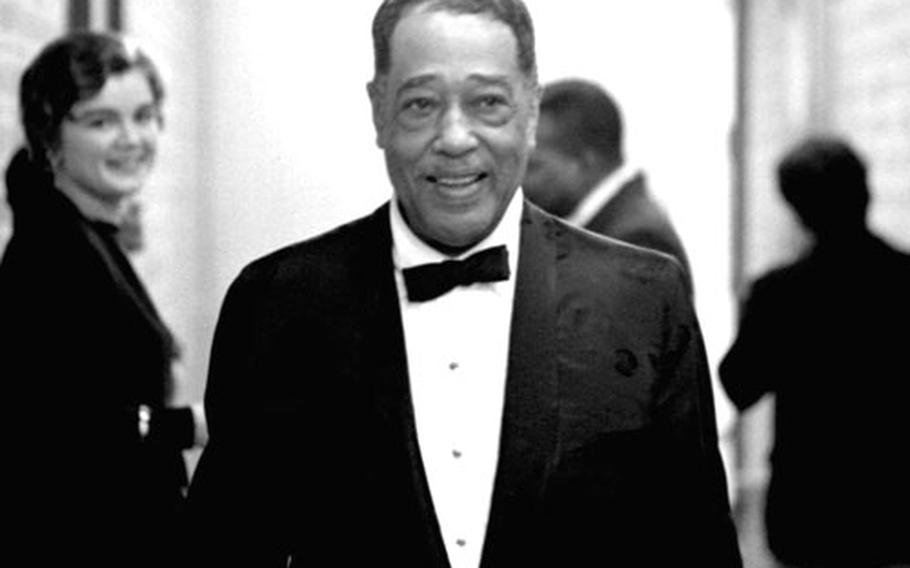 AFTER 50 years in show business, Duke Ellington is adding to his already larger-than-life image but he's doing it in, of all places, church.

And if the Duke has his way, his sacred concert, "In the Beginning, God ..." will go down in history, not only as the first four words of Genesis, but as one of his classics, ranking with "Mood Indigo." "Sophisticated Lady," "Caravan," "Take the A Train" or "Solitude."

Between shows at Frankfurt-Hoechst, one of several stops on his current European tour, the 67-year-old Duke said, "It's the most important thing I've ever done."

Though the composer-arranger-pianist has been called a jazz musician, he is something of a musical anomaly, defying easy pigeon-holing. The Duke himself likes being out there in the middle.

"I try to avoid categories," he said, trying to answer questions about his latest undertaking while composing a tune for the next night's show, munching a steak and greeting assorted hangers-on and members of his retinue as they drifted in and out of his dressing room. "It's not a 'jazz Mass'," he said emphatically. "It's a sacred concert — a very personal thing. I am very sincere in this."

Despite the controversy stirred by the efforts of Ellington and others (the Vince Guaraldi Trio followed the Duke into Grace Cathedral to record hymns in a modern idiom) to update liturgical music, modernizing the songs of the church is not a new thing. Otherwise, we still would be scaling our way through the tricky passages of Gregorian chants. Lines from popular songs of the Renaissance found their way into Masses and Bach's cantatas mirrored some of the popular dance music of his day. Haydn and Mozart lifted passages from their comic operas for use in their Masses and requiems.

So Ellington, by design or chance, has created another musical bridge from the masters of the past, with his "In the Beginning God ...", his 22-minute, sacred concert written for orchestra, choirs, solo recitation and tap dancing.

The articulate and seemingly ageless Duke said he didn't want "the roof to fall in" on him when he first performed his concert.

"I was asked by some church leaders about four years ago to do it, but had to bring myself up to it. I had to be ready for it. It wasn't just another gig (engagement, for the squares).

"What do you say ... what do you play ... how far do you go in this sort of thing? The church leaders wanted a sacred concert, but not traditional — not 15th or 16th century. They wanted the inflection, the language of today," he said.

"I wrote a piece, 'David Danced Before the Lord With All His Might' — that's a quotation from the Bible — for a Bunny Briggs tap-dancing number. Bishop (James A.) Pike was very enthusiastic about this, but I was a bit nervous about him dancing around the sanctuary.

Ellington's foray into liturgical music represents his fourth or fifth renaissance in American music, a career that got off the ground in the late 1920s when he opened at Harlem's Cotton Club, a brassy, garish night spot popular with whites going uptown slumming.

He was one of the first musicians to move jazz from smoky honky tonks to dance halls. While his music was jazz-based-like that of .Jimmie Lunceford, Fletcher Henderson and later, PauI Whiteman — it was shaped, molded, changed for big hands and a more universal appeal. He played for the "non-hippies." Ellington and his contemporaries of the 1930s formed a key link in the phase of American musical history that started with folk and gospel-based two-beat, progressed through swing, bop and cool to New Thing, polyphonic and polyrhythmic experiments.

His works lack one common ingredient of jazz — improvisation. Many of his pieces, in fact, played by musicians who have been with Ellington for decades — Johnny Hodges, Jimmy Hamilton, Cootie Williams, to name a few — have been polished and honed continually over the years.

The Ellington legend will be enhanced by his "new" career.

HOW did the San Francisco and New York congregations like his sacred music? "The reaction has been great, wonderful," he said. "We've been invited to do it many other places, which is very flattering.

"And I've been invited back to Grace Cathedral, to do a new concert next year. I've already got the theme: 'Don't you dare get on your knees and pray until you have forgiven everybody'."

But the new career is being entwined with the old — conducting his orchestra around the world for adulatory fans. On his current European tour with Ella Fitzgerald, he has played to filled houses in Frankfurt, Paris, Barcelona and other cities and is scheduled to swing through Italy. He'll edit recordings of his sacred concerts for a new album due out sometime this spring and is scheduled for a State Department-sponsored tour of Africa later in the year.

And the Duke, sometimes mercurial, sometimes vain, sometimes imperious, always great, has no plans for slowing down.