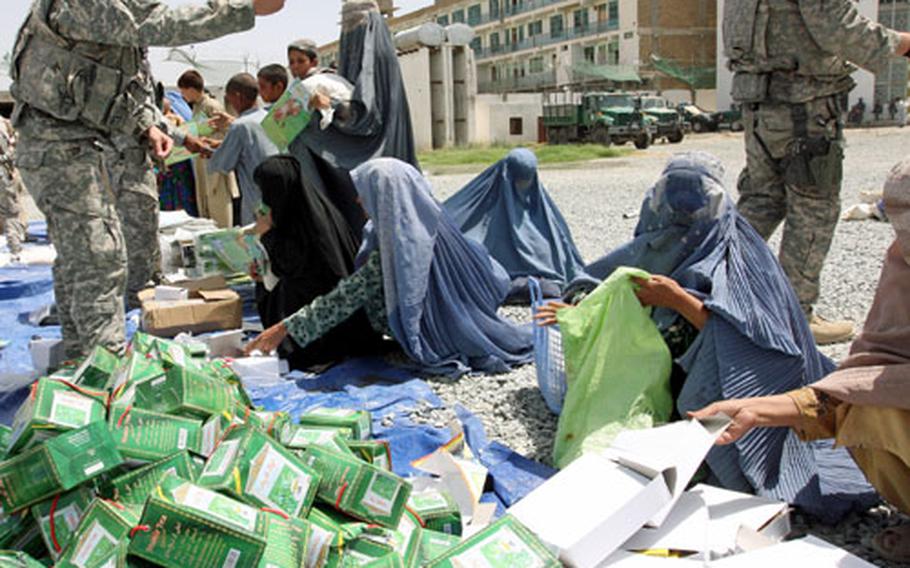 Afghan women grab coloring books and boxes of pencils as Sgt. Joe Parker, 25, of Corinth, N.Y., orders them to take only one of each item and then head for the gate during a humanitarian relief and medical aid mission in the southern city of Kandahar. But Parker’s order appears to have little effect, as the women grab whatever they can before being forced away. (Drew Brown / S&S)

KANDAHAR, Afghanistan &#8212; It was only 9:30 in the morning, but already the temperature was well past 100 degrees.

More than 500 people had already formed outside the back gate of the Afghan National Civil Order Police brigade headquarters on the western outskirts of the city, waiting under the broiling sun for the free medical care, food and other supplies that U.S. troops and Afghan police would be giving out.

"People will walk out of it being medically treated and with a few goodies in their bag," Maj. Bob Purcell, senior mentor for the 2nd ANCOP brigade, had explained earlier. "It&#8217;s outreach to the community, showing people that their local police force is trying to bring aid and assistance to them in partnership with coalition forces."

Inside, Afghan police and U.S. troops unloaded bags of flour, sugar, rice and beans from a large truck. They stacked them neatly on a blue tarp, next to buckets, cooking pots, packaged green tea and yellow galoshes for kids. They stacked book bags and boxes of colored pencils and notebooks next to a pile of sandals and a small mountain of soccer balls wrapped in plastic.

The idea was that Afghan police would let in only a small number of people at a time. Once they were searched, they would be directed toward medical clinics set up in two guard towers, one for men and one for women. After they had seen a medic, they would be directed to the front of the compound where Afghan police and U.S. troops would issue food and other supplies.

It was an orderly plan, but one that collapsed into disarray in a few hours, as the crowd waiting at the gate became unmanageable and supplies began to run out.

In many ways, the effort Monday was emblematic of the overall situation in Afghanistan, where humanitarian needs and poverty are so overwhelming that they often outstrip the capacity of U.S.-led forces to provide relief even on a limited basis.

The day started smoothly. Boys clustered around a U.S. soldier, kissing his hand, as they waited for their turn to go inside. It was a touching gesture of gratitude.

"I wish we could just provide for them all at once," said Staff Sgt. David Ditullio, of Grand Island, N.Y.

The ailing and infirm were carried in by younger men. An old man and an old woman in wheelchairs were helped through the gate by Afghan police and U.S. troops.

A man came into one of the medical clinics, complaining of pain. He had a milky left eye, and he limped. He said his back and legs were bothering him.

After an explosion 18 years ago, the man said.

Brown nodded sympathetically, and said through a translator, "Tell him I can&#8217;t fix it because it&#8217;s been too long. But I can give him something for the pain."

Brown said most of those who came in complained of aches and pains. One man had possible pneumonia. There was little he could do for the more serious cases but advise them to go to the hospital.

An hour and a half into the relief effort, only a fraction of those who waited outside the gates had been able to get inside. The crowd began to get unruly. As soon as the police would open the gate, people would push forward, trying to squeeze through.

At the supply line, things weren&#8217;t going much better. The Afghan police were supposed to be in charge, but most appeared to have given up. The task had been taken over by U.S. troops.

Spc. Anthony Strahin, of Buffalo, N.Y., stood guard over piles of shoes and soccer balls. Men, women and children fell upon the piles, clamoring for whatever they could get.

"You only get one," Strahin shouted, holding up a finger for emphasis. "Come on, now, you gotta go."

But as soon as Strahin turned his back, the Afghans grabbed extra shoes and stuffed them into their bags. A woman in a blue burqa slipped past him, and walked quickly to the pile of soccer balls. She grabbed two air pumps.

Other soldiers tried to direct people toward the front gate. But many people simply dropped off their supplies and came back for more. The more the soldiers tried to shoo them away, the more frantic they became. Soldiers became frustrated.

By noon, Purcell ordered the operation shut down for an hour to try and re-establish calm. But if anything, the Afghans were more restless after the break. Finally, U.S. forces called it a day.

"One of the things the Afghans need to work on is crowd control," Purcell said.

He gave the go-ahead for the Afghan police to take whatever supplies were left. The men scooped up the bags of flour, sugar, beans, prayer rugs and shoes.

"These people are just as poor as the ones outside," Purcell said of the police. "They&#8217;ve got nothing also."