Air Force Tech. Sgt. Jeff Morris checks with Ramstein Air Base, Germany, on the next plane due into Bashur Airfield in northeastern Iraq. Morris works in the Tanker Airlift Control Element&#39;s operations center, which tracks and manages the flow of aircraft, cargo and personnel. (Kevin Dougherty / S&S)

Air Force Tech. Sgt. Jeff Morris checks with Ramstein Air Base, Germany, on the next plane due into Bashur Airfield in northeastern Iraq. Morris works in the Tanker Airlift Control Element&#39;s operations center, which tracks and manages the flow of aircraft, cargo and personnel. (Kevin Dougherty / S&S) Air Force Staff Sgt. Erik Wood, an aerial porter for the 86th Contingency Response Group, slurps down a pouch of peaches during a break from day-time operations at Bashur Airfield in northern Iraq. (Kevin Dougherty / S&S) 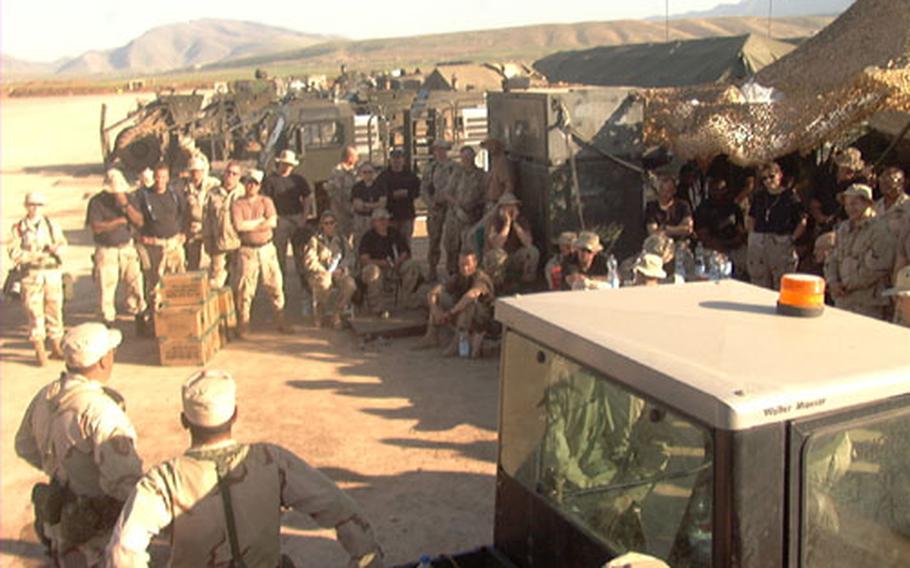 Before the day shift passes the baton to the night shift, a joint meeting is called by Air Force Lt. Col. Mike Marra, commander of the 86th Air Mobility Squadron. Marra (lower lefthand corner, leaning against vehicle) and Master Sgt. Mario Ramos brief the squadron on a range of issues, from personnel moves to the latest news on when they might be headed home to Ramstein Air Base, Germany. (Kevin Dougherty / S&S)

BASHUR AIRFIELD, Iraq &#8212; In the late afternoon, as the day shift at Bashur airfield in northern Iraq gives way to the late crew, it&#8217;s easy to tell walking around the aircraft ramp who is punching in and who is punching out.

Munn was musing that moment over the prospect of not working midnights. Nah, he indicated with a shrug of his shoulders, the graveyard shift is just fine.

Within the 86th Contingency Response Group, the banter among the airmen flies back and forth like planes at a busy airport. And in this environment, when airfield operations are running 24 hours a day, it&#8217;s only natural that one 12-hour shift ribs the other, and vice versa.

Last week, after the Army moved south and the Air Force seized the better ground, Master Sgt. Paulo DaSilva and Staff Sgt. Alex Schmidt were all aglow one sunny morning over their new &#8220;requisition.&#8221;

It seems the Army had left behind a Humvee, though it was a shell of its former body. Soldiers had stripped the damaged vehicle clean of nearly everything &#8212; wheels, seats, engine parts and all sorts of accessories to include the hood.

But to DaSilva and Schmidt, it hadn&#8217;t outlived its usefulness just yet. They grabbed a pair of forklifts and carted it over to the 24-man tent they and other day shifters were staying in. The night shift had a functional porch, with a khaki camouflage cover. &#8220;Paco&#8221; and &#8220;Schmidty&#8221; wanted a platform, too.

A moment later, Master Sgt. Gerritt McCrory, strolled by on his way to bed.

And so it goes.

About the same time, some day folks placed a rubber snake near a chair occupied by Staff Sgt. Andre Chilton. The group roared when the snake hater screeched.

Airman 1st Class Sonya Stewart is the only female aerial porter. The 20-year-old spent time on both shifts.

&#8220;You have to have an upbeat personality and a good sense of humor to work with these guys,&#8221; Stewart said.

Often they are the butt of their own jokes and quips.

&#8220;The only thing that separates us from a refugee camp is heavy equipment and e-mail,&#8221; Staff Sgt. Justin Losey said one night.

Maj. Konrad Klausner, the director of operations for the 86th Aerial Mobility Squadron, said if you move someone to the other shift &#8220;they will conform to that group.&#8221;

A few work the swing shift, allowing them to bridge the two worlds and, at times, work behind the scenes to pull pranks.

When you get past the banter and the pranks, members of one shift often compliment the other.

At Bashur, the night shift initially handled all the planes and cargo, which were only arriving under cover of darkness, while the day shift worked to set up the camp.

On occasion, the two shifts join forces to poke fun at one and all.

One afternoon last week, two staff sergeants, Todd Jackson (night) and Cliff Oney (day), made like kids and set up a crude stand not far from the aircraft taxiway. They weren&#8217;t selling cups of lemonade, though.

Most everybody got a good laugh when Klausner presented a banana to Brig. Gen. Erwin F. Lessel III, commander of the 86th Airlift Wing at Ramstein Air Base, Germany.

Bananas and other fruit had been treasured commodities in the early days of the deployment. By the time Lessel paid his charges a visit the day before Easter, bananas had become fairly abundant because of purchases on the local economy.

Wanting to give the general a token gift, Klausner looked around for something to present the general. He picked up a banana as a possible present. That was when Capt. Tim Lee issued a &#8220;triple-dog&#8221; dare to Klausner to award the boss a banana.

Klausner did it, and the general took it all in stride. A couple of days later, the general reciprocated by flying down four crates of the stuff.

Whether he knew or not, Lessel had turned the tables on the whole bunch.