The curtain is closing at Babenhausen 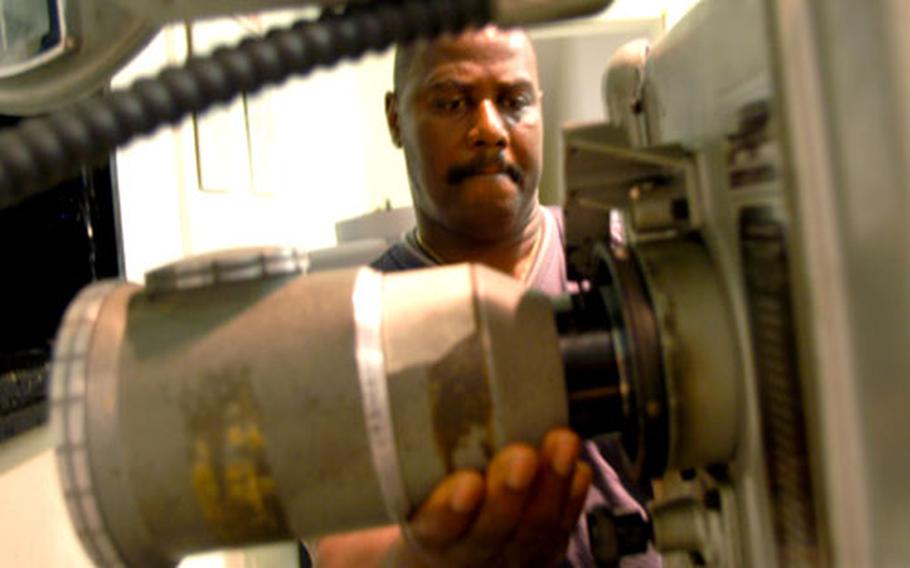 John Rhynes, a movie theater manager who has worked at Rammers Theater for more than six years, changes the lens on a projector Tuesday. The movie, "Pirates of the Caribbean: Dead Man&#39;s Chest," wasn&#39;t supposed to be shown at Babenhausen, but Rhynes showed the film as a treat for the community, which will see the theater close Friday. (Matt Millham / S&S)

John Rhynes, a movie theater manager who has worked at Rammers Theater for more than six years, changes the lens on a projector Tuesday. The movie, "Pirates of the Caribbean: Dead Man&#39;s Chest," wasn&#39;t supposed to be shown at Babenhausen, but Rhynes showed the film as a treat for the community, which will see the theater close Friday. (Matt Millham / S&S) 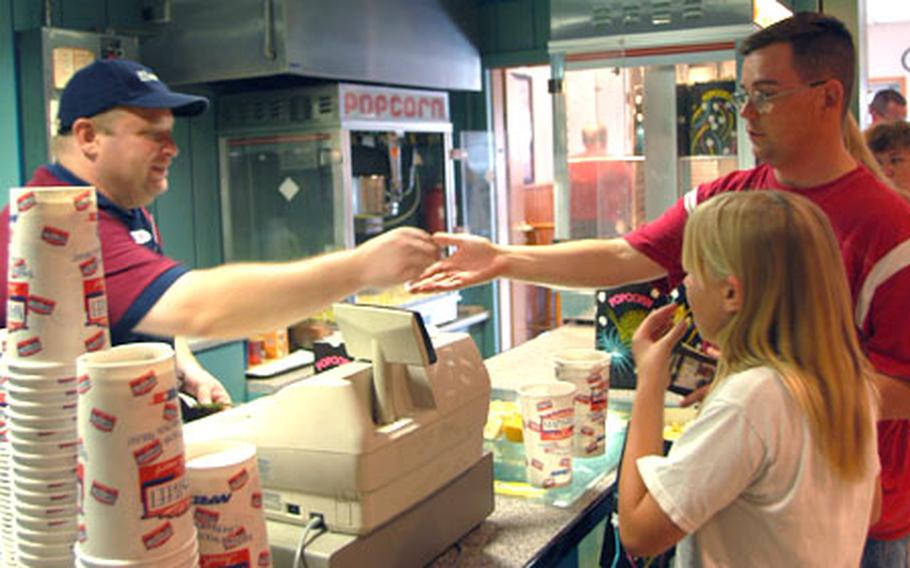 Mike Janney and his daughter Kirstyn buy goodies at Rammers Theater, which, along with other businesses at the Babenhausen post, is closing. (Matt Millham / S&S) 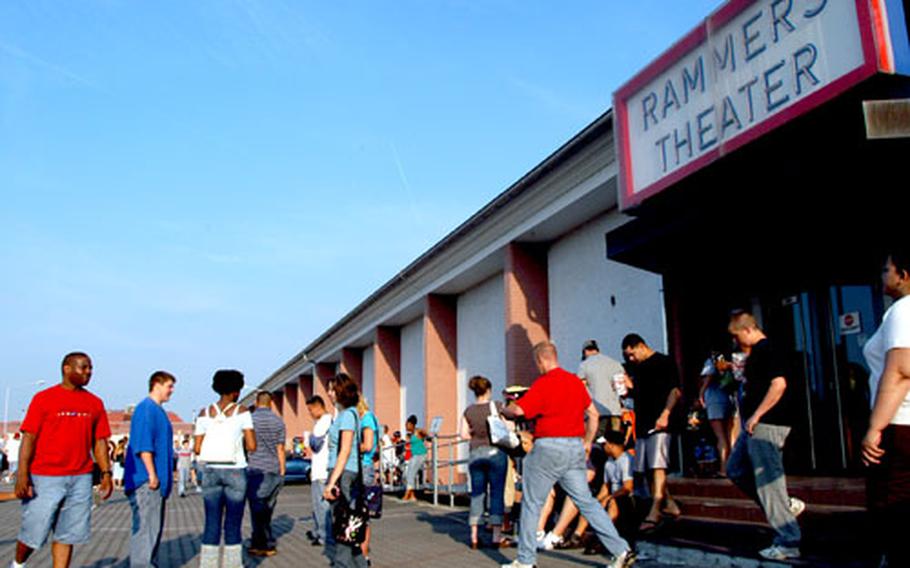 Moviegoers wait outside Rammers Theater after a fire alarm caused hundres of patrons to hoof it into the parking lot. "We&#39;re big movie people," said John Weiss, 27, who was at the theater with his wife. The couple goes to the movies once or twice a week. After the theater closes Friday, they will have to drive about a half hour to see English-language films. (Matt Millham / S&S)

BABENHAUSEN, Germany &#8212; The marquee at Rammers Theater won&#8217;t light up after today. Considering that the field artillery unit the movie theater is ostensibly named after inactivated, this seems to make sense.

But there are still hundreds of soldiers and family members left at this small post, and they are not happy to see the few remaining amenities close shop while troops are still living here.

Hours before the final credits roll today, the post&#8217;s Burger King will have slung its last burger. On Monday, the dining facility closes. Two weeks ago the dental and medical clinics shuttered their doors.

The closure of the Burger King, which was planned after the dining facility was already on the chopping block, drew protests from Maloney and Army leaders, who asked the Army and Air Force Exchange Service to keep the burger joint open until all the troops were gone.

The Burger King has lost more than $10,000 a month, said Thomas P. Gross, general manager for the Wiesbaden and Hanau consolidated exchange, which oversees the store. Hardly anybody was coming in to eat, he said.

He noted that the dining facility was closing as well and thought it was unreasonable to expect Burger King to fill its shoes.

Graham used to eat at Burger King once or twice a week, usually for breakfast. Anthony&#8217;s Pizza, which is open only weekdays for lunch, will be the only place left for troops to get prepared meals, he said.

&#8220;Soldiers who don&#8217;t have vehicles are at the biggest disadvantage,&#8221; Graham said. He routinely drives half an hour to Darmstadt or Hanau for groceries or to visit a post exchange, and his soldiers frequently bum rides off him, he said.

In addition, the post&#8217;s small commissary has drastically reduced its inventory, Graham said, adding that many people have relied heavily on the store.

By the time the dining facility closes, all troops here should be getting an allowance for food, meaning they are supposed to buy their own food, Maloney said. The only dinner option for troops without cars will be the commissary or the AAFES shoppette.

Besides the commissary, the shoppette is the only other place on post to pick up a midday snack.

The shoppette is now closed Tuesdays and Wednesdays and opens at 11 a.m. the rest of the week. It closes at 7 p.m. weekdays and 5 p.m. on weekends.

Jayme Loppnow, a spokesman for the base, confirmed that officials have not said the base will close and added that unit inactivations have nothing to do with base closures.

In the meantime, the commissary and bank plan to stay open until the last soldiers are gone from the post, as will the post office and shoppette. But the list of what is staying pales in comparison to the list of what has closed or will close soon.

To cheer up the shrinking community, John Rhynes, one of the movie theater managers, squeezed in a showing of &#8220;Pirates of the Caribbean: Dead Man&#8217;s Chest&#8221; on Tuesday, even though the theater wasn&#8217;t scheduled to show a film that day. He has worked at the theater for more than six years and knows it&#8217;s one of the few things left to entertain troops here.