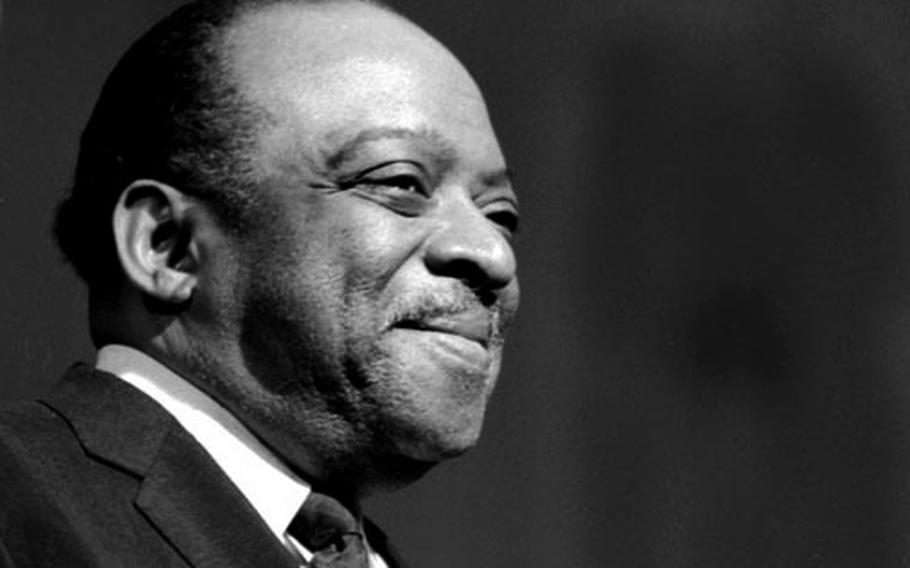 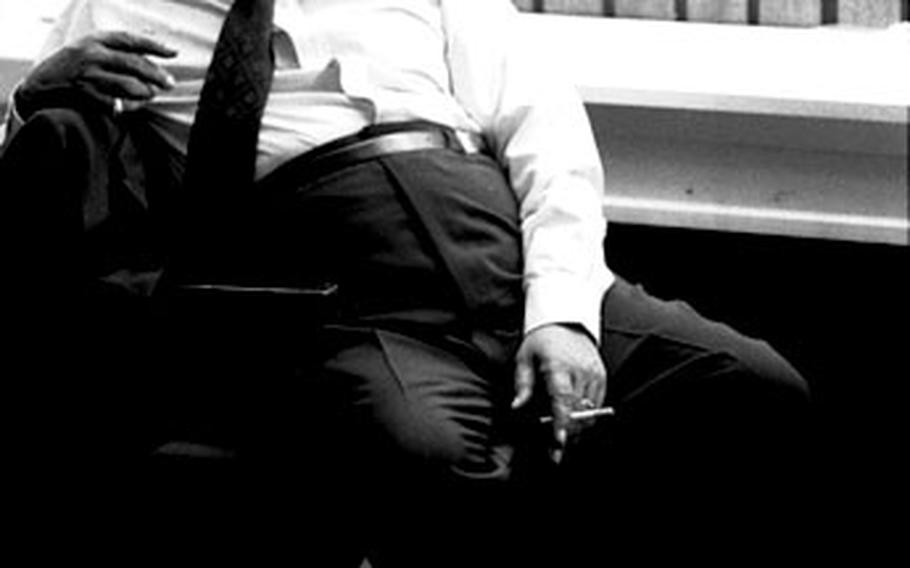 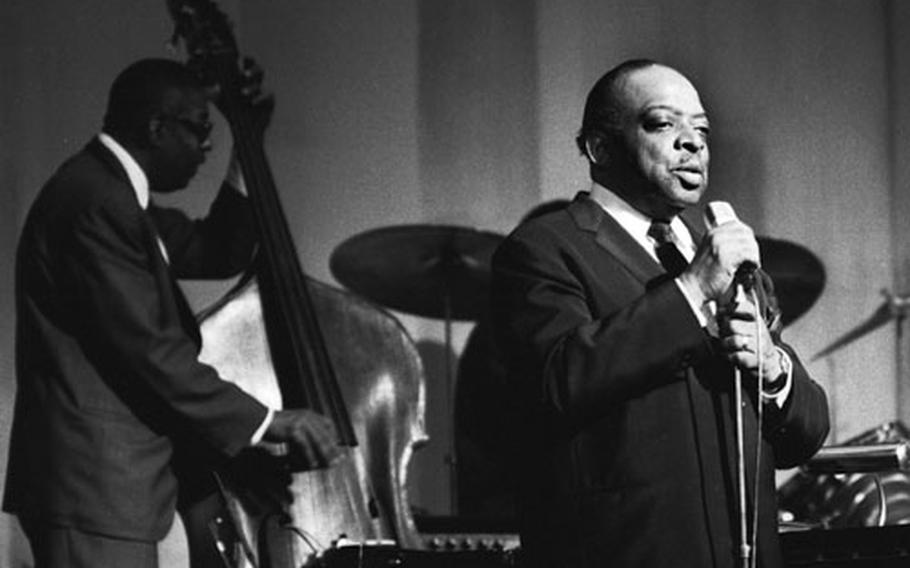 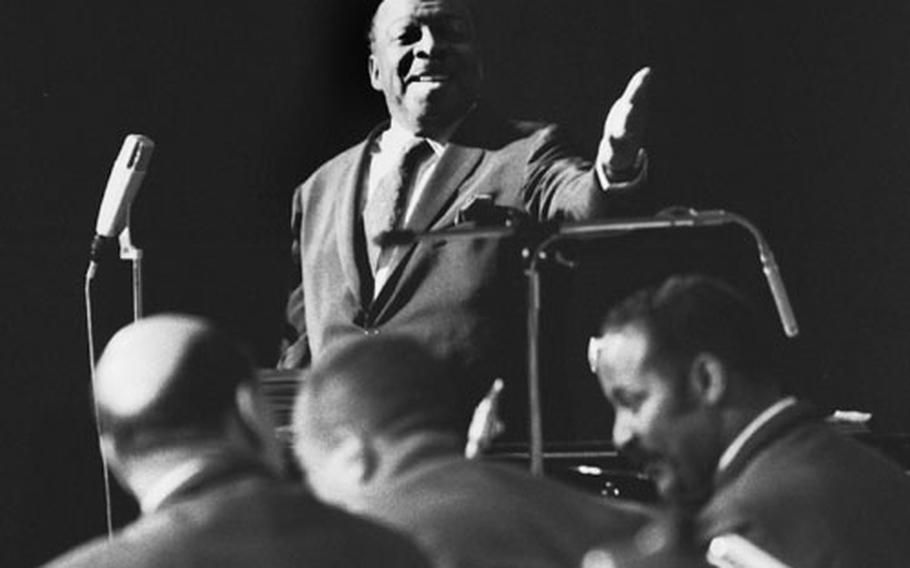 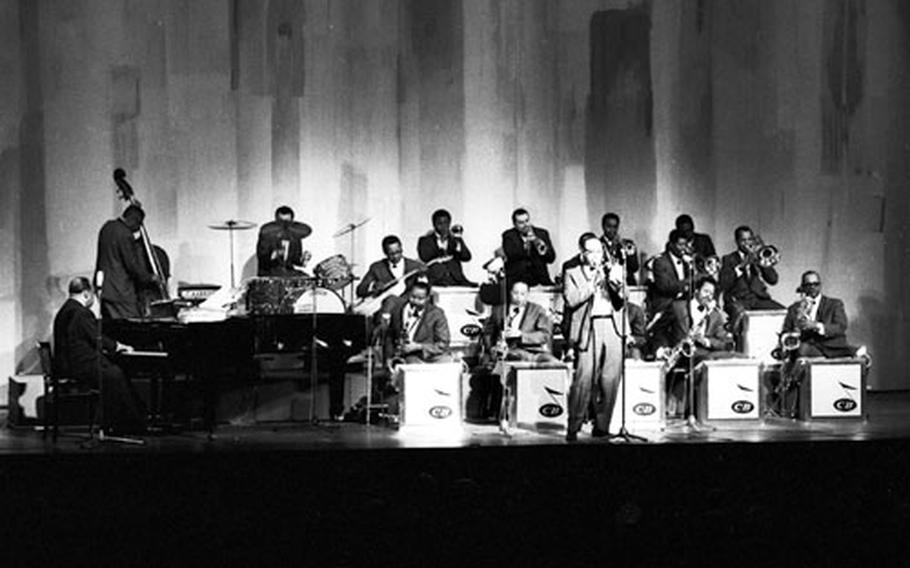 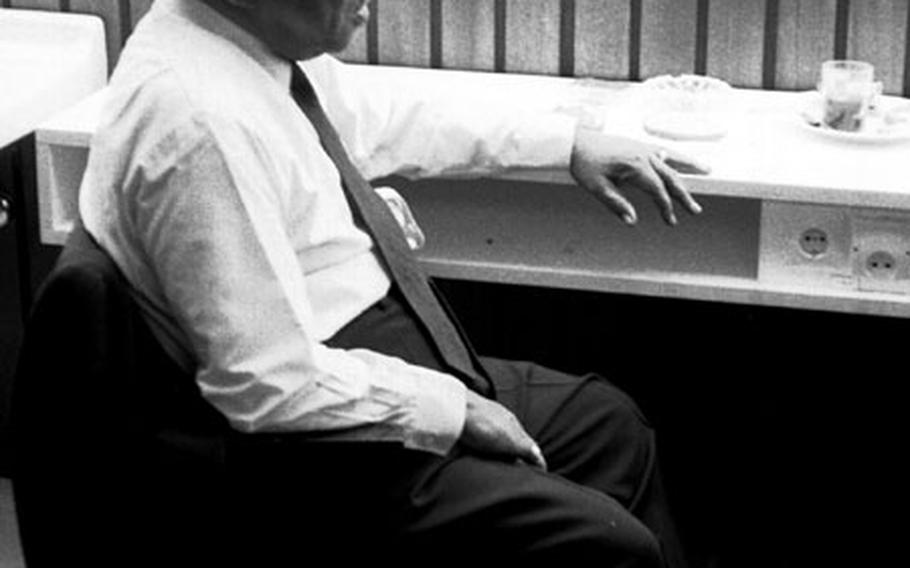 A CONCERT APPEARANCE by the Count Basie Band is a sort of minor miracle in defiance of the caprice of show business. This is his 34th year as a bandleader, and in the style that won him fame almost two generations ago his group continues to turn out the smooth, walloping melodies that are unmistakably "the Basie sound."

Count Basie (his real first name is William; he got the "Count" back in Kansas City when an announcer pointed out that plain old Bill Basie was hardly fit company for Earl Hines and Duke Ellington and on the spot dubbed him royally) is admired today by an immense audience that recognizes him as a timeless titan of jazz. His European concerts may not generate the whistling, stomping reaction of his American performances, but he is nonetheless enthusiastically admired.

Basie, born in Red Bank, N.J., 64 years ago, arrived in Kansas City in the late '20s and was stranded there when the vaudeville show with which he was traveling folded. He found a job playing piano to accompany the silent films of the era ("I got a lot of good experience in that job," he later said).

After a stint in the flicker world, he joined Walter Page's Blue Devils and while playing with the group met Jimmy Rushing, the fabulous blues singer "who for my money has never had an equal."

He later joined Benny Moten's group, playing "third piano" behind Benny and his brother who squeezed an accordion.

With Moten he met many of the players who were later to form the nucleus of his own group, but he did not, despite many tales to the contrary, take over the Moten band when the leader died in 1935. The Moten group played on for several months under brother Bus Moten, then folded. From the musicians freed, Basie formed his first outfit.

"I don't mind saying it was a mad scuffle with that band," said Basie later.

IT WAS THANKS to John Hammond, the jazz buff, and Benny Goodman that Basie's group was signed by a major booking agency and finally brought to New York. The rest is jazz history. Of course, that history didn't just happen; there were long hours of work, of rehearsal, of careful thought involved. Looking back, Basie was to say:

"Years ago when I was using nine pieces ... we had worked together a long while. We got so we coordinated every move, every solo perfectly ...

"Now — and this is the point I want understood most — I wanted my 15-piece band to work together just like those nine pieces did ... I wanted those four trumpets and three trombones to bite with real guts. BUT I wanted that bite to be just as tasty and subtle as if it were the three brass I used to use ... I said the minute the brass got out of hand and blared and screeched instead of making every note mean something there'd be some changes made."

Today Basie is still making every note "mean something." With an amiable, easy-going stage presence, he leads his band from the piano by shuffling an assortment of simple, compelling musical phrases (or riffs) and flinging them at the band. The result may be a lemony clarinet solo, a billowing of trumpets, a braying saxophone or a full orchestral explosion.

Whatever comes out in honey-and-vinegar tones will show an abundance of excitement, warmth, wit and life.

Basie meets the press reluctantly and rarely allows an interview. He explains that his reticence is necessarily self-imposed — "I'm writing a book, so I can't say too much," is his usual reply.

Basie's music can't be easily categorized in any of jazz' usual historic pigenholes — it's a sort of hybrid with an ear cocked to the conservatory as well as the street. Over the years his style has remained fundamentally unchanged — music played with a relaxed but powerful beat, easy to dance to.

The qualities that established the Basie band in the early days — his simple, somewhat elliptical piano style which leaves handy holes in the left hand figures for the bass to fill in, and a rhythm section that could fill those holes smoothly — are the qualities that propel it today.

Basie's music moves. It doesn't just live and breathe — it shouts and struts with conviction. He is a masterful orchestrator with a deep feeling for soaring brass and infectious, pulsating rhythms.

The Basie band of the late '30s was one of the greatest of all big jazz bands. Through the '40s, despite an occasional loss of an outstanding soloist, Basie maintained a band whose contagious rhythmic pulse and team spirit were matched by a succession of inspired soloists.

TODAY THE Count identifies himself with "mainstream" jazz — a movement by some musicians to hew to the basic principles of the art as they see them. Mainstream is a reaction against the extremes of rock 'n' roll and its crude descendants, against the over-refined, self-consciousness of the "cool" school, against the "free-form" atonality of the more radical jazzmen.

(A trademark of the early Basie band was the use of "head" arrangements — arrangements in which only a certain phrase was known to all the musicians. The bulk of the music was straight out of the "head," improvised on the spot to fit the mood and the phrase. His famed theme, "One O'Clock Jump," was a head piece and was so named on the spur of the moment during a broadcast when the hour was near 1 a.m.)

BASIE doesn't deny his current move toward pop songs. "Audiences change," he said. "We're playing to a generation that wasn't even born when we began, and they appreciate another style. So we try to play music that they will like."

Fortunately, there are those who still enjoy such efforts as "Doggin' Around," "Blues for Eileen," "Cherokee," and "April in Paris." And happily soloists such as Eddie (Lockjaw) Davis, Harlan Floyd, Eric Dixon, Harold Jones and Richard Boone help retain the original Kansas City flavor.

Although Basie's style is basically changed, it doesn't mean that he hasn't been aware of what has been going on in jazz.

"I think all the guys like Bird (Charlie Parker) and Dizzy (Gillespie) contributed so much to making the steps of progress of modern music. It was the finest thing in the world that could happen because everything has to change ... It must be wonderful to be pioneers like they are ..."