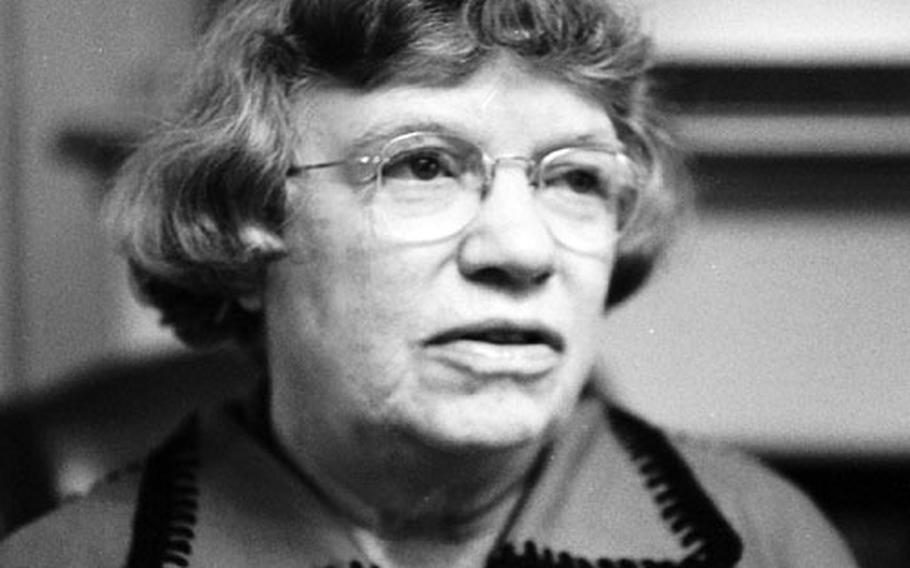 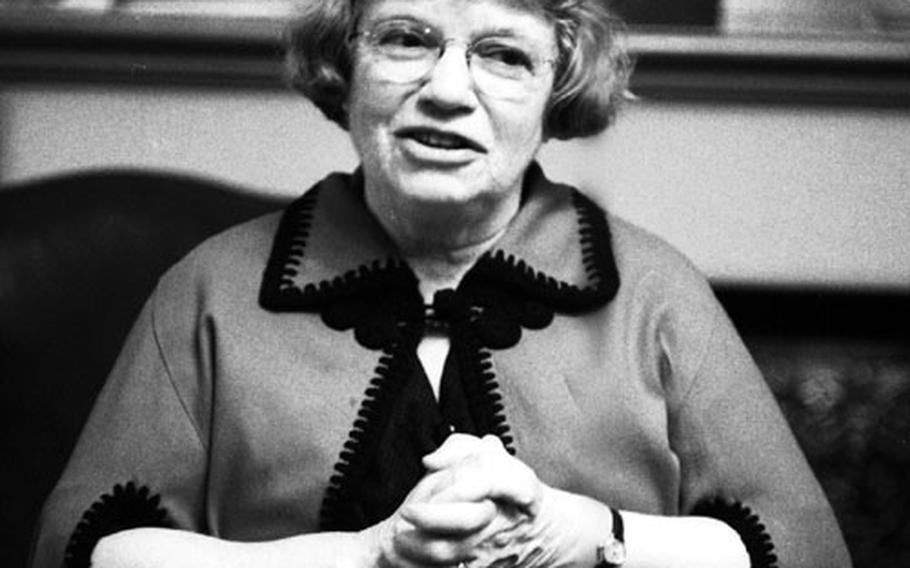 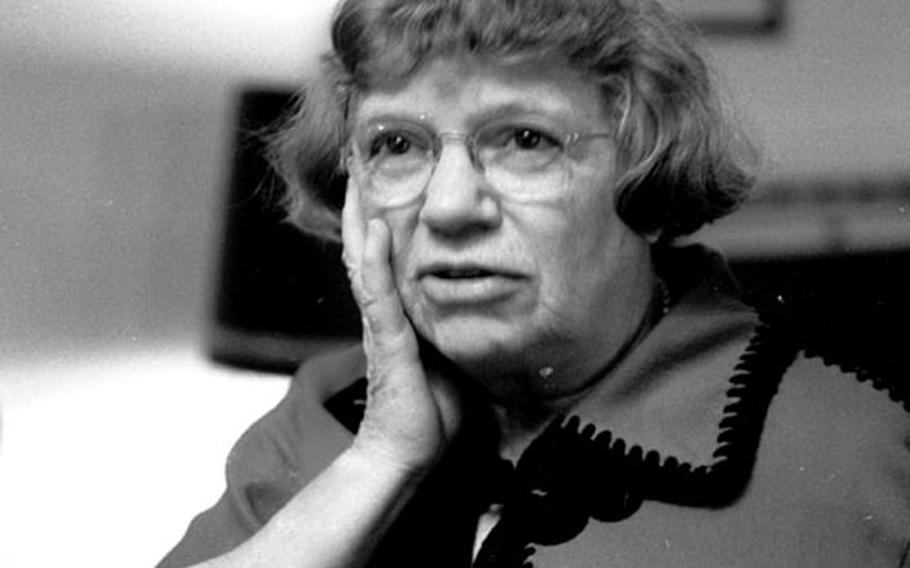 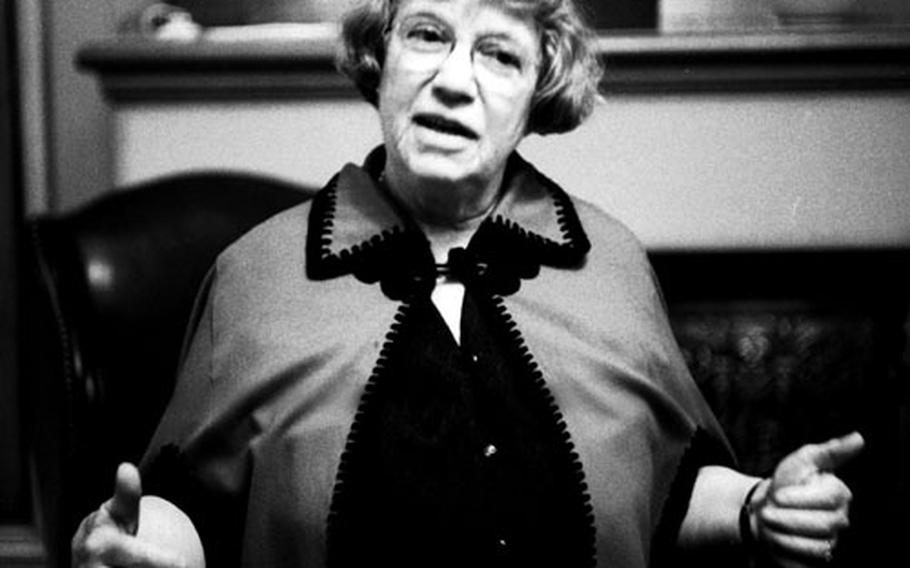 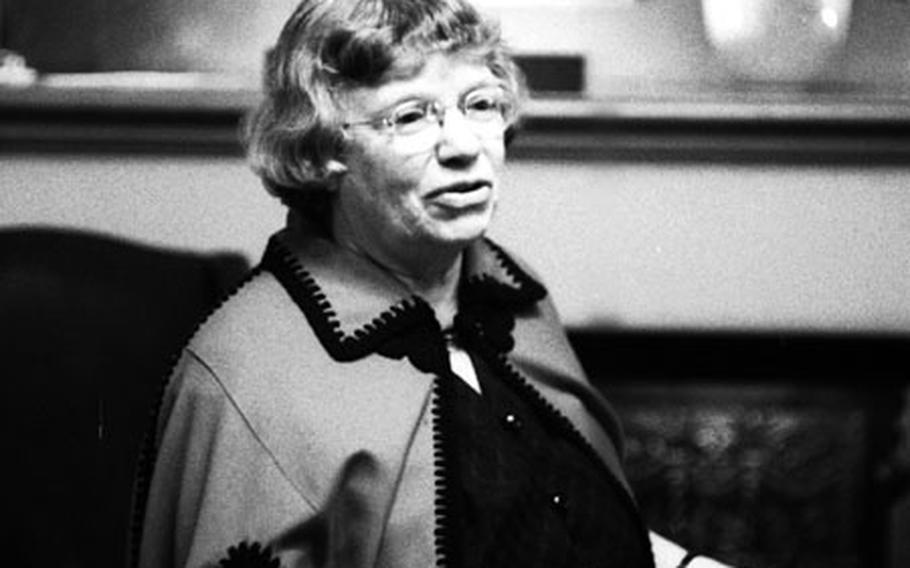 Buy Photo
Anthropologist Margaret Mead, during a May, 1972 press conference at the Europa Hotel in Heidelberg, Germany. (Charles Dees/Stars and Stripes)

DR. MARGARET MEAD &mdash; who has been called everything from totally irresponsible and worse to an exuberant humanist &mdash; gave vent to a number of her controversial views in Heidelberg recently.

At a press conference in the Europa Hotel, the peppery grand old lady of American anthropology talked of harm done by laws against the use of marijuana, of the problems of black and white relations in America and the need for "fewer and better parents."

She believes that the latter is the solution to the population explosion problem ... that it and a more enlightened view of parenthood go hand in hand.

"IF THERE weren't a population explosion," she said, "the state would forbid research on contraceptives and would forbid their distribution."

She said that since this isn't so, young people now have the privilege to marry without having children which she feels is as it should be.

"Marriage contracts are fine for people who aren't having children, but then when they have children, I think they should have another kind of contract &mdash; and that's a contract to stay around until the children are grown."

While in Heidelberg to address the commencement ceremonies of the University of Maryland's European Division, Dr. Mead said she is hoping for a new "climate of opinion which instead of making everybody ask `Why haven't you had a baby?' will make them say, 'Oh, you're going to have a child are you? What makes you think you're ready to have one?' "

Currently curator emeritus of ethnology at the American Museum of Natural History and adjunct professor of anthropology at Columbia University, Dr. Mead's illustrious career has spanned almost 50 years of research, publication and teaching.The 71-year-old scientist first came to national attention in 1928 with the publication of her now-famous book "Coming of Age in Samoa."

AMONG HER books are: "Male and Female," "Sex and Temperament in Three Primitive Societies," and "Culture and Commitment &mdash; A Study of the Generation Gap."

It was her stand on marijuana in 1969 that caused her to be labeled irresponsible &mdash; "a dirty old lady" &mdash; by Florida Gov. Claude Kirk Jr. She had called for the legalization of marijuana for persons over 16 years of age. Kirk said the call was indicative of a dangerous trend toward total permissiveness.

A specialist in what she describes as "conditioning of the social personalities of both sexes," she also is known for her work in such subjects as comparative child psychology and cross-cultural communication.

CONTINUING with her views on marriage and parenthood, Dr. Mead said that the reason for America's high divorce rate is "because we ask impossible things of young parents.

"We take young people too young to be parents and tuck them into a strange suburb and make them responsible for everything," she said.

According to Dr. Mead, when people speak of the demise of the traditional marriage "what they mean is the suburban type of marriage of the past 25 years.

"Most Americans can think only about 25 years back &mdash; and then they moan because everything's changed.

"I hope our suburban marriages have suffered a permanent demise and that we will return to living in communities where there are three and four generations, where people are near their neighbors."

She said this is also "the answer" to gaining equal opportunities for men and women in the professions.

THE ANSWER is to get out of these little boxes we've been living in, get rid of the nuclear families and move back into genuine neighborhoods, the sort people used to live in, where there are people you know next door and down the street, where grandmother can live around the corner and there's somebody to help.

"The answer is not in trying to make the man as dependent on these little boxes of homes as his wife is now, but in getting them both out of the boxes and back into real communities."

She said, she thinks the men should help in the home as their duty and not just be kind.

"Women aren't paid as well as men today. They aren't given an opportunity in executive or administrative jobs. They're exploited," she said.

According to Dr. Mead, though, the fault is not with the men alone &mdash; people act the way they do because society is the way it is.

Does she see a trend toward a more equal division of labor between husband and wife?

"I think so," she answered, "but is still takes a bit of trying to make men do things."

Turning to other subjects, Dr. Mead explained her stand on marijuana.

"The laws against it should never have been passed and because they were passed we've exposed millions of young people to a kind of temptation they never should have been exposed to.

"I WOULD like to repeal the law against the use of marijuana, not legalize it," she said. "You must never legalize anything anybody disagrees with, but you should repeal laws that should never have been passed."

She thinks all laws in the United States that people differ on "ethically and importantly" should be repealed.

"The laws against abortion never should have been passed, she said, "because part of the American people believe abortion is wrong and part of them believe it is right.

"How can people who don't believe in abortion vote for a liberalized law? They can't but they can vote to repeal a law that is doing harm."

As to equality for blacks in the United States, Dr. Mead believes "we have a long way to go."

"We have a large black population that is disadvantaged in education and health," she said.

"It takes a long time to catch up when it comes to the effects of malnutrition &mdash; the effects of being barred from enjoying one's own identity. It takes some time to overcome the handicaps."

AS SHE SEES it, the important thing that has happened in the United States in the last few years along these lines is the growing sense of black identity.

As examples, she cites the fact that black people no longer believe they have to have their hair straightened, and black children are no longer forced to play with white dolls.

She believes that both integration and black power are needed.

"Integration is about individuals," she said. "It's about giving an individual doctor who's black the right to be on a medical staff of a hospital."

Black power, or ethnic identity, she sees as more the group thing.

"They're both necessary," she said. "Integration of individuals and growth of a sense of community are both essential. They're not in opposition. People talk as if they were, but they aren't."