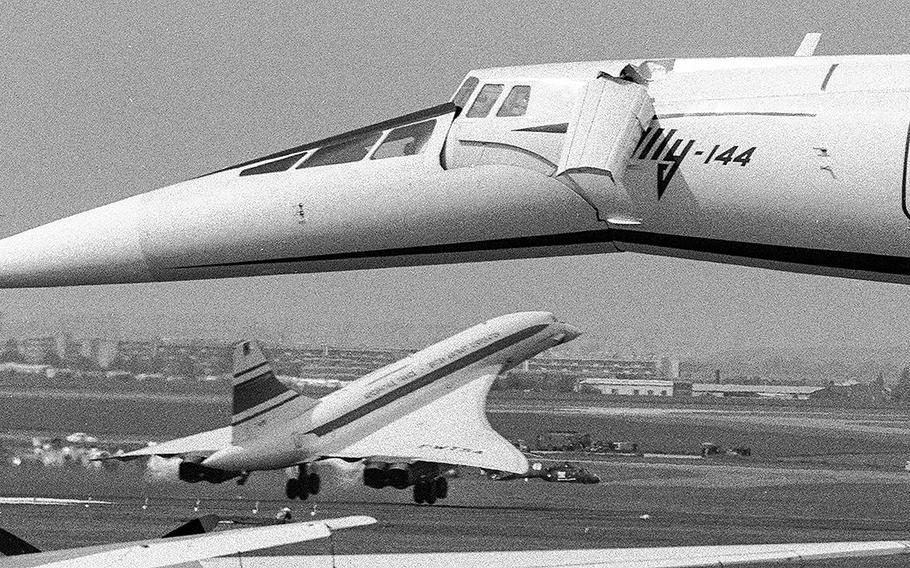 Buy Photo
The British-French Concorde prototype is framed by its rival, the Soviet Tu-144, as it takes off from Paris' Le Bourget Airport in June, 1973. Hours later the Tu-144 crashed during its own demonstration flight, killing all six people on board and eight on the ground in a nearby town. (Red Grandy/Stars and Stripes)

Editor's note: While compiling his memoirs several years ago, Stars and Stripes photographer Red Grandy (1922-2018) wrote this account of his coverage of the crash of the Soviet Tu-144 supersonic passenger plane at the 1973 Paris Air Show. Grandy managed to sneak out of the airport, which was locked down immediately after the crash, and take photos of the destruction in the nearby town of Goussainville.

There seemed to be no end to bad luck/good luck stories while working as a photographer for the Stars and Stripes.

I began to think that I was a jinx by covering the Paris Air Show held every 2 years at the Le Bourget airfield just north of the city. Every time I covered it somebody crashed.

The writer assigned to cover the June '73 event insisted that it was best to just cover the first three days of the week long event. I told him that from experience, the last three days were the best. Consequently, we crossed paths in the middle of the week as he returned while I was en route to Paris.

During the following two days I sent a picture page and several news shots to the newspaper and prepared for the final Sunday show.

I called the home office and told them that I would only be sending one news shot via Wirephoto from the Paris United Press International bureau to wrap up the event on Sunday.

Since nothing really gets going until the afternoon, I had coffee au lait and croissants in my room and then leisurely headed for the air show at 11:00. On arriving I tried to enter the parking lot that had been reserved for the press all week long. A French gendarme explained that on this day the lot was reserved for VIPs only and that I would have to enter the main gate and park with the some 300,000 spectators on the airfield.

I was allowed through the gate to a gendarme who was checking for tickets. As I fumbled for my special air show press pass I realized that I had left it at the hotel. The officer was not sure of how to direct me back to the Paris highway, but pointed the direction between some hangars. Following this course I suddenly came upon an inside gate to the VIP parking lot I had been denied entrance to previously. There was no guard there, so I drove in and parked. To heck with driving all the way back to Paris for my pass, I'd just buy a ticket.

As I got my camera equipment from the trunk of the car, I spotted George Sterling through the fence as he walked toward the Northrop chalet. I called him over to borrow his pass. He had an extra one in his pocket so I used it to get through the gate and joined him in the chalet. George was chief of public relations for Northrop Aircraft.

Over coffee with George I decided to use the U.S. Navy acrobatic team, the Blue Angels, for the news shot unless something better came along. George introduced me to the Blue Angels' team leader and he explained the maneuvers they would be making at 3:00 PM.

Then I framed the British-French supersonic Concorde taking off under the nose of the Russian copy of it called the TU-144. In the west it was derisively called the "Concordsky" It was my first photo of the day.

The Concorde made a slow pass over the field and then it was the Russian's turn to duplicate or exceed that maneuver. Leaning over the fence in front of the Northrop Chalet I watched the "Concordsky" pre-flight on the runway and the sound of it, compared to the Concorde, was alarming. They looked like clones, but next to the Concorde, it sounded like a Model T Ford compared to a V-B engine. This really got my interest. As it made its downwind pass I took what was going to be the last one made of this sleek stork-like state of the art supersonic jet.

It could barely be seen in the grey haze through my 800mm lens as it turned and approached the runway for its slow pass, about seven miles away. Then suddenly I saw dark small silhouettes of pieces bursting around where the plane had been, followed by a huge cloud of black smoke. As I kept shooting, a dreadful dirge-like moan rose from the some 300,000 spectators as the sound of the explosion reached the stadium.

Now what to do? I closed my eyes and bowed over the fence to think. I could take the coward's way out and send a picture of the pall of black smoke or take the stressful way and try to get to the scene of the accident. I had to give it a shot.

Hurrying to the parking lot I got the car out onto the highway and drove in the direction of the tower of smoke. [At a certain point] I could not enter. I went back a couple of blocks, turned right and went through a gravel pit, then across a field until I came to another road leading into town from the north. Knowing that I would probably be blocked in later if I got any closer, I parked the car and tried to hitch hike with a French Citroen stopped at a traffic light. The driver told me "Non," but I opened the rear door and got in anyway. He just threw up his hands and drove me almost into town.

It was perfect for a long shot of the burning part of the crash scene. As I got closer I shot parts of the plane on the ground, a seat with belt hanging from a power line, destroyed houses and distraught townsfolk carrying away belongings etc. What I couldn't understand was where were all the press photographers and reporters who should have been there, flocking to the scene. It was eerie, I seemed to be the only one there.

I quickly shot three rolls of film and then hustled back to my car. It was a clear shot to the four-lane autoroute past the airfield toward Paris and my destination, the united Press Bureau. But my hopes dimmed a few seconds later as a gendarme forced me to pull off to the side and park with all the tourists to keep the highway clear for police and ambulances. There's no way to reason with a gendarme, he had his orders. Here I was with this hot film, but locked in. Then in the rear view mirror I saw an ambulance approaching with 1ights flashing. As soon as it passed I pulled out behind it blew past the gendarme as he watched it go by. As I passed by Le Bourget airfield the Navy Blue Angels were just putting on their show. The Russians had upstaged them.

From there on it would be a piece of cake until I reached the Champs Elysees. There I knew I would have to park the car and take a taxi to the congested area of the UPI office. There was never a parking space there. Circling the Arc de Triomphe I got a taxi to follow me to a parking place. He then took me to the UPI office. 4

Ray Paganelli was the Paris UPI Bureau Chief and when he saw me walk in he couldn't believe it. I had called him earlier about transmitting my photo of the Blue Angels via UPI to Stars and Stripes. He said he would be painting his house but no problem. However, the TU-144 plane crash had forced him to leave his paint job and get to his office in a hurry.

His first question was, "How in hell did you get off the airfield? Then he explained that the French had locked the spectator gates to the airfield and all the world press were still locked in there. This explained why I was alone at the crash site and two hours ahead of any other photographers. His next question was could he please use my photos on the international Wirephoto network?

I agreed that he could use my photos if he would first transmit them to my office at the stars and stripes in Darmstadt. He was more than happy to do this as all photographers were still confined to the airfield. He then proceeded to send the only photos of the disaster out on the international network all over the world.

The news desk at Stars and Stripes could not believe that we had these exclusive photos, especially the reporter, who probably missed the biggest news story of his career. They were not alone. How could the apparent bad luck of forgetting my press pass give me this big break?

Who really knows? As the French say, "C'est la vie!"