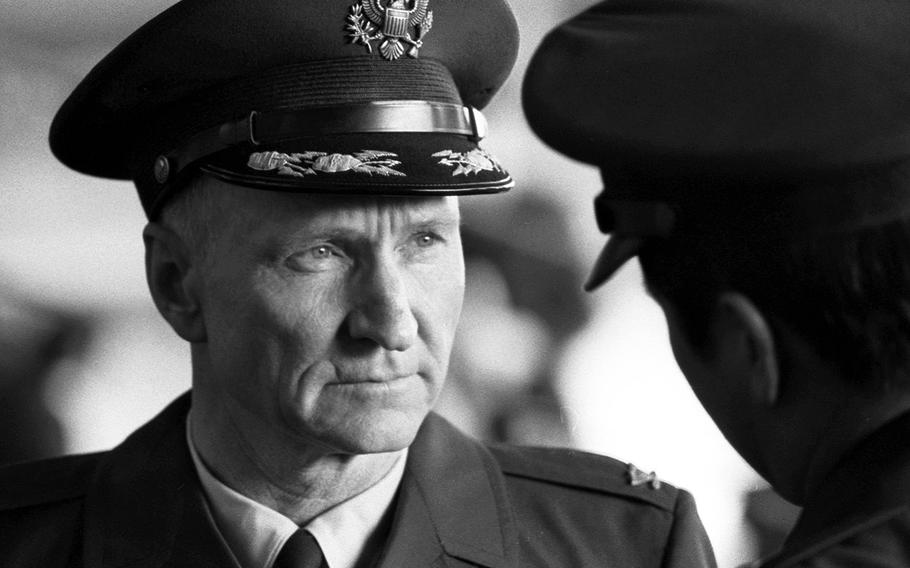 Col. Gail S. Halvorsen, the famed "Candy Bomber" of the Berlin airlift, during his farewell ceremony at Tempelhof Airport in February, 1974. (Regis Bossu/Stars and Stripes)

Col. Gail S. Halvorsen, the famed "Candy Bomber" of the Berlin airlift, during his farewell ceremony at Tempelhof Airport in February, 1974. (Regis Bossu/Stars and Stripes) 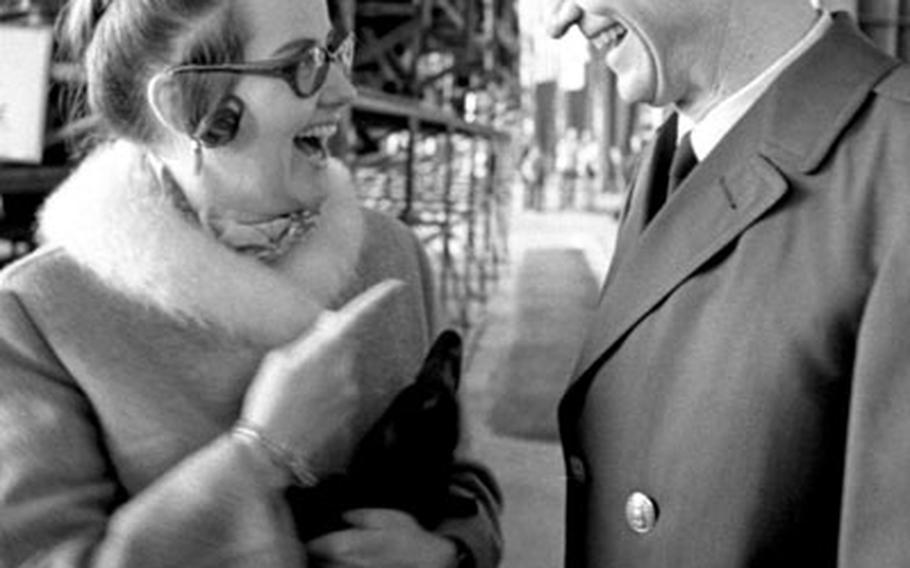 BERLIN — At Tempelhof Airport here, amid rows of waving flags, the stirring sounds of martial music and rows of marching airmen, Mercedes Wild thought back to leaner, sterner times.

The year was 1948. She was 7 years old. She liked to play in the front yard with her white chickens.

Planes were always flying over the house. These planes, the planes that kept Berlin alive during the 13-month-long Berlin blockade, didn't mean much to her, though sometimes the chickens would stop their pecking and look up when one roared over.

But one day little white specks fell from a plane as it passed over the house. The specks were parachutes made from bedsheets. Attached to each parachute was a packet of candy.

Day after day, the little parachutes dropped from the plane and fluttered down on the more fortunate children.

She decided to write the candy bomber, then-1st Lt. Gail S. Halvorsen, and explain her plight. The letter read about like this:

"The planes are always flying over my house, but I haven't gotten any candy. Could you please drop some candy over my house. You'll recognize it by the white chickens in the yard, sincerely, Mercedes."

In the return mail she received a reply from Lt. Halvorsen explaining that he wasn't sure he would be able to recognize her house so he was sending a packet of candy with the letter.

As Mercedes Wild was explaining her story at Tempelhof Airport, Halvorsen, now a colonel and outgoing Tempelhof commander, came up to greet her. He shook her hand and they talked of all the children who had received parachuted candy. He turned to her husband, Peter, to say, "But she's the best-looking one."

The Wilds were among 400 people gathered at Tempelhof to wish Halvorsen goodby. Halvorsen, who has served as the Tempelhof commander since February 1970, is being reassigned as the inspector general of the Ogden Air Material Area at Hill Air Force Base, Utah.