The battle for hearts and intel in Kirkuk 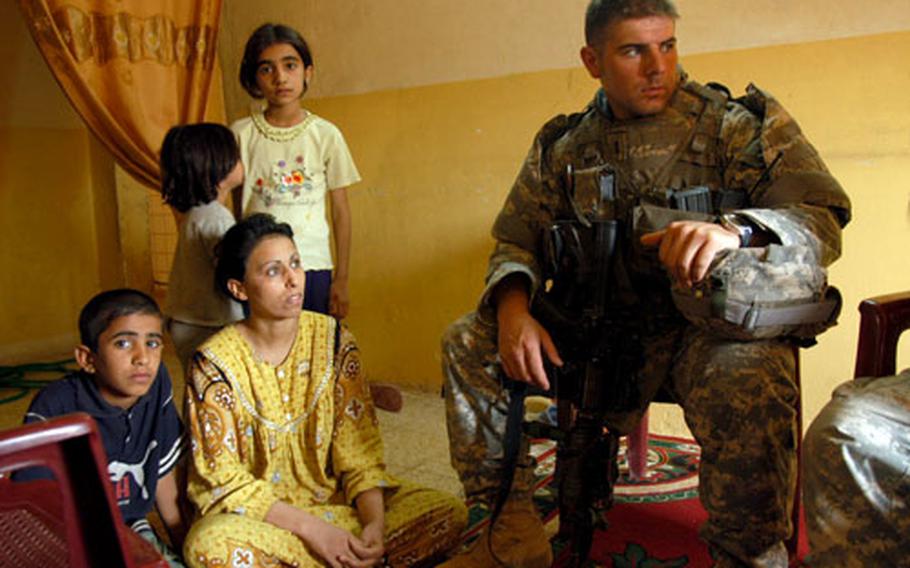 First Lt. Michael McCave listens to an interpreter translate for an Iraqi woman and three of her children. The woman, a widowed mother of five, lives in a ramshackle complex called the Hussein Apartments, where McCave said upward of 70 “bad guys” may be housed. (Ben Murray / S&S)

First Lt. Michael McCave listens to an interpreter translate for an Iraqi woman and three of her children. The woman, a widowed mother of five, lives in a ramshackle complex called the Hussein Apartments, where McCave said upward of 70 “bad guys” may be housed. (Ben Murray / S&S) Sgt. Aric Zern scans a riverbed for threats Friday at a roadside stop in Kirkuk, where members of Company B, 35th Infantry Regiment, pulled over to talk to two Iraqi men sitting in a car in an abandoned construction lot. The men were just there to have a drink. (Ben Murray / S&S)

KIRKUK, Iraq &#8212; On the third floor of a ramshackle housing complex in northeastern Kirkuk where scores of insurgents are rumored to live, 1st Lt. Michael McCave and two members of his squad gathered around a dented metal door Sunday and arranged themselves to go in.

It was the kind of door soldiers in Company B, 2nd Battalion, 35th Infantry Regiment, 25th Infantry Division might otherwise want to kick down, but this time McCave just knocked.

A few seconds later, a woman answered and the soldiers presented her with a small bag of toys for her children. It was a type of visit McCave and his fellow soldiers make regularly in their sector of this city of about 775,000 people in north-central Iraq, part of a patrol that touched on many of their objectives in Kirkuk.

McCave&#8217;s squad was in Hussein Apartments to make a show of force in an area known to be less-than-friendly, and to gather intelligence from a friendly source about recent events in the area.

The soldiers only got to talk to the widowed mother of five for about 10 minutes, however, before a hollow metallic pop echoed in through the window.

The soldiers left quickly to respond to the reported roadside bomb, but by the time they got to their Humvees someone else was on their way, and instead they diverted to perform some &#8220;route reconnaissance&#8221; around the sector.

For the 3rd Platoon, the afternoon included elements of much of the unit&#8217;s work in the oil-rich city about 160 miles from Baghdad.

A great portion of the soldiers&#8217; effort in the city is aimed at maintaining stability, rooting out pockets of insurgents and &#8220;legitimizing&#8221; Iraqi police forces.

Earlier in the day, the platoon had made its daily visit to a police station in its area after the original plan for the afternoon &#8212; to deliver supplies to local schools &#8212; was scrubbed because the materials weren&#8217;t ready.

The squad&#8217;s mission reflected, in part, the situation in a city defined by its status as a multiethnic metropolis shared by Kurds, Sunni Muslims, Turkomens and others.

Originally Kurdish, it underwent a period of forced &#8220;Arabization&#8221; under Saddam Hussein that forced out many original inhabitants and moved in Sunni Muslims.

Since the invasion and overthrow of the dictator, however, the Kurds have made a return. The groups are now at loggerheads over who has a majority, and whether the city&#8217;s future &#8212; and oil &#8212; should lie with the Kurdish north or the Arab south.

Either way, the American military is received well in some parts of the city, though the reception is cooler in the poorer, often Arab, areas, soldiers said.

Soldiers said the level of violence directed at the U.S. military has been low since they arrived about eight weeks ago from Schofield Barracks, Hawaii, to replace elements of the 101st Airborne Division. But attacks have picked up in recent days, soldiers said.

McCave said the group had a scare not long ago when it came through one of the gates at Forward Operating Base Warrior, just before a truck loaded with hundreds of pounds of explosives detonated near the entrance. Roadside bomb attacks also persist throughout the city.