The Bartelses: Hardship and heartache 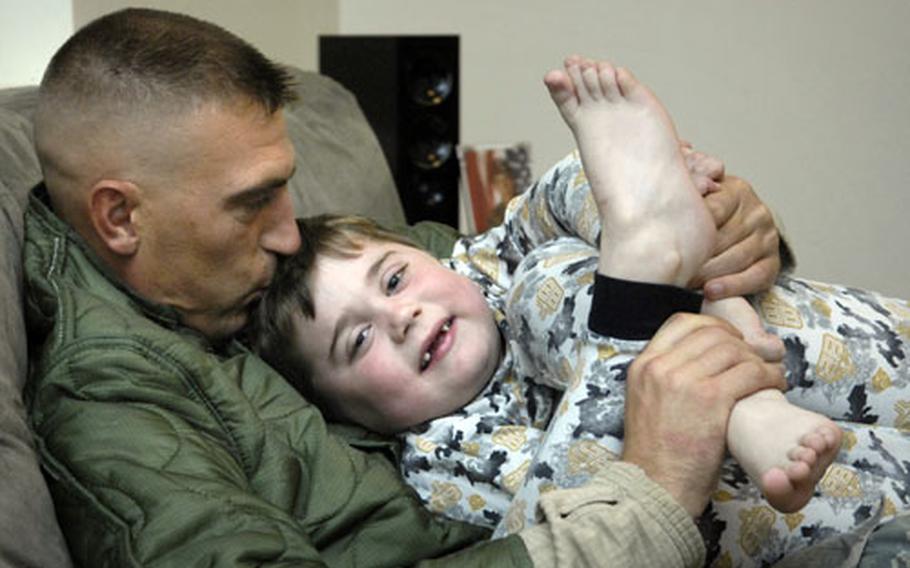 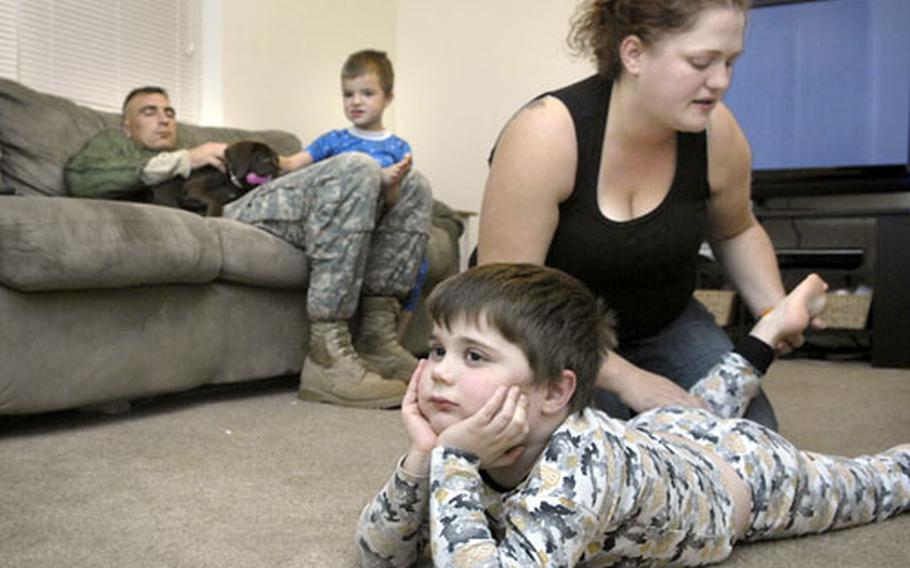 Lynn Bartell goes through her evening stretch routine with son Jacob as husband Sgt. Chris Bartell hangs out with their son Steel on Oct. 29 in their base house at Fort Drum, N.Y. (Ben Bloker / Stripes) 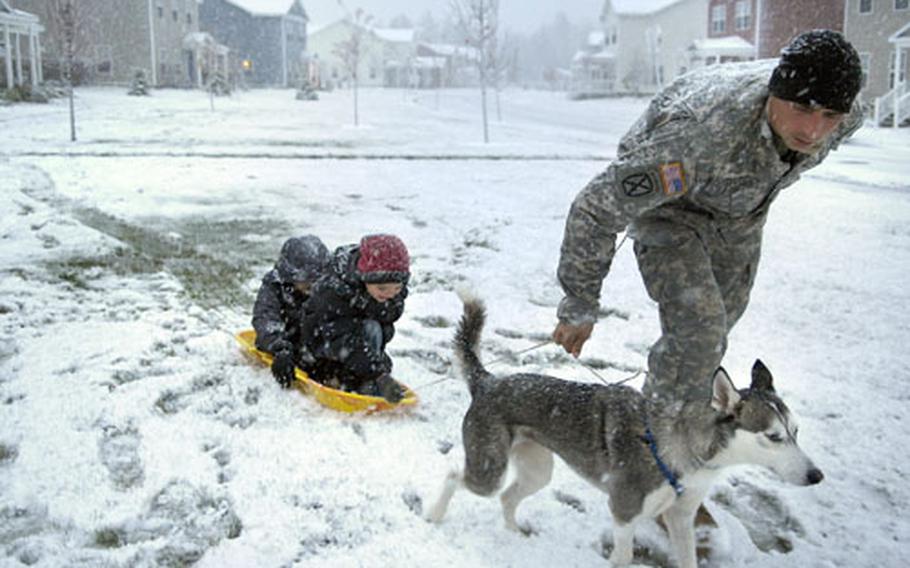 Sgt. Chris Bartell helps his dog Frosty give sons Jacob and Steel a sled ride during fresh snowfall Oct. 29th, 2008 in front of their base house on Ft. Drum, N.Y. (Ben Bloker / Stripes)

Lynn Bartels is an Army brat, practiced in the separations and loneliness the military doles out to wives and daughters &mdash; and equally in the ethos that you just don&rsquo;t complain about it.

Her father was Special Forces, gone a lot and not a soft touch. "My dad was very much, &lsquo;Suck it up, buttercup.&rsquo;

"I don&rsquo;t say that to any of the wives," said Lynn, who served as leader of Company B&rsquo;s Family Readiness Group. "It&rsquo;s not nice."

Lynn is; she exudes a sort of gentleness and calm, and what also looks like sorrow.

Some six months before her husband, Chris, deployed to Iraq for 14 months, the Bartels&rsquo; son Jacob &mdash; an unusually chatty, chubby-cheeked 7-year-old &mdash; was diagnosed with Duchenne muscular dystrophy. It&rsquo;s an inherited, fatal muscle-wasting disease that only afflicts boys. There is no cure.

Lynn sucked it up.

"How do you do it when your husband&rsquo;s deployed? You just do it," Lynn said. "You don&rsquo;t say, &lsquo;Pity me, pity me.&rsquo; You can do that all day. It doesn&rsquo;t change anything."

The Bartels&rsquo; resilience in the face of the usual hardships for families in an Army constantly at war would be notable on its own. But they must struggle in the midst of all those hardships with a personal tragedy that would shake any family&rsquo;s foundations, no matter how settled.

Chris, from a Nevada desert town, said being a soldier is what he&rsquo;s wanted since he was 5 years old. The Marine Corps took him around the world, he said, but provided fewer advancement opportunities than the Army. But his deployment with the Triple Deuce, he said, was notable mostly for its tedium.

"It was a whole lot of driving around," he said. "You go to this spot, check out some people, get back in the truck and drive around some more. A lot of frigging hanging out, walking around. Don&rsquo;t get me wrong: Some serious bad stuff happened out there. But I expected it to be a lot worse."

He said he thought about his family: his wife, Jacob and Steel, his nephew, whom the couple adopted at 14 months when the state of Nevada was about to take custody of him, along with four siblings, because of neglect.

But Chris didn&rsquo;t worry. "I know she&rsquo;s calm and capable," he said. "She&rsquo;s proven it over and over again. So I don&rsquo;t have to be distracted. And there was nothing I can do about it then."

Lynn said she married Chris with her eyes wide open.

"I married him knowing I&rsquo;d be a single mom some of the time," she said.

His deployment was expected and accepted.

But Lynn worried. "Every time someone knocks on the door &mdash; your heart &mdash; you ask, &lsquo;Do I really want to answer the door?&rsquo; "

The suicide truck bombing in June at what is now Patrol Base Pickett that killed one soldier and wounded many more provided her worst moments.

"When they called, they just said there had been an incident at the base. They didn&rsquo;t start off with, &lsquo;Your husband is fine.&rsquo; &hellip; I couldn&rsquo;t breathe for a moment. Then you feel guilty for feeling relieved."

The bombing had a tremendous effect on soldiers like Chris, who were doing their two-week rotation at the patrol base. Afterward, he said, "I couldn&rsquo;t sleep there. Everything would get on my nerves. I really had some issues. Then as soon as I came off the patrol base, I&rsquo;d be all right."

Home for less than a week, Chris said the only difference he recognized in himself was that maybe his sleep was still not back to normal.

"Nothing really bothers me," he said. "I&rsquo;m just happy to be here."

The two had made a pact that he would slowly resume his place in the household, refraining from making changes or decisions for two weeks. That was working, they said. Chris was chafing just slightly at what he termed Lynn&rsquo;s "over-momism."

"If I wanted a mom, I could probably move back into the house," he said.

The two have made an effort not to coddle Jacob, although they watch him closely.

Jacob takes a steroid the Bartelses get from Britain to help control his symptoms. It has fewer side effects than prednisone &mdash; less weight gain, fewer rages &mdash; but is still classified by the FDA as experimental. Tricare won&rsquo;t pay for it. It costs the Bartelses $162 for a 40-day supply.

Lynn has become an expert on Duchenne, and on deflecting the pity that overcomes people when they see Jacob and hear about his disease.

"People would say, &lsquo;Oh, that&rsquo;s so sad,&rsquo; " she said. "But you should learn more about it. It&rsquo;s one in 3,500 boys. We didn&rsquo;t know the warning signs."

The muscle wasting begins in the legs and pelvis, then progresses to the shoulders and neck, followed by the arms and finally the respiratory muscles. Boys with Duchenne, the most common form of muscular dystrophy, usually tire more easily and have less overall strength than other boys.

Jacob&rsquo;s disease is expected to put him in a wheelchair by the time he&rsquo;s about 13. His life expectancy is anywhere between his teens and 30s, but the Bartelses are hoping for a cure.

Duchenne is inherited from a gene mutation from the mother, from the tiniest snippet of missing DNA in a gene. Lynn explains that if the DNA were a sentence, Jacob is missing the "d" in the sentence "The dog ran."

"It&rsquo;s just that tiny, tiny letter, and it makes no sense," Lynn said. "I felt really guilty. I thought, &lsquo;He&rsquo;s going to hate me. I gave my child a disease that&rsquo;s going to kill him.&rsquo; "

Chris has tried to reassure her.

"So there&rsquo;s something wrong with your gene. That&rsquo;s not who you are," he told her. "You didn&rsquo;t purposely inject him with something. Come on."

"I think I was the one with the harder time with it," she said. Looking at her husband, she said, "I got really lucky."

He&rsquo;s a career soldier. In May, the family will move to Fort Bliss in Texas; Lynn expects her husband will deploy just after they arrive.

In October, 2008, the Bartells and other 2-22 families at Fort Drum were awaiting the return of their loved ones from Iraq. As barracks were being readied for single soldiers, wives met to hear the latest information and kids prepared "welcome home" banners.